In many photos and videos doing the rounds on social media, some of the legislators are seen doing yoga in the hotel lawn, crowding around a chef cooking food, watching movies and playing carrom. 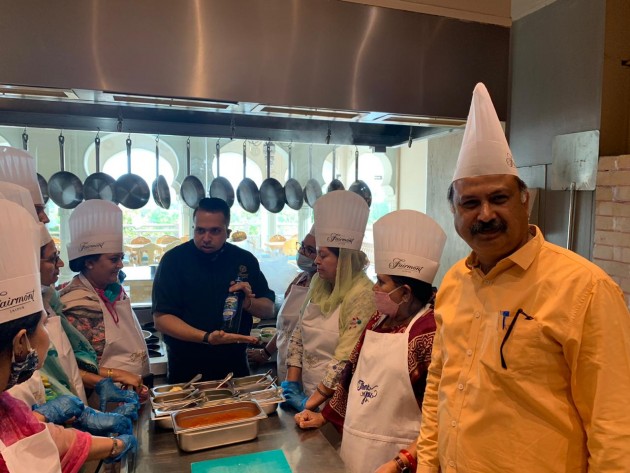 It's not everyday that one gets to see former Olympian and Congress MLA Krishna Poonia sporting a chef's uniform and learning the nuances of preparing Italian cuisine inside a five-star hotel. She is flanked by Rafeek Khan, the burly Congress MLA from Adarsh Nagar in Jaipur, known for his presence in anti-CAA protests. Peering over the shoulder of the hotel chef, who is conducting the class, is Rajasthan Women and Child Development Minister Mamta Bhupesh.

As the Congress in Rajasthan faces an uphill task of saving the Ashok Gehlot-led government from an open rebellion by his former deputy Sachin Pilot and 18 of his loyalist MLAs, around 100 MLAs from the Gehlot camp, including independents, currently herded inside the Hotel Fairmont in Jaipur, are killing time by watching Bollywood movies, learning new recipes, meditation and brushing up their yoga regimes inside the hotel.

On Friday night, Mughal-e-Azam, Indian epic historical drama film directed by K. Asif, was screened for the MLAs staying in the hotel. "We collectively shortlisted Mughal-e-Azam out of three choices. It was a different experience of watching this film with colleagues," a Congress MLA and one of the inmates at the hotel told Outlook.

Interestingly, in photos shared by the insiders, MLAs dressed up in casual attire are seen performing yoga and meditation and different kinds of exercises in the hotel lawns. Most of them are seen without a face mask, with social distancing going for a toss in the photos. "We begin our day on a healthy note by doing regular work out and drinking lemon tea. We do exercises inside the hall or in the lawns of the hotel," another Congress leader staying in the same luxury hotel from last one week told Outlook.

Contrary to this jovial atmosphere inside, the hotel is also a venue for daily press conferences by senior Congress leaders, where they don't mince any words slamming the BJP and Pilot, who they accuse of hatching a plan to topple the elected government.

Moreover, special cooking classes were organised for the MLAs where professional chefs of the hotel trained them to cook Italian food and continental recepie. "We learnt to cook authentic Italian dishes such as authentic pastas, pizzas, spaghetti noodles, risotto etc. Also we tried our hands on learning continental dishes," shared an MLA who claims that the camping inside the hotel has helped building bonhomie within among MLAs.

While MLAs continue to look forward to a lean weekend inside the hotel, the uncertainty in the government continues. On Monday, the Rajasthan High Court will resume its hearing on the rebel MLAs petition against the disqualification notices issued to them, for "anti-party activities" by the speaker of Rajasthan CP Joshi.

Despite facing the rebellion by Pilot and 18 other MLAs, Congress is claiming to have the support of 109 MLAs and the same was also conveyed to the Governor of the state by Chief Minister Ashok Gehlot. On Satirday, two MLAs of BTP also extended their support to the Congress. However, a closer look at the numbers suggests that without the 19 rebel legislators including Pilot, the ruling government has the support of around 103 MLAs including 88 Congress + 01 RLD + 10 Independents + 02 BTP + 2 CPI (M) MLAs in the Assembly.

In a possible scenario wherein rebel MLAs are allowed to take part in a floor test and they cast their vote against the Congress government, then the collective support of anti-Congress votes will stand at 97 MLAs (72 BJP + 19 Congress Rebels + 03 RLP + 03 independent MLAs), assuming that the three independents who are being investigated by Anti Corruption Bureau vote against the Gehlot government.

At present in the House of 200 MLAs in the State Assembly, including the 19 rebel legislators, the Congress has 107 MLAs -- six of them are originally from Mayawati's Bahujan Samaj Party and changed camp last year. It also has the support of at least a dozen independent MLAs. Whereas, BJP has 72 of its own MLAs and the support of three Rashtriya Loktantrik Party MLAs.