No, it's not the famous even-odd rule that the people of Delhi are familiar with, but something similar, aimed at keeping fewer vehicles on roads. 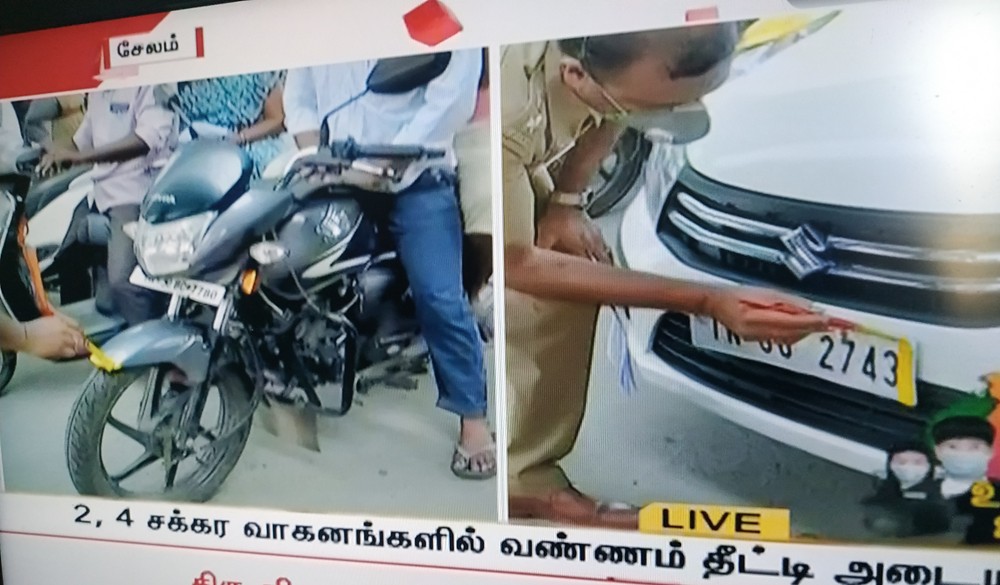 Police in Tamil Nadu's Salem town have found an interesting way to reduce the number of vehicles on the road and hence the movement of people during the lockdown, announced two weeks ago to contain the spread of the deadly Coronavirus.

No, it's not the famous even-odd rule that the people of Delhi are familiar with, but something similar, aimed at keeping fewer vehicles out on roads. On Thursday, the police painted the edges of car number plates and mudguards of two-wheelers Yellow. The following day, they did the same but this time the colour was Red. On Sunday and Monday, two more colours are expected to be used.

Beginning next week, the police will allow only the vehicles, marked with the assigned colour for the day, to ply. So, the ones marked blue will be allowed on Sundays and three days later on Thursdays, brown on Mondays and Fridays, yellow on Tuesdays and Saturdays and red on Wednesdays and Sundays. Only Sunday has been assigned two colours.

This will ensure people use colour-coded vehicles to come out for groceries and vegetables on specific days. “We accept that people have to come out to buy their essentials. But they need not be out there every day. We are restricting it to just twice a week and that too between 6 am and 1 pm when shops are allowed to function,” said Senthilkumar Deputy Commissioner of Salem.

If the wrongly coloured vehicle is out for a non-emergency purpose, it will be seized and the owner can recover it only after paying the fine in the court. Since courts are closed, that can happen only after the lockdown is lifted. “Only when they rough it out without a vehicle at their disposal will people realise the need to follow the law,” he pointed out.

The Salem experiment is aimed at curbing the explosion of vehicles on the roads despite the lockdown especially during the morning hours when the markets open for groceries and veggies. The cops publicised the formula in the local papers and urged the public to get their vehicles colour-coded at the nearest traffic signal.

But those with two vehicles – one two-wheeler and one car – can still beat the system with two different colour codes and be out on four days in a week.