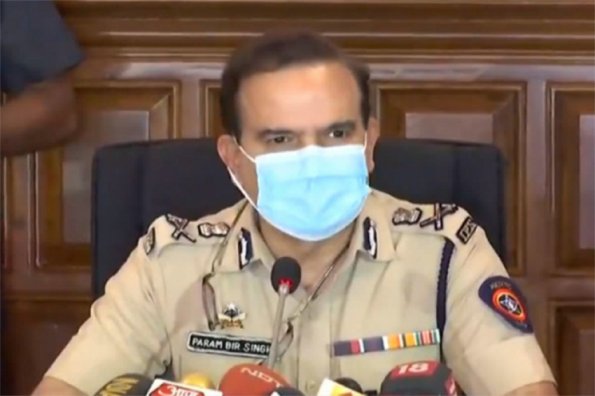 Last week, Singh had written a letter to Maharashtra Chief Minister Uddhav Thackeray, alleging that Deshmukh used to call police officers to his official residence and give them a "collection target" asking them to collect funds worth at least Rs 100 crore per month from bars, restaurants and other establishments in Mumbai.

Raising the issue during Zero Hour in Lok Sabha, the BJP demanded the MVA government to step down.

BJP member Manoj Kotak said Singh’s letter reflected that those who are in the government were using officials to indulge in corruption but the chief minister so far has not uttered a single word on the issue. "It is a serious matter. The home minister should resign, the Maharashtra government should resign and there should be a CBI inquiry into the whole issue," he said.

BJP member Rakesh Singh that the issue is so serious that it can't be termed a state subject as it has a national implication.

Singh said that the former police commissioner's letter showed that the top functionaries of the Shiv Sena-NCP-Congress government were involved in collecting huge amounts of money through illegal means.

"The allegation against the state home minister was made by none other than the former police commissioner. What was the compulsion of the chief minister to defend an API-rank official, who was in suspension for 16 years, in a press conference," he asked.

Singh claimed that a senior politician from the state had changed his stand after telling that it was a serious matter and there should be an inquiry into it.

"What is the fear. Is there any fear of spilling the beans about those who get cut. If Rs 100 crore collected from Mumbai alone, what would be the figure for the entire Maharashtra," he asked.

He demanded that the MVA government should immediately resign and there should be an impartial inquiry into it.

Another BJP member Kapil Patil said that it was not for the first that such a letter has been written by a senior police officer and even a DGP-rank officer had written a similar letter in the past.

"A senior leader had said that it is a serious matter but he changed his tune overnight. What is the fear? Fear of spilling the beans?" he asked.

However, Shiv Sena member Vinayak Raut strongly defended the MVA government and claimed that the BJP has been hatching a conspiracy to defame the Shiv Sena-Congress-NCP dispensation for the last 14 months so that a BJP government can be installed in Mumbai.

"The issue is nothing but part of BJP's big conspiracy," he claimed.

Raut alleged the former Mumbai police commissioner who wrote the sensational letter was the "most corrupt police officer".

The Shiv Sena, the NCP and the Congress part of the MVA government in Maharashtra.

Congress leader in Lok Sabha Ravneet Singh Bittu claimed that the central agencies were being used against opposition ruled states for one or the other pretext.

"Why such things are happening in opposition ruled states. It is not only in Maharashtra but across the country that the central agencies are being used to destabilise the opposition ruled government," he alleged.

Independent MP from Maharashtra Navneet Rana claimed that the present chief minister had spoken to the then chief minister Devendra Fadnavis for reinstatement of Waze when he was under suspension.

"The then chief minister had flatly refused. But when the current chief minister took charge, the first decision he took was to reinstate Vaze. Because of the chief minister such things are happening in Maharahstra," she asked.

BJP member Poonam Mahajan said if Rs 100 crore is collected every month from Mumbai, for five years the amount would be Rs 6,000 crore.

Mahajan said the NCP leader's statement convey that no one will resign even if they take illegal money.

Meanwhile, NCP member Supriya Sule accused the treasury benches of rigging the 'zero-hour' saying that while eight members from one side were allowed to speak on the Maharashtra issue, no one from the other side was given the chance.

Participating in the discussion on the Insurance Amendment Bill, she said, "It is a black day for democracy."

She said those who do not create disruptions or enter the well of the House should not be penalised for following the rules and their voices should not be curbed.

Sule also wondered how could the BJP speak with so much ill-will against its former and long-term ally Shiv Sena and its leader Uddhav Thackeray.

Days after he was shunted out, Singh wrote a letter to Thackeray alleging that the state home minister had asked Sachin Waze, currently in custody of the National Investigation Agency (NIA), and other police officers to collect Rs 100 crore monthly, including Rs 50 crore to Rs 60 crore from bars and restaurants in Mumbai.

Deshmukh had denied these allegations.

The NIA is probing Vaze's alleged role in placing an explosives-laden SUV outside industrialist Mukesh Ambani's residence on February 25.

The SUV was in possession of Thane-based businessman Mansukh Hiran, who was found dead at a creek near Mumbai. The case related to the death of Hiran was also handed over to the NIA.