BJP, slammed for holding large crowded rallies, is planning to keep celebrations low-key as the second wave of coronavirus continues to ravage the country 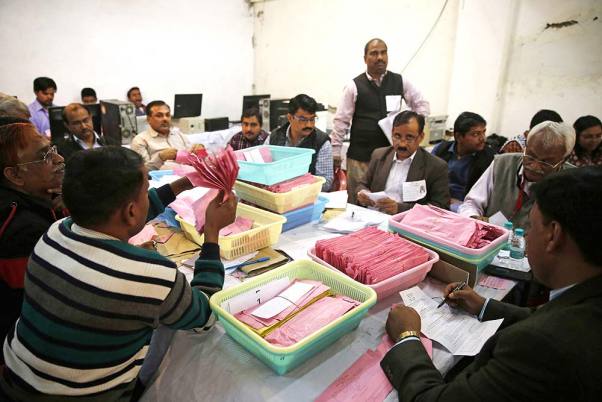 The much-awaited counting of votes for the bitterly contested Assembly polls in West Bengal, Assam, Tamil Nadu, Kerala and Puducherry will start at 8 am tomorrow morning under the Covid-19 cloud. The voting that extended over a month – with polling in West Bengal stretching across long eight phases – the political parties, especially the BJP had come under severe criticism for holding large crowded political rallies as the pandemic raged.

Seemingly chastened, the BJP is now in damage-control mode. Even if the BJP does win Bengal – which is expected to be a close fight as per the exit polls -- one is not likely to see a grand victory procession like the one after the Bihar win in November last year, when Prime Minister Narendra Modi – flanked by home minister Amit Shah and BJP president J.P. Nadda --- addressed thousands of party workers gathered at the BJP headquarters in the Capital. It was there that he threw a gauntlet at Mamata Banerjee’s Trinamool Congress, asking her to read the writing on the wall.

However, this time it is going to be a sedate affair, even in case of victory. It has conveyed to all its party workers to strictly follow the guidelines laid by the Election Commission of India (ECI). No crowding, no victory processions and no vulgar celebrations. And no ubiquitous “laddoos”, the order for which is usually placed by the party well in advance.

An SOP For The New Governments Please

Instead, the BJP has this time ordered thousands of N-95 masks, sanitizers, face shields and gloves for its polling agents and workers, who will be stationed at various counting centres in the four states and a UT. This is in keeping with the EC directives. The candidates and polling agents have all undergone RT-PCR tests on an urgent basis.

“This is required as per the EC directives but the party also has to appear sober and sombre, in keeping with the mood of the country. Enough damage has been caused by the political rallies, addressed by the top leaders,” says a senior leader.

To ensure there are no aberrations and the message goes down to all the party workers, BJP Rajya Sabha member and national general secretary Arun Singh issued a statement today. “India is suffering from a dangerous phase of Covid-19. Lakhs of people are getting infected. The central government led by Prime Minister Narendra Modi is working hard to help fellow Indians and to defeat the second wave of coronavirus,” the statement said. He exhorted the party workers to follow the EC guidelines strictly.

The ECI was pulled up by the Madras High Court for allowing the political leaders to continue the rallies without enforcing Covid-appropriate behaviour and guidelines. The court had wondered if the constitutional body should be booked for murder and then directed it to prepare a fool-proof blueprint for counting day. In addition to banning victory processions, the ECI ordered not more than two people will be allowed to accompany the winning candidate or his/her authorised representative to receive the certificate of election from the returning officer concerned.