UPA chairperson Sonia Gandhi said her heart was 'filled with grief and a sense of loss' as the veteran Congress leader 'occupied a huge space in it'. 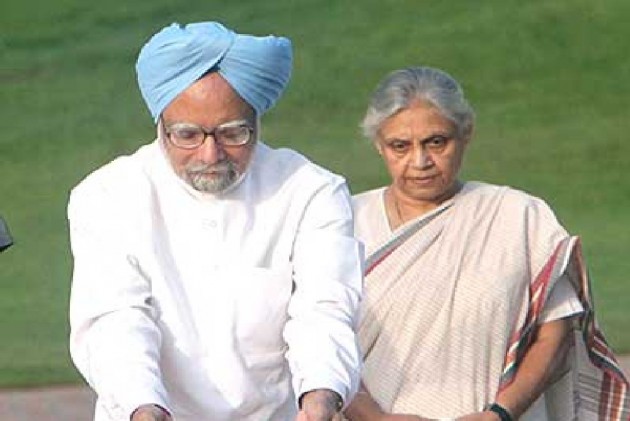 UPA chairperson Sonia Gandhi said her heart was "filled with grief and a sense of loss" as the veteran Congress leader "occupied a huge space in it".

Dikshit passed away at a private hospital in Delhi on Saturday afternoon. She was 81.

"I am shocked to hear of the sudden passing away of Smt Sheila Dikshit. In her death, the country has lost a dedicated Congress leader of the masses. People of Delhi will always remember her contribution to the development during her three tenures as Chief Minister of Delhi," Singh said in a message.

Later, in a letter to the former chief minister's son, Sandeep Dikshit, he said the people of Delhi will remember her as the leader who transformed the national capital into a world-class city.

"This is a huge loss to both the Congress party and Delhi. The Congress party workers will remember her as someone who always stepped up and fought for the party whenever the situation demanded," the former prime minister said.

"The people of Delhi will always remember her as a popular leader and distinguished Chief Minister who led them for 15 years and transformed New Delhi into a world-class capital city. She will always be remembered for her contributions towards the development and growth of New Delhi," he said.

"Everyone who knew her across party lines will always remember her grace, generosity and warmth," he added.

"I write to you with my heart filled with grief and a great sense of loss, for your beloved mother occupied a huge space in it. I came to share my husband's regard for Sheilaji and to value her very special gifts as I developed my own close relationship with her," the UPA chairperson said.

"She worked with such vision and dedication to transform Delhi, to make it a much better place to live in for all its citizens, including the poorest, and that tremendous achievement remains her lasting legacy," she added.

Surjewala described Dikshit as a "conscientious administrator", "dedicated soldier of party", and the "woman who reshaped Delhi".

"We'll always miss you, and so will Delhi," he said in a tweet.

Sharma said it is truly the end of the era of her stature of leaders, not in Delhi but nationally.

"Deeply saddened by the demise of Sheila Dikshit, a popular CM and veteran leader. She was truly an end of an era of her stature of leaders, not in Delhi but nationally," he said.

"She will be remembered for her compassion, humanity and visionary leadership in the transformation of Delhi into a world class capital city with modern infrastructure. He said generations will remember her with respect towards her contribution. Her death has left a deep void and she will be missed by all," he added.

Punjab Chief Minister and Congress leader Amarinder Singh described Dikshit as "a rare gem of a human being".

"Sheila Dikshit's presence will be sorely missed not just in the Congress but by the people of Delhi, where she had toiled during her three terms as chief minister, to build a modern, vibrant and dynamic new city to meet their aspirations," he said in a statement in Chandigarh.

The Punjab chief minister said that for him, it was a personal loss as she had always been like an elder sister to him, in whom he found guidance and support during the difficult moments and decisions of his life.