Experts have attributed the rise in cases to people letting their guard down. 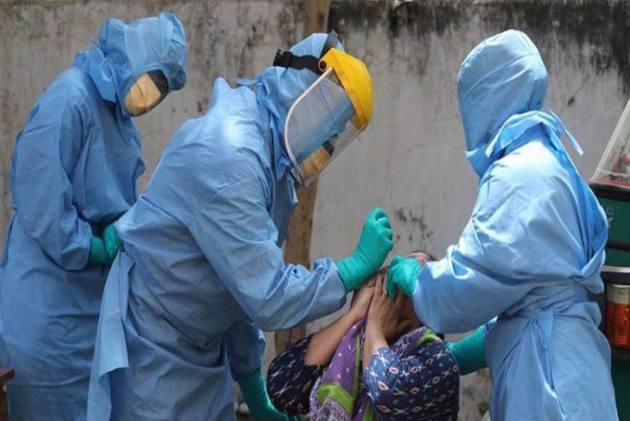 India recorded over 13,000 fresh cases of Covid-19 in 24 hours after a span of 19 days taking the nation’s total tally to 1,09,63,394. Experts attribute the spike in cases to increased economic activity and complacency among people.

The number of people who have recuperated from the disease surged to 1,06,67,741 which gives a national Covid-19 recovery rate of 97.30 per cent while the case fatality rate stands at 1.42 per cent.

Active coronavirus cases across the country remain below 1.5 lakh. There are 1,39,542 active cases of coronavirus infections in the country which comprises 1.27 per cent of the total caseload, the data stated.

The 97 new fatalities include 38 from Maharashtra, 14 from Kerala, and 10 from Punjab.

"Our figures are being reconciled with the Indian Council of  Medical Research," the ministry said on its website, adding that state-wise distribution of figures is subject to further verification and reconciliation.

Experts have attributed the rise in cases to people letting their guard down.

Dr. Samiran Panda, head (epidemiology and communicable diseases division), ICMR said it is always a cause of concern if the number of cases goes up.

"If the number of reported cases go up, it is always a cause of concern for any state. These cases will not only happen in young adults but also in the elderly population with co-morbidities that is a reason for worry. The reason (for rise)  is the same that when a susceptible population comes close to the infected people the infection transmits from the infected person to the susceptible person," he told PTI.

"This is the time we should have our preventive measures maintained. We have a vaccine but it is one of the prevention measures. So maintaining physical distancing, limiting social interaction should be followed. If people go out for marriage ceremonies, parties it leads to transmission," Panda said.

Noted virologist Shahid Jameel said the easy explanation for the rise in cases is increased activity and complacency.

"A majority of people have stopped wearing masks thinking that it's over. This at a time of increased economic activity and person-to-person contacts. There could also be unique local factors like local trains in Mumbai, cold weather and indoor activity in J-K etc. But a more worrisome thought is if variants might be responsible? Our genomic sequencing density is not high enough to pick this early," he said.