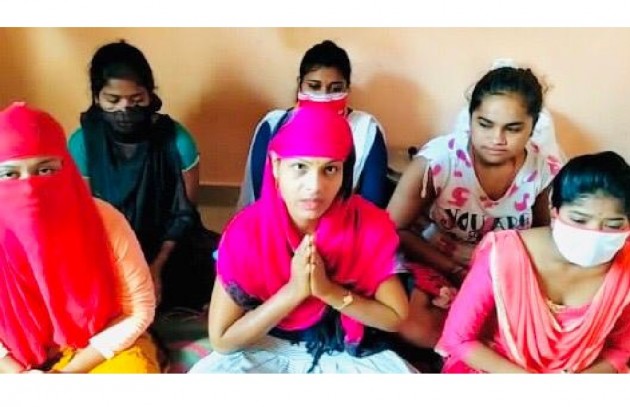 Golap Swain, 30, from Siko village of Odisha’s Khordha district has been waiting desperately to return home. She and other women migrants, who work in a garment factory in Bengaluru, have registered on the Odisha government’s portal, but there is no sign of their travel arrangements.

“We are only waiting to go home and stay with our family. We are not interested in work. The company owner keeps us to meet the target. The rising number of Covid-19 cases creates anxiety and fear within us. If anything happens and we die, our bodies will be left unnoticed,” says Golap with a mix of tears and anger.

The desperate women migrant workers working in garment, spinning and textile factories of Tamil Nadu and Karnataka states made videos pleading to Odisha Chief Minister to listen to their plights. Since the lockdown, they have been making distress calls to families, friends, village representatives and activists in Odisha to take them back to the state. “We think the Odisha government is not willing to take us. There is a nexus between employer, recruitment agencies in Odisha and the local police here. Now factories have started operating and we are forced to work. We are even asked to work 12 hours for two days in a week”, says Chinmayee Sahu another migrant worker. 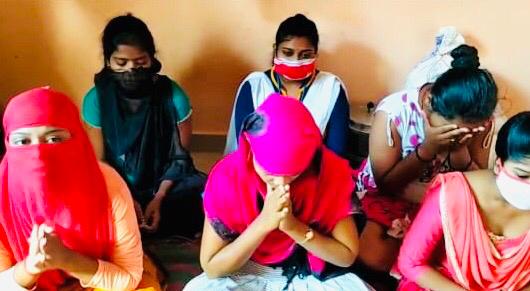 Golap Swain and other women migrants working in a garment factory in Bengaluru pleading with folded hands to go back home (Courtesy: ODMMI)

Odisha Distress Mapping and Mitigation Initiative (ODMMI), a WhatsApp group of volunteers working for stranded Odia migrants received a number of videos and distress calls from these migrants. Rajaram Sundaresan, a volunteer of ODMMI, with the help of AICCTU intervened and spoke with these migrants in Coimbatore.

“The Covid-19 situation is creating fear, anxiety and panic among them and they want to return. The Odisha government should discuss with the destination states and factory owners to arrange their travel. If delayed they may take some drastic steps,” he says.
Largest women migrant workforce

Earlier local young women were recruited in these garment and textile industries. But for the last few years, young women aged between 18 and 30 from poor and impoverished families of Odisha, Jharkhand, Bihar, West Bengal and Assam started replacing local workers. According to a study, more than 5 lakh workers from these states are recruited in 1,200 factories in Karnataka. In Odisha, young women from tribal, Dalit and other marginalized communities are mobilized, trained and recruited under government’s Skill India scheme. Besides this, single women through friends and relatives are recruited in these factories.

Once recruited they have to face difficulties of long working hours, low wages, restricted mobility, language problem, physical, verbal and mental harassment and regular threat to lay off from work. “These women are forced to work in semi-bondage conditions and being poor and hailing from rural areas, they are forced to be voiceless at their workplaces”, says Sunderasan adding, language problem and restricted mobility keep them away from joining unions. 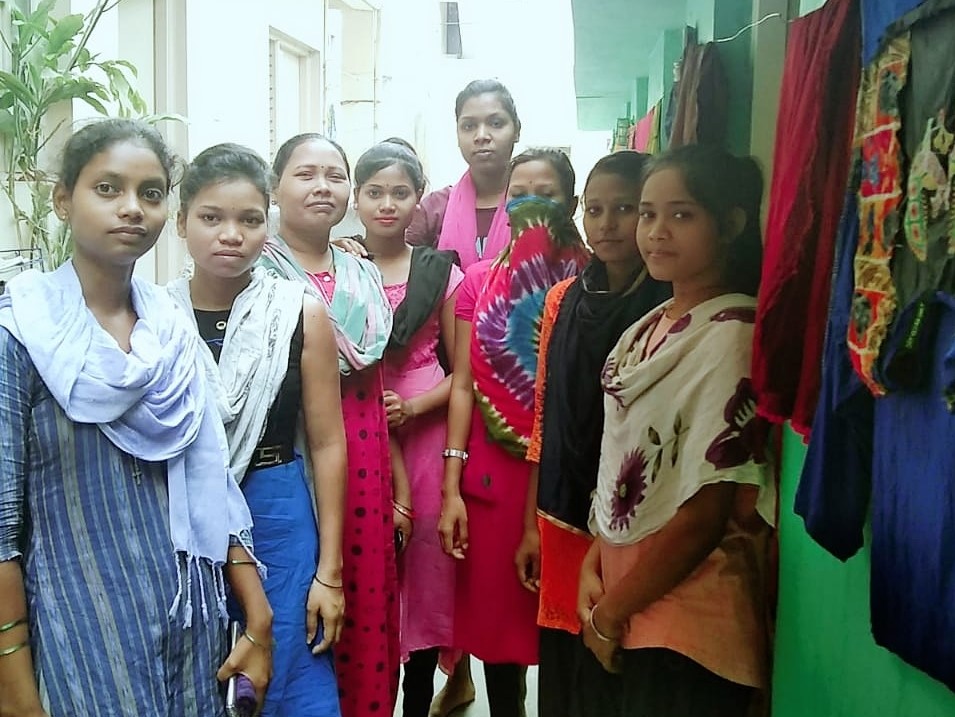 They are usually first-generation migrants. The reasons for migration are lack of employment in their villages, an opportunity of livelihood, burden of feeding family, need to pay off dowries and aspiration of city life. The decision of their migration is taken by their family, not by them. The field staff of PIAs (Project Implementation Agency) convinces parents that their daughters are working in safer places. “In this pandemic situation, both family and their daughters are in fear and anxiety. When all stranded migrants are retuning homes, these women also want to return and Odisha government should intervene to bring them back”, says an employee of one Project Implementation Agency (PIA) who didn’t want to be named.

Now the factories have opened and they are asked to do 12 hours for two days in a week. “To meet the target demand the company owners are keeping us here and not willing to send us back”, says Sumati Munda. In Tirupur, the women migrants protested against forced work and non-payment. They made videos and sent to activists and media houses in Odisha. Later, with interventions of the state administrations, they boarded the train back home.

Sukumari Munda, 20, says they are yet to receive their dues since March. “We are working in a small factory and due to lockdown, the work was stopped. The factory has started operating only a few days back, once they clear our dues we will return”, she says.

Karuppusamy Raman, Director, READ, an NGO works for the rights of underprivileged in Tamil Nadu says: “There is a complete lack of coordination between the source and destination states and factory owners. It is the right of women workers to go home. But before they leave their due wages need to be settled”.

The Factories Act 1948 deals with occupational safety and health conditions at work. Under the Act, employers are required to take adequate measures to ensure the safety and health of workers. With the Covid-19 pandemic around, Golapsays: “We are maintaining physical distancing, wearing masks and using sanitizer at the factory. During the screening, if the body temperature shows higher than the prescribed limit we are asked to go”. On the other handSukumari says they are working in a small factory and don’t have enough space to maintain physical distancing, they are only wearing masks to protect themselves. 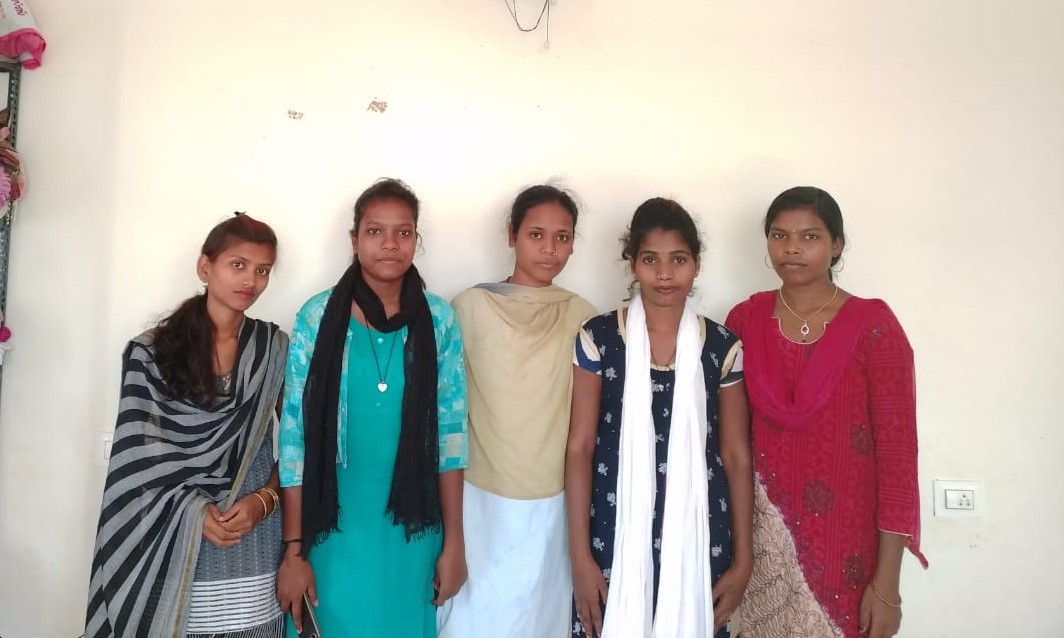 Prof Asha Hans, who did a study on women migrant workers says: “During our visit to Tirupur and Bengaluru we noticed there were 10-15 women staying in one small room with the regular scarcity of water. Thus, it would not be possible for them to follow physical distancing and regular hand wash.” Some factories don’t have sufficient toilets and clean drinking water facilities for women workers. There is no sick leaves, government holidays or compensatory offs. If they go home and take leave for nearly a month they are replaced by another worker. “When they are not allowed to go to the washroom to avoid wasting time how they will be allowed to clean hands at regular intervals to avoid infection”, she asks.

Prof Chinmay Tumbe, Assistant Professor, Economics Area, IIM, Ahmedabad and author of the book “India Moving” says: “There is going to be a large labour gap and employers will have to provide better assurances on workers safety and better wages in order to induce migrants to come back. They will eventually come back as wages start to spiral up, reflecting the shortfall”.

Activist Sneha Mishra, who has been counselling these women says: “Almost all of them want to return. At least for the next few months, they want to stay with their families”, adding, the pandemic will have an adverse impact on women migrants than men. Families may not allow them to migrate again which will lead to job loss, prone to early marriage, domestic violence and trafficking.

Umi Daniel, Director, Aide et Action says “Government should evacuate them on a priority basis, counsel them and provide financial incentives for next 2-3 months to sustain them. These young women are trained in certain skills and are supporting their families. If they want to return government should ensure them to reclaim their jobs in the factories they were working”. Most of the women migrant will decide whether to return or not when the situation eases. Right now, all they want to do is go back home.