The pandemic situation in the country has worsened with a sharp rise in cases and a large part of the population is still susceptible to the virus, said the Centre 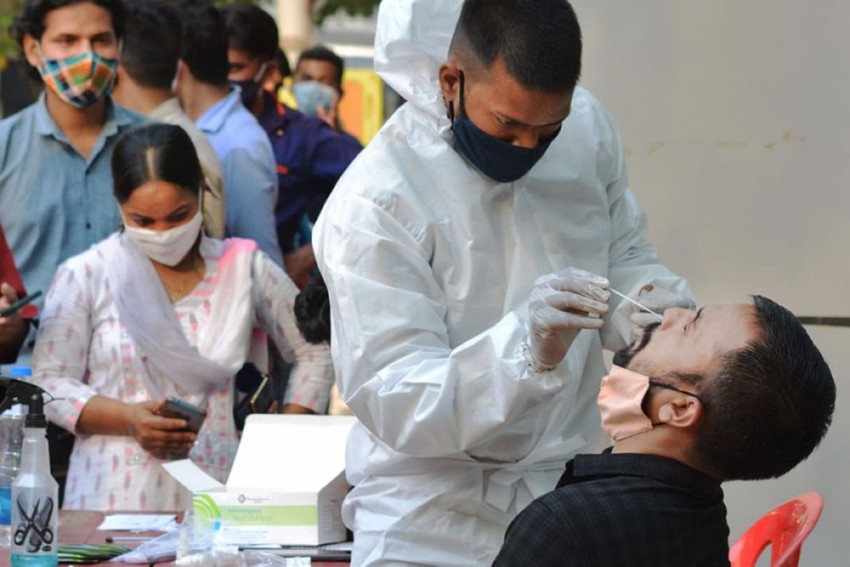 With the country witnessing a massive spike in the number of Covid-19, on Tuesday, the Centre said that an increase in the intensity of the pandemic has led COVID-19 to spread at a faster pace than 2020. The government termed the next four weeks are very critical to control the spread of the virus and stressed on people's participation to control the second wave of the contagion.

The pandemic situation in the country has worsened with a sharp rise in cases and a large part of the population is still susceptible to the virus, said Dr V K Paul, NITI Aayog Member (Health) as he addressed a press conference.

The tools to fight the pandemic remain the same. COVID-appropriate behaviour, containment measures, testing have to be implemented more efficiently, medical infrastructure has to be ramped up and vaccination drive intensified, he said.

With Spurt In Covid-19 Cases, India To Cut Down On Vaccine Export Globally

COVID-appropriate behaviour like wearing masks, staying away from crowds have to be followed in a campaign mode, Paul reminded people.

"The intensity of the pandemic has increased and it is spreading faster than last time. In some states, it (the condition) is worse than others but the upswing (in cases) can be observed across the country," he said.

"People's participation is vital to control the second wave. The next four weeks are going to very critical. The entire country has to come together and make efforts to fight the pandemic."

Paul said the number of coronavirus cases is increasing and along with that mortality is also on the rise. "Still, in terms of the population size and deaths per million we are doing well and the pandemic is in control."

The government has been reiterating that reduced testing, tracking and tracing as well as non-adherence to COVID-appropriate behaviour and large congregations have been the major reasons behind the recent spike in cases.

Detailing the COVID-19 situation in India, Union Health Secretary Rajesh Bhushan said Chhattisgarh's Durg is among the top 10 districts with high active COVID cases while seven are in Maharashtra and one in Karnataka.

Delhi counted as one district, is also in the list, he said.

Given their population, the number of deaths being reported by Punjab and Chhattisgarh is a cause of extreme concern, the Union health secretary said.

The Centre has constituted 50 high-level multi-disciplinary public health teams and deployed them to districts reporting a surge in cases and mortality in Maharashtra, Chhattisgarh and Punjab, Bhushan said.

These teams were being deployed in 30 districts of Maharashtra, 11 of Chhattisgarh and nine of Punjab.

On April 5, more than 43 lakh COVID-19 vaccine doses were administered, the highest single-day coverage till now, taking the total number of jabs given so far to 8,31,10,926, according to the Health Ministry.

India's situation in this context is pretty good. In terms of the pace of ramping up vaccination drive, India has been the fastest, Bhushan said.

Maharashtra, Gujarat and West Bengal were among the states that administered the maximum number of COVID vaccine doses, Bhushan said and emphasised the immunisation drive has to be ramped up in a scientific manner.

Globally, there are 16,783 cases per million population.

"Two positive tests at an interval of at least 102 days with one interim negative test have been defined as SARS-CoV-2 re-infection by Indian scientists and it has been internationally accepted," he said.