Schools have closed, online education is a luxury and in many cases children are pushed into labour and trafficked due to their financial vulnerability 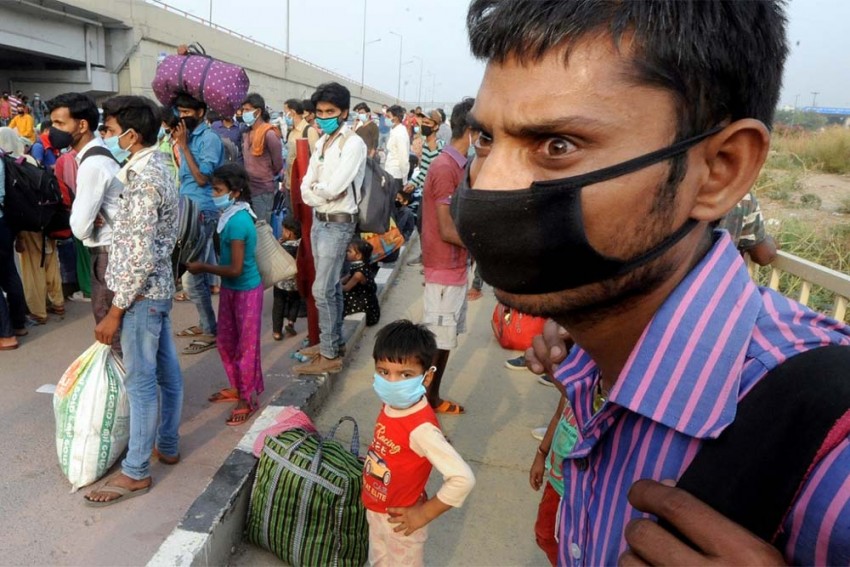 The number of children in debt bondage has grown alarmingly since March 2020, when India went into lockdown, according to activists.

Schools have closed, online education is a luxury and in many cases children are pushed into labour and trafficked due to their financial vulnerability, he said ahead of the World Day Against Trafficking in Persons on July 30, said Deena Nath, a social worker with the NGO Center Direct in Gaya.

"Many of these children's families have taken loans during the lockdown. Now to repay the money, they are being hounded by loan sharks. This is putting further pressure on these children to earn and support their families," he said.

*Mahesh, back home after his rescue, is among the uncounted thousands of children forced to work as labourers and at extreme risk of being trafficked to pay off loans taken by their parents, grandparents and other elders to stave off starvation during the Covid pandemic.

Speaking with the wisdom of one way beyond his years, the 12-year-old wonders if it may have been better had he not been rescued on his way from his Bihar village to a Jaipur bangle factory. The debts were piling up and the work, however difficult, far and exploitative, would have at least put food on the table.

“By working, I could have helped my grandmother and siblings. I feel especially  bad to see my eight-year-old sister and six-year-old brother go hungry....they're too young to understand the financial crunch we are facing," the pre-teen said on phone from  Bilav Nagar village in Bihar’s Gaya district.

*Mahesh’s grandmother *Sushila Devi spells out her trauma. The only surviving adult in her family, she managed to look after her three grandchildren through her work as a daily wage in a brick kiln in Bihar. But the work reduced to a trickle when the pandemic set in and has now stopped completely.

*Sushila Devi, who is her 60s, took a debt of Rs 10,000 to support her family. When even that ran out, she decided to send young *Mahesh  to work in a bangle making factory across the breadth of the country in Rajasthan’s capital Jaipur.

"What could I do? At my age, I cannot travel long distances to work and there is no way to repay the mounting interest on the debt. Every second day, the loan shark comes and threatens me. I had to find a way,” *Sushila Devi told PTI over the phone.

"No one wants their children to stop their studies and start working. I am unable to to feed my family and this seems to be the only feasible option," she said tearfully.

And so it was that *Mahesh was despatched to Jaipur along  with 17 other children from Bilav Nagar. On June 25, they were rescued by police and Center Direct activists. All the children have returned to their homes in Gaya and are surviving on rations provided by civil society organisations.

According to the International Labour Organisation (ILO), child trafficking is about taking children out of their protective environment and preying on their vulnerability for the purpose of exploitation.

Suresh Kumar, Center Direct executive director, said the trafficking system in India is very expansive with informers tipping off child traffickers if they feel an NGO or a law enforcement officer has gotten wind of their activities.

"Another issue we face while carrying out rescue operations is that many children travel with their families and have manipulated documents to show they are adults. To locate these children who are being trafficked is extremely complex," Kumar said.

The rescue is often the tip of the proverbial iceberg. After that, children are usually presented before a welfare committee tasked with rehabilitating them. Children – below 14 - are either sent back to their families or to a childcare institution. In both cases, follow up action is necessary to ensure the child doesn’t slip back into the same desperate situation that made them vulnerable to trafficking.

Giving his perspective, Dhanmait Singh, who works with the NGO Srijan Foundation and is part of the Indian Leadership Forum Against Trafficking, said a lot of children have been trafficked since buses and other public transport began with the lockdown being eased.

The loss of livelihood led to several parents taking the decision to let their children go with relatives in the hope of a better future.

"They are not always aware of the nefarious intentions of relatives who might sell the children once they come away from their parents. There is a dearth of work in our region which is mainly labour intensive, and rations are also proving to be an issue. These are some of the reasons why child trafficking has increased," Singh, who works in Bihar and Jharkhand, told PTI.

He said the loss of livelihoods has occurred on a large scale and people have borrowed from money lenders. This has led to them getting sucked into a vicious cycle of debt bondage.

"Many are unable to pay back as a result of which they are then working for the money lender, their children are being made to work. Many are vulnerable to trafficking as their situation is desperate and to ensure they get by, they are falling prey to the trafficker’s ill intent," Singh said.

Gahan Mahan, 45,  who moved to Haryana from Bihar with his family of six, including two children aged 10 and 12, so he could repay the loan of Rs 10,000 taken during the lockdown at a high monthly interest rate of 10 per cent, is an example of the tightening debt trap.

Mahan, who lived in Belaganj in Bihar, started working in a brick kiln in Haryana's Kaithal district.

"I repaid the loan somehow by taking more debt but I have to pay back the interest to the loan shark. For our work in the brick kiln too we were not paid anything in cash and it was all in the form of rations. We are not sure what to do now," he said, fearing that he might have to put his children to work.

In the first increase in two decades, the number of children in child labour has risen to 160 million worldwide with millions more at risk due to the impact of Covid-19, according to an ILO and Unicef report released last month.

The closure of 1.5 million schools due to the pandemic and lockdowns in India has impacted 247 million children enrolled in elementary and secondary schools and added to the risk of them slipping into child labour and unsafe migration, Unicef said.