The vaccination drive began at the Rajiv Gandhi Super Speciality Hospital around 10 am, officials said. 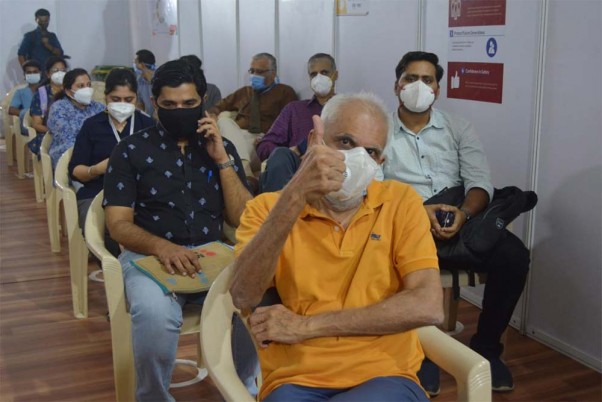 The national capital witnessed the successfull Covid vaccination drive on day two as well. Over 4,300 healthcare workers received the Covid vaccine shots on the opening day and continued the drive on Monday to administer shots to the medical staff at various hospitals.

The vaccination drive began at the Rajiv Gandhi Super Speciality Hospital around 10 am, officials said.

The Covaxin Conundrum: Has India’s Drug Regulator Wrongly Invoked The Emergency Use Law?

Chief Minister Arvind Kejriwal formally kicked off the immunisation drive in Delhi on Saturday at the LNJP Hospital, the state-run facility which offered yeoman service during the pandemic last year.

In Delhi, a total of 4,319 healthcare workers -- 53.3 per cent of those registered -- got the vaccine shots on the first day of the COVID-19 vaccination drive, Delhi Health Minister Satyendar Jain said on Sunday.

Some people did not turn up for coronavirus vaccination at the last moment, he said, adding that the government cannot ask anyone to compulsorily take the jab.

He also said that the number of vaccination centres in Delhi will be increased from 81 to 175 soon.

Jain noted that a similar trend was observed across the country, with around 50 per cent of those registered getting the jabs on the first day.

The vaccine will be administered on four scheduled days of the week -- Monday, Tuesday, Thursday and Saturday. It will not be given on Sunday, and two others days of the week, when other regular vaccination work will be carried out.

So, January 18 is the first working day of the week, since the mega exercise was inaugurated by Prime Minister Narendra Modi across the country.

Oxford Covid-19 vaccine Covishield is being administered at 75 centres, while Bharat Biotech-made Covaxin doses given at the remaining six facilities.

The city government has received in total 2.74 lakh doses of the vaccine so far from the Centre, which would be sufficient to cater to 1.2 lakh healthcare workers, Kejriwal had earlier said.

"Every person will receive two doses, and the Centre has given 10 per cent extra in stock, in case of any mishappening, like damage of vials. There are a total of 2.4 lakh healthcare workers in Delhi who have registered for vaccination, and more doses are expected to arrive soon," he said.

One "severe" and 51 "minor" cases of AEFI (adverse events following immunisation) were reported among health workers who were administered the coronavirus vaccine in Delhi on Saturday, according to official figures.

An AIIMS security guard had developed an allergic reaction after receiving the vaccine. He was kept under observation of doctors, an official had said on Saturday.

"His current status is not known... 51 others were discharged after some time," Jain said.