Bakrid Row: CPI(M) Says No Going Back On Relaxations In Kerala; Rift In IMA 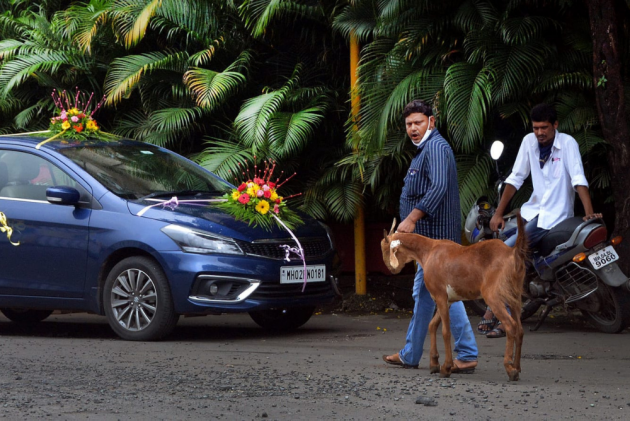 As the Supreme Court on Monday sought an explanation from the Kerala government on the three-day easing of Covid -19 restrictions for Bakrid festival on July 21, a leader of the ruling Communist Party Of India (Marxist) CPI (M) said that there is no question of canceling the relaxations, however, it will abide by the SC order.

The Kerala government announced three-day lockdown restrictions for Bakrid on Sunday, in which shops selling clothes, footwear, jewelry, gift items, home appliances and electronics will be allowed to function.

At present, the state follows a categorized lockdown method based on Test positivity rate (TPR). However, the state is facing pressure from many quarters to reformulate its strategy, which allows shops and business establishments to open only on alternate days. The traders in the state have also threatened to open shops flouting government orders.

The government's decision to lift restrictions ahead of Bakrid is seen as a step to pacify the traders, who are on warpath. However, the issue has snowballed into a political row after Congress spokesperson Abhishek Manu Singhvi described it as a “deplorable act by Kerala government to provide three days relaxations for Bakra eid celebrations especially because it's one of the hotbeds for Covid-19 ‘

He also said ‘if Kanwar Yatra was wrong, so were the relaxations for Bakrid'. However, the Congress state unit refrained from commenting on the matter. Speaking to Outlook, opposition leader V D Satheesan said that the party has decided against commenting on the issue. “The AICC has made it clear that it was Singhvi’s personal opinion. We offer no comments on the issue,” he said. Reacting to Singhvi’s tweet, M A Baby said that it shows his ignorance in the matter.  “Apparently Singhvi is ignorant about what has been permitted by the Kerala government. There are no celebratory processions as part of Bakrid. No relaxation has been given to any demonstrative activity as part of the festival. People need to buy food items and clothes. For Bakrid, additional days have been permitted to make purchases,” says Baby.

It has also sparked another controversy with the Indian Medical Association (IMA) issuing strong warming that it will move Supreme Court if the state does not cancel relaxations. A statement issued by the IMA said, “When many northern states like J&K, Uttar Pradesh and Uttaranchal have stopped, with a constructive sense of public safety the traditional and popular pilgrimage Yatras, it is unfortunate that learned state of Kerala had taken these retrograde decisions,".

However, it turns out that the Kerala chapter of the IMA and the parent body are not on the same page regarding the decision to approach SC on lifting relaxations. On the contrary, the IMA Kerala chapter has been demanding a relook at the lockdown strategy of the state government and was quite critical about it. A week ago, it has issued a strong-worded statement asking the government to allow shops to be opened for more time to reduce the spread.

Dr TS Anish, a member of the state expert committee of Covid- 19 says that the IMA Kerala chapter and its central unit seem to have divergent views on lifting the curbs for Bakrid celebrations. “The Kerala IMA has been demanding to open shops daily and to increase working hours to 12 hours rather than eight. They were saying that super spreading can avoid that way. Now they have gone silent on the Bakrid relaxation,” says Anish, who is an associate professor, community medicine, Trivandrum Medical College.

Another doctor on conditions of anonymity says that the IMA central unit did not hold any discussion with the Kerala chapter on approaching the SC on Bakrid relaxations. He feels that there is a concerted effort by a section at the central level to project Kerala as responsible for the third wave if there’s one. ”The center wants to divert the attention from the shortage of vaccines and their mishandling of the second wave of the pandemic,” he says.

Dr Sulphi Noohu, state president-elect of Kerala IMA told Outlook that during the relaxation period, the government has to ensure that the crowd adheres to Covid protocol.

“We didn’t raise any particular demand for Bakrid. However, for a long time, we have been asking the government to allow shops to open daily and increase the working hours. If they allow shops to open only a few days, it will attract a crowd. I don’t think there’s any point in moving the court regarding the Bakrid relaxations”.  He also points out that the government has already laid down certain norms for the trade bodies during the three days. “They have to ensure that the salespersons have got at least one dose of vaccine and make sure that customers stick to the physical distance rules. If there is overcrowding, then it will be a disaster,” he adds.

The debate should be more on increasing the vaccination than Covid relaxations, he says.

Dr A. Althaf, Convenor, Kerala IMA epidemic control cell, says that the Kerala chapter has demanded to increase the working hours of business establishments. “Crowding is bad news for curbing the spread, especially festivals. If rules are strictly enforced during these three days, we can avoid the spread. Kerala has shown the way for the world in controlling the virus in many ways,” says Althaf.

Dr Anish says that short-duration relaxations can work as a trial run to monitor the trajectory of the virus in the coming days. He also says that this step will come as a relief for local businesses, which are battered by the pandemic. “I agree that that the relaxation may lead to a rise in Covid numbers. But it will give some sort of relief to the local economy. It’s only for three days and we can consider it as a pilot testing to see how the virus behaves after easing the restrictions a bit. We assume that the herd immunity may have grown into 50-60 percent due to vaccination and a large number of the infected population in the second wave. A seroprevalence survey can give us a better idea,” he says.

Though the lifting of restrictions came as a breather for the traders, the community is anguished by the adverse response from some political parties and IMA.

G Karthikeyan, President Kerala Merchants chamber of Commerce (KMCC) says that the campaigns against Bakrid relaxations seem to be politically motivated. “We only care about our livelihood and certain sections are trying to communalize it. When beverage shops opened, there were no concerns like this. We have been requesting the government to allow us to open shops daily for a long time,” he says, adding that if the Supreme Court orders to cancel relaxation, they will obey the order.

“We have always adhered to Covid protocols. If the SC decides to cancel the relaxations, we will obey it. Either Corona or hunger will kill us,” he says.