Cracking The Sidhu Cipher: Can The Gandhis Keep Sherry On Top? 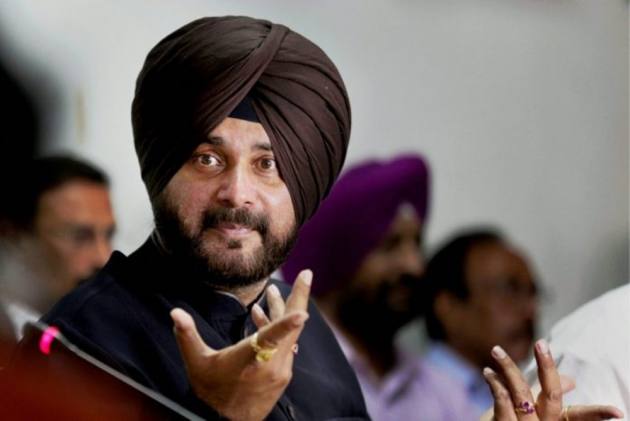 After sending his party scrambling to resolve the ongoing power tussle between him and Punjab chief minister Captain Amarinder Singh, Congress MLA Navjot Singh Sidhu has been uncharacteristically silent for over a fortnight. Sidhu’s last public appearance was when he was in Delhi on June 1 to meet a three-member Congress panel, constituted by interim party chief Sonia Gandhi to resolve the ongoing factional feuds in the party’s Punjab unit. Since then, the voluble Sidhu has neither made a public appearance nor followed his schedule of posting daily tweets chastising the Punjab chief minister.

The three-member panel comprising Congress leaders Mallikarjun Kharge, Harish Rawat, and JP Aggarwal submitted its report to Gandhi earlier this week after speaking to nearly 150 party members from Punjab. The panel had suggested a slew of reconciliatory measures to end the feud in Punjab between Singh and a section of party leaders, Sidhu being just one of over a dozen. The rollout of the correctives, say sources, has been delayed primarily because the Congress leadership still has no clue about what will appease Sidhu.

The loquacious cricketer-turned-politician, who has been on the warpath against Singh for over a year, say party sources, has refused to settle for anything less than the state party president’s post. Sidhu, say sources, “rejected all other options” and refused to have any further discussions with party colleagues, making it clear to them that he will now speak only to the high command – Sonia Gandhi, former party chief Rahul Gandhi and Congress general secretary Priyanka Gandhi Vadra.

The Gandhi trio is now trying to crack the big Sidhu cipher – what will pacify him without triggering other mutinies within the Punjab Congress and undermining the authority of Amarinder Singh. Senior Congress leaders involved with the Punjab crisis-resolution effort tell Outlook that assuaging the mercurial Sidhu is a prerequisite for any lasting truce in the state Congress as any offer made to him will also determine the contours of what the party can offer other disgruntled leaders.

A senior party leader who was not a member of the Kharge-led panel but actively aided the crisis-resolution effort tells Outlook, “major changes need to be made both in Punjab Congress and our government to ensure that we win the assembly polls next year but, in more ways than one, these changes can be made only after the leadership solves the question of what it can do with Sidhu.” The leader says Sidhu has, so far, rebuffed the offer of being made deputy CM on grounds that he has no working relationship with the CM. Singh, say sources, had grudgingly agreed to offer Sidhu the deputy CM’s post on the condition that it will also be shared by another leader. Sidhu maintains that Singh will only make things more difficult for him if he joins the cabinet.

Sidhu’s fears are not unfounded. The history of Congress governments in which deputy CMs were appointed primarily to pacify garrulous leaders who couldn’t make it to the CM’s chair is full of instances wherein the ostensible balancing act threw the party off-balance. The Ashok Gehlot-Sachin Pilot saga that unfolded in Rajasthan last year and has now sent the Congress leadership in a renascent tizzy is an immediate reminder. In Punjab, the feud between Amarinder Singh and his then deputy, Rajinder Kaur Bhattal, during the former’s earlier chief ministerial stint in 2004 is another such instance.

A member of the Kharge-led panel tells Outlook that the Gandhis cannot roll out the Punjab peace plan without having Sidhu on board. “A new PCC president has to be appointed in Punjab. Sidhu cannot hold this post because the party can’t have a Jat Sikh CM and a Jat Sikh PCC chief. Besides, even among the faction that is unhappy with Amarinder and (present) PCC chief Sunil Jakhar, Sidhu is not acceptable as PCC chief. Sidhu will have to accept something else,” the leader said.

Another party veteran explained that appointing Sidhu as the deputy CM has other implications. With Singh making it clear that Sidhu won’t be the only deputy CM, the party veteran explains, “we have to consider the caste and community arithmetic in Punjab… if the second deputy CM is a Hindu OBC, then the PCC chief will have to be a Dalit Hindu or an upper-caste Hindu. Similarly, if the second deputy is a Dalit, then the PCC chief will have to be an OBC or upper-caste Hindu. We can’t proceed on one front and leave the other open-ended because the assembly elections are less than a year away.”

A former Union minister who has been speaking to different factions of the Punjab Congress tells Outlook that the “only workable solution” at the moment is for Sidhu to accept Singh’s leadership as the CM and settle for deputy chief ministership and/or chief of the party’s campaign committee for next year’s poll. “This is the best that can be offered to Sidhu. Singh will not be replaced as CM and he will be the face of the party in next year’s polls too. Sidhu is not an insignificant political face in Punjab and he does draw people to the party but he needs to understand the larger picture too.”

The Gandhis have to pull off a tough balancing act. This is where another curious hurdle comes in. A section of party leaders wonders whether the Gandhis can rely on Sidhu, who has repeatedly avowed his undying loyalty to the high command, to accept their olive branch. This faction of Congress leaders believes that Sidhu’s rebellion is only a ruse to justify his imminent exit from the party, four and a half years after he had joined it by quitting the BJP.

There have been recurring rumours within the Punjab Congress that Sidhu, along with a handful of other party leaders, has been in regular touch with Arvind Kejriwal’s Aam Aadmi Party (AAP), which has successfully positioned itself as a key Opposition party in the state over the past seven years. Sources say that a section of AAP leaders have assured Sidhu that he could be the party’s CM face in the polls. The ongoing farmer protests have constricted the BJP’s political space in Punjab while the Congress’s main rival, the Shiromani Akali Dal (SAD), has been atrophying. The AAP, despite continuing desertions to the Congress, believes that a charismatic Jat Sikh leader like Sidhu can displace the SAD as the main alternative to the Congress.

Those who believe Sidhu is flirting with AAP allege that he has been trying to build up his image as a leader who can “simultaneously take on heavyweights like Amarinder Singh and the Badals of SAD in the interest of Punjab, Punjabis, and Punjabiyat”. Sources close to the former cricketer, however, tell Outlook that these rumours are being spread to malign Sidhu and spoil his rapport with Rahul and Priyanka, both of whom have become cautious of colleagues who hanker for posts and power. Sidhu’s aides also offer another interesting argument to reject the rumours – “both Kejriwal and Sidhu prefer that the spotlight is always on them… if Sidhu goes to AAP, he will eventually have the same problems with Kejriwal that he is currently having with Amarinder”.

Congress leaders agree that Sidhu’s animus with Singh is already at a stage where any peace offering by the Gandhis will bear no lasting result. Instead, it might end up confusing the party cadres and voters in Punjab during the assembly polls next year while also triggering further heartburn among other anti-Singh leaders of the party. However, the party also realizes that Singh will turn 80 years old next year and the party will soon need a popular Jat Sikh face to replace him in Punjab. Sidhu knows this too. But, can he stay on in the party till Singh is eased out? More importantly, can the Gandhis convince him that Sherry will be on the top, eventually?