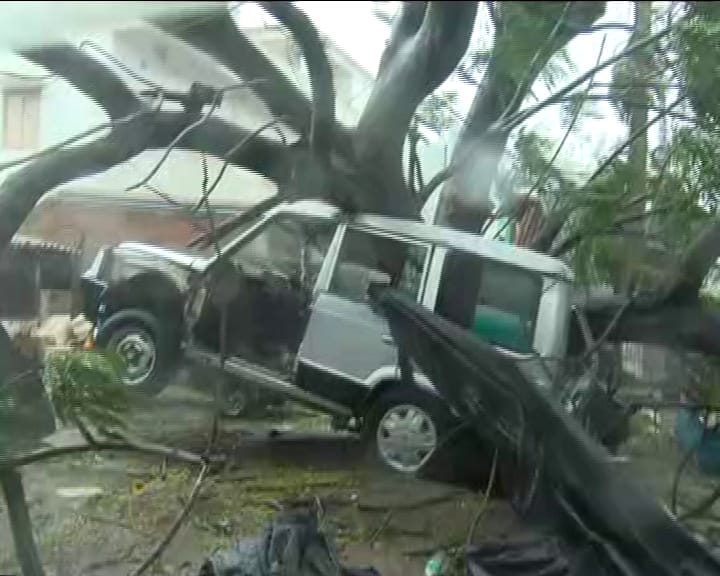 Cyclone Fani made landfall in Puri on Odisha coast around 8 am, triggering heavy rainfall coupled with high-velocity winds with speed of 175 kmph in vast areas.

Large areas in the seaside pilgrim town of Puri and other places were submerged with water as heavy rains battered the entire coastal belt of the state.

Several trees were uprooted and thatched structures destroyed at some places including Bhubaneswar.

8:00 pm: The Meghalaya government has sought deployment of a platoon of the National Disaster Response Force (NDRF) in the state in view of Cyclone Fani, officials said Friday.

The IMD has warned of thundersquall accompanied with gusty winds and heavy rains for the next 48 hours across the northeastern states, including Meghalaya.

7:30 pm:  Bangladesh on Friday evacuated over five lakh people from its southwestern districts as cyclonic storm 'Fani', brewing over the Bay of Bengal, is drawing closer and is likely to hit the country late night and cause severe damage after ravaging the Indian coastlines.

7:00 pm:  As per telephonic information, in Puri, there is extensive damage to kuchha houses, old buildings and temporary shops. However, there are no confirmed report of deaths, but 160 people have been reportedly injured. Power and telecom is completely down. NDRF and State forces are clearing roads, a spokesperson of the Central government said.

3:15 pm: Cyclone Fani will alter the weather conditions in Nepal and bring heavy rainfall and snowfall in the Himalayas, meteorologists warned.

Video clip of a roof being blown off at the undergraduate hostel in AIIMS Bhubaneshwar due to #CycloneFani #Fani #FaniCyclone #FaniUpdates pic.twitter.com/97c5ELQJ46

2:30 pm: This is how it looks now at All India Institute of Medical Sciences in Bhubaneshwar.

This is how it looks now at All India Institute of Medical Sciences in #Bhubaneshwar #CycloneFani #Odisha #FaniUpdates @Outlookindia pic.twitter.com/SEio4nCSjH

2:04 pm: Model code of conduct, in place for Lok Sabha elections, has been relaxed in four Andhra Pradesh districts -- East Godavari, Visakapatnam, Vizianagram and Srikakulam -- in view of relief work required due to the destruction caused by cyclone Fani.

1:45 pm:  "I took the latest update from officers. I held a review meeting y'day. More than Rs 1000 cr was release to concerned governments y'day in advance. NDRF, Indian Coast Guard, Army, Navy, Air Force are working with the admin. I assure the affected people that nation & centre are with them," says PM Modi.

#BREAKING Cyclone Fani, one of the biggest storms to come off the Indian Ocean in recent years, has slammed into India killing two people and cutting off power and water pic.twitter.com/sXJuKExHzF

11:45 am: A special train to be run from Visakhapatnam to Mumbai CSTM with the timings and stoppages of Konark Express.

11:39 am: A baby born this morning in Bhubaneshwar named Fani.

11:21 am: BJP leader Sambit Patra on Friday took to Twitter and prayed for the well being of people of the affected region.

11:12 am: A 65-year-old woman died at a cyclone shelter in Devendranarayanpur under Rajnagar block of Kendrapara.

10:58 am: West Bengal CM Mamata Banerjee to stay in Kharagpur, near the coastal belt and monitor the situation herself, today and tomorrow. All her political campaigns for the two days have been cancelled.

10:49 am: Large areas in the seaside pilgrim town of Puri and other places were submerged with water as heavy rains battered the entire coastal belt of the state.

10:42 am: The Indian Railways will run a special train from Visakhapatnam to Mumbai today to clear the stranded passengers affected by cyclone Fani.

10: 30 am: After landfall, the cyclone is very likely to move north-northeastwards, weaken gradually and emerge into Gangetic West Bengal as a severe cyclonic storm and move to Bangladesh after weakening.

10:15 am: Winds in Puri, Odisha are blowing at a maximum speed of 240-245 km per hour and heavy to very heavy rains are continuing over the Odisha coast. After landfall, the impact is likely to reduce and it is likely to move towards West Bengal coast, says IMD Hyderabad.

9:54 am: Cooked food is being served to people who have taken shelter in cyclone shelters. About 5000 kitchens have started operating. A record 10.85 lakh people have been evacuated with priority to the physically challenged, women and children, according to State government officials.

9:36 am: Cyclone Fani landfall process started at 8 am, says IMD

The landfall process of extremely severe Cyclone Fani -- also pronounced FONI -- started at 8 am close to Puri in Odisha, with the area recording a wind speed of around 185 kilometres per hour, the IMD said. The process of landfall is expected to continue for the next two hours, it added.

8:52 am: Visuals from coastal town of Digha in West Bengal.

#WATCH Visuals from coastal town of Digha in West Bengal as #CycloneFani is expected to make landfall in Odisha's Puri district by 11 am. According to the Met Dept, the impact of landfall process has begun. pic.twitter.com/R5iJY4vjGD

ESCS FANI about 40 km south-southwest of Puri at 0730 IST. To cross Odisha coast between Gopalpur & Chandbali around Puri during forenoon of tomorrow, the 3rd May. PURI reported maximum sustained wind speed of 142 kmph gusting to 174 kmph 0730 IST. Landfall impact has started. pic.twitter.com/7MRfkOJPPj

8:40 am: More than 11 lakh people have been evacuated from the vulnerable districts in last 24 hrs, Chief Minister Naveen Patnaik's office said.

THE EXTREMELY SEVERE CYCLONIC STORM “FANI” LAY CENTERED AT 0130 HOURS IST OF TODAY, 03rd MAY, 2019 NEAR LAT. 18.520N AND LONG. 85.150E OVER WESTCENTRAL & ADJOINING NORTHWEST BAY OF BENGAL ABOUT 160 KM SOUTH-SOUTHWEST OF PURI AND 215 KM EAST-NORTHEAST OF VISAKHAPATNAM. pic.twitter.com/qRPh6kxXMm

1 am: The Indian Coast Guard has positioned 34 disaster relief teams at different spots and deployed four ships to handle any exigency.

11:15 pm: The Navy and the coast guard have deployed ships and helicopters for relief operations.

10 pm: As Cyclone Fani moves closer to the east coast, the West Bengal government on Thursday sounded alert in several coastal districts and the state capital Kolkata, asking the public to leave seaside destinations and directing fishermen to not venture into the sea.

9:45pm: Schools have been ordered closed and people asked to move to safer places as the extremely severe cyclonic storm makes the landfall in Puri in Odisha Friday morning.

9:30 pm: Prime Minister Narendra Modi held a high level meeting to review the preparedness of state and central Ministries/agencies concerned to deal with the situation arising out of cyclone Fani.