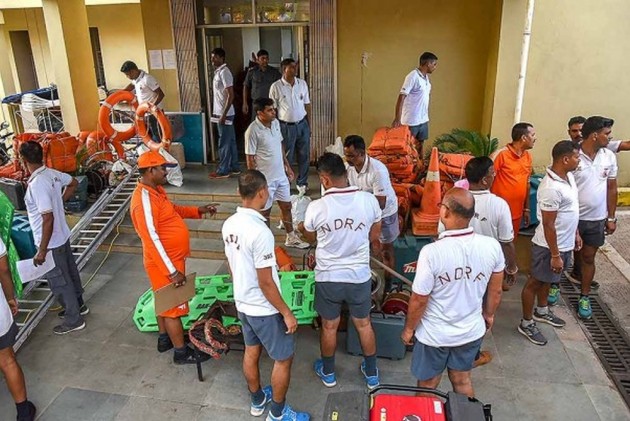 A massive operation was launched in Odisha Thursday to evacuate over eight lakh people from low-lying coastal areas as the extremely severe cyclonic storm 'Fani' moved closer to the eastern coast, officials said.

Cyclone Fani To Gaja: Here's How Tropical Storms Get Their Names

Cyclone Fani: Over 8 Lakh People To Be Evacuated In Odisha, Defence Forces On Standby

Directorate General of Civil Aviation in a release has said that no flight will depart or arrive at Kolkata airport between 9.30 pm of May 3 and 6 pm of May 4 due to cyclone Fani. The cyclone is expected to enter West Bengal on May 3 midnight or May 4 early morning as a Severe Cyclonic Storm. Heavy rainfall is expected on May 3 and 4. The West Bengal government has ordered against fishing and sea bound activities in coastal areas since May 2.

5:18 pm: Over 4,000 specialised personnel as part of 81 NDRF teams have been deployed to deal with the 'extremely severe' cyclone 'Fani' in Odisha, Andhra Pradesh and West Bengal which are feared to be affected while another 31 teams have been kept on standby.

5:10 pm: The Odisha Police have moved a staggering 1,87,000 people living close to the coast and in kutcha houses to the marked safe zones and shelter homes.

Pregnant women are being given special care during the evacuation process.

We are fully determined to get everyone to safety! Visuals of pregnant women being carefully moved to the safe zone. #CycloneFani #OdishaPrepared4Fani pic.twitter.com/3x9cSgIoAe

As per the instructions of @DGPOdisha Evacuation process in vulnerable areas is in full swing. A whopping 1,87,000 people living close to the coast and in kutcha houses in Ganjam dist have been moved to the marked safe zones and cyclone shelters #CycloneFani #OdishaPrepared4Fani pic.twitter.com/69AjLTmtrJ

4:50 pm: Around 89 trains have been cancelled in the last two days in view of the 'extremely severe' cyclonic storm 'Fani', which is likely to affect Odisha, Andhra Pradesh and West Bengal, while three special trains have been put into service to ferry stranded passengers from affected areas, the Railways said today.

The national transporter said it will refund passengers for the cancelled or diverted trains if tickets are produced for cancellation within three days from the scheduled date of journey.

The Railways had cancelled 81 trains on Wednesday.

4:35 pm: Preparations are in full swing at Red Cross Bhavan in Bhubaneshwar for the distribution of relief material.

1:00 pm: The Puri district administration has begun evacuating tourists in special buses of the Odisha State Road Transport Corporation (OSRTC) since Thursday morning. A total of 10 buses will be pushed into service.

12:45 pm: The Nilachakra Bana (flag) atop Puri Srimandir snapped off due to strong winds on Thursday. The Shree Jagannath Temple Administration (SJTA) had instructed on Tuesday to tie only one short flag to the Nilachakra atop the shrine from May 1 to 5 to ensure there is no interruption in the rituals at the temple. Another flag of the same length will be tied firmly around its rim.

12: 15 pm:  Sand artist Sudarsan Pattnaik urged people of Odisha to stay safe and not panic as the state readies to face Cyclone Fani

Appeal to all Don’t Panic! Stay safe and help each other during #CycloneFani . my sand art at #Puri beach in #Odisha . pic.twitter.com/2QWQV9iFMa 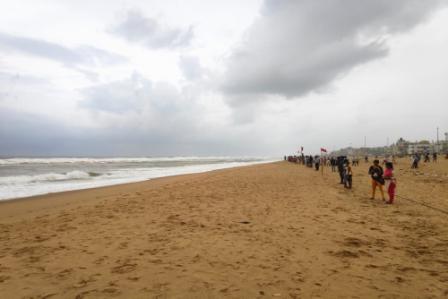 11:00 am: Cyclone Fani is likely to move north-northeastwards and cross the Odisha coast near Puri on May 3 evening with maximum sustained wind speed of 170-180 kmph and gusting up to 200 kmph, Special Relief Commissioner (SRC) B P Sethi said.

10:00 am: Navy, Air Force, Army and Coast Guard have been put on high alert to meet any eventuality. Personnel of National Disaster Response Force (NDRF), Odisha Disaster Rapid Action Force (ODRAF) and fire service have been sent to vulnerable
areas to assist the administration, an official said.

#CycloneFanu #IndianNavy ships Sahyadri, Ranvir & Kadmatt with HADR stores onboard will be following the Cyclone keeping South of the 'Eye of Storm' and remain standby to be the 'First responder at place of Cyclone crossing coast @SpokespersonMoD @DefenceMinIndia @nsitharaman pic.twitter.com/aG6lbsRD6X