With cyclone Nisarga expected to make landfall south of Mumbai on June 3, several teams of National Disaster Response Force have been deployed at various places in Maharashtra. 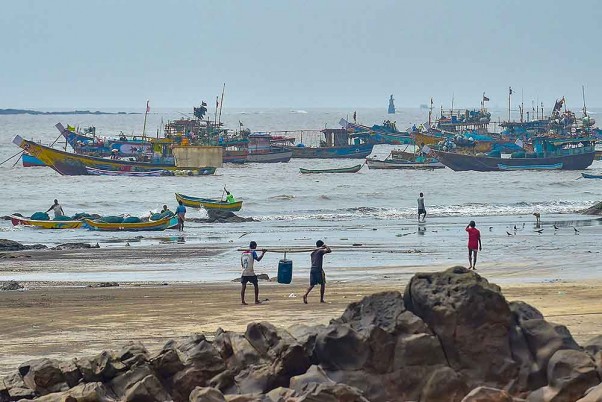 Fishing boats anchored at the shore following a warning by Indian Meteorological Department (IMD) for the fishermen to not enter the Arabian Sea for the next two days as a precaution against cyclone 'Nisarga', at Uttan beach in Thane.
PTI Photo
Outlook Web Bureau June 02, 2020 00:00 IST Nisarga Likely To Intensify Into 'Severe Cyclonic Storm', Make Landfall Near Mumbai Tomorrow

A week after a raging cyclone wreaked havoc in West Bengal, the country is now bracing to face another cyclone which is headed towards the coastline of Maharashtra and Gujarat.

With cyclone Nisarga expected to make landfall south of Mumbai on June 3, several teams of National Disaster Response Force (NDRF) have been deployed at various places of the state.

India Meteorological Department (IMD) on Tuesday said that Nisarga, which is heading towards Gujarat and Maharashtra, is likely to intensify into a "severe cyclonic storm" in the next 24 hours and is expected to make landfall close to Mumbai tomorrow.

Cyclone Nisarga currently lies as a depression 490 km from Mumbai, 280 km from Goa's capital city and 710 km from Surat district in Gujarat. It is now slated to further turn into a cyclonic storm in 12 hours and then into a severe cyclonic storm in subsequent 12 hours.

IMD  has said that the depression intensified into a deep depression at 5:30 a.m. on Tuesday.

Thirty-three NDRF teams have been deployed in the coastal districts of Maharashtra and Gujarat in view of the impending Cyclone Nisarga, the chief of the federal contingency force said on Tuesday.

Two NDRF teams have been deployed in Palghar, three teams in Mumbai. one in Thane, 2 teams in Raigad and one team in Ratnagiri in Maharashtra.

The administration of these districts has been asked by the state government to shift all the people along the shoreline to relief centres.

Low pressure, depression and deep depression are the first three levels used by the IMD to classify cyclones based on their intensity.

It is likely to cross north Maharashtra and south Gujarat coasts between Harihareshwar town in Raigad district and Daman as a severe cyclonic storm on Wednesday.

IMD's Director General Mrutyunjay Mohapatra has said that the severe cyclonic storm will have a wind speed of 90-105 kmph when it crosses the coast on June 3.

According to Roxy Mathew Koll, a climate scientist at the Indian Institute of Tropical Meteorology, it will be the first-ever cyclone in recorded history to hit the Maharashtra coast in June.

Whereas, as per another researcher at the same institute, 'Nisarga' will be only the second cyclone in recorded history that will be hitting the Maharashtra coast in the pre-monsoon season i.e. April-June.

"The one and only cyclone in the past that hit Maharashtra coast in the pre-monsoon season was May 1961 cyclone," Vineet Kumar said.

The IMD Director General also said that the cyclonic storm will affect the coastal districts of Maharashtra, including Mumbai, more than Gujarat and neighbouring states.

"As per our predictions, Maharashtra coastal districts like Sindhudurg, Ratnagiri, Thane, Raigad, Mumbai and Palgarh will be more affected by it."

The Central Water Commission has sounded flood alert for Sindhudurg, Ratnagiri, Thane, Mumbai, Palgarh and Nasik districts of Maharashtra, Daman district of union territory of Daman and Dui, Silvassa district of Dadar and Nagar Haveli and Valsad district of Gujarat.

There could be inundation in low lying areas, townships, and city areas. Wind speed could also cause damage to trees, telephone, and electric poles, Mohapatra warned.

Due to its influence, the east central Arabian Sea and south east Arabian Sea is currently rough. Fishermen were advised not to venture into the sea till Thursday near Kerala, Lakshadweep, coastal Karnataka, Goa, Maharashtra, and Gujarat.

New Study Shows How Hydroxychloroquine May Cause Heartbeat Disturbances