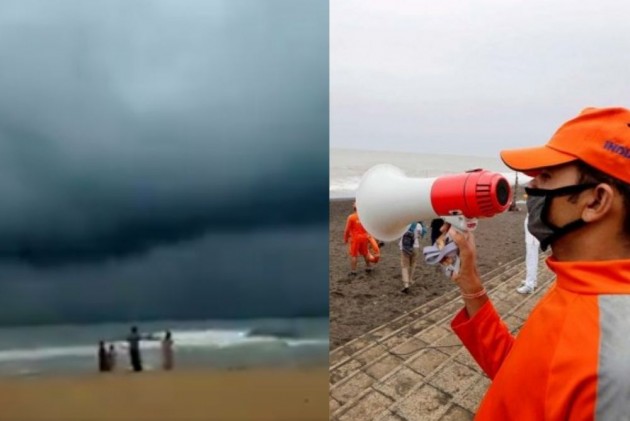 Nearly 1,200 National Disaster Response Force (NDRF) rescue personnel have been deployed in Tamil Nadu, Andhra Pradesh and Puducherry and 800 others are on standby in view of cyclone Nivar, the "very severe cyclonic storm" which is expected to make landfall Wednesday evening.

NDRF chief S N Pradhan also said they are prepared for a "high level of intensity and the worst form" of the cyclonic storm as it surges from the Bay of Bengal towards the southern coastline.

"We are keeping a close watch on the development and we are coordinating with the affected states,"he told a press conference here.

"It is a rapidly developing situation and it could take the shape of a very severe cyclonic storm that has a speed of about 120-130 km per hour."

Pradhan said a total of 50 NDRF teams has been earmarked for combating any situation emerging out of the cyclone that is expected to make landfall late Wednesday evening.

A total of 22 teams have been pre-deployed while eight are on standby in the two affected states of Tamil Nadu and Andhra Pradesh, and in the Union Territory of Puducherry, Pradhan said.

"Out of these 30 teams, 12 are deployed in Tamil Nadu, seven in Andhra Pradesh and three in Puducherry", he said.

An additional 20 teams will be on standby to be airlifted from locations such as Cuttack (Odisha), Vijaywada (Andhra Pradesh) and Thrissur (Kerala), he said.

The NDRF chief said the teams are equipped with all communication gadgets, pole and tree-cutters and the personnel have been provided with personal protection kits in view of the COVID-19 situation.

"Our teams will continue to be deployed in the affected areas as long as they are required and they will ensure that situations like heavy rainfall, flooding and waterlogging that follow a cyclonic storm are tackled effectively", he said.