As per a government release, the state administration shifted over one lakh people living in coastal areas of 17 districts to safer places till late Sunday night, and the work resumed on Monday morning. 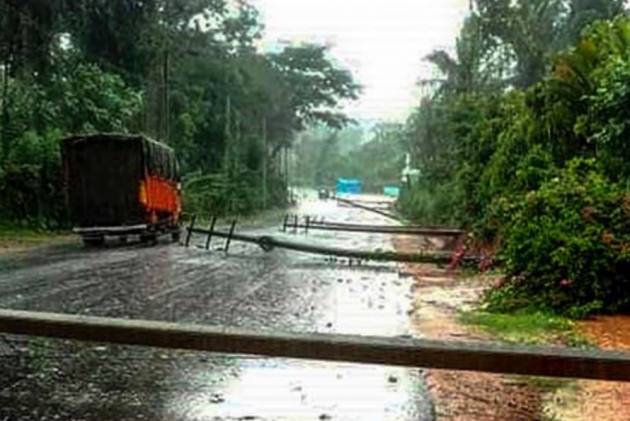 The India Meteorological Department (IMD) on Monday said, Cyclone Tauktae, which has now intensified into an "extremely severe cyclonic storm", is likely to reach Gujarat coast and cross the state coast between 8 pm and 11 pm,

As per a government release, the state administration shifted over one lakh people living in coastal areas of 17 districts to safer places till late Sunday night, and the work resumed on Monday morning.

According to the State Emergency Operation Centre, in the 24-hour period ending at 6 am on Monday, 84 talukas of 21 districts of Gujarat received light rainfall, mainly caused due to the cyclonic disturbances.

Six talukas received over one inch rainfall, it said.

As per the latest bulletin of the India Meteorological Department (IMD), cyclone Tauktae has further intensified into an "extremely severe cyclonic storm".

"It is very likely to move north-north-westwards and reach the Gujarat coast in the evening hours of (May) 17th and cross the state coast between Porbandar and Mahuva (Bhavnagar district) during the night (2000 hrs-2300 hrs IST) with a maximum sustained wind speed of 155-165 kmph gusting to 185 kmph," the IMD said.

The cyclone will cause light to moderate rainfall at many places in the state, heavy to very heavy showers at a few places, and extremely heavy downpour at isolated places over southern districts of Saurashtra, Diu and Gujarat region on Monday and Tuesday, the IMD said.

The sea conditions will remain "phenomenal" till Tuesday morning before improving, it said.

The state government in a release said over one lakh people were shifted to safer temporary shelters from 655 vulnerable villages in 17 districts till late Monday night.

A number of teams of departments like forest, roads and buildings, health, revenue and electricity have been deployed to immediately address the damage caused due to the cyclone, it said.

Special arrangements have been made in hospitals treating COVID-19 patients to ensure electricity backup in case of power outage due to the cyclone.

Arrangements have also been made for 161 ICU ambulances and 576 ambulances of '108' service to shift patients in case of emergency, it said.

The state government has also created 35 green corridors for easy transportation of medical oxygen for the needy patients across Gujarat.

De-watering pumps have also been set up in low-lying areas to clear flooding.

Local administrations have removed 2,126 hoardings in urban areas and 643 in rural areas as well as 668 temporary structures, to avoid any threat caused by them to people's lives, the government said.