The minimum temperature in Delhi on Monday was recorded at 3.2 degrees Celcius, five notches below normal and the lowest this season so far. The cold wave is likely to continue till Wednesday, as per IMD. 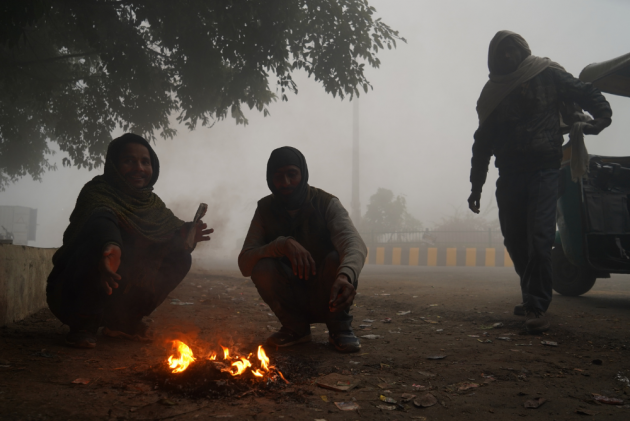 Following the cold wave, that has gripped several states across North India on Monday, the weather is likely to remain chill with freezing temperatures.  According to the Indian Meteorological Department (IMD), severe cold wave conditions will prevail in northwest India till December 21.

A cold wave is also predicted in parts of Chhattisgarh and Odisha till Thursday afternoon.

Dense fog is predicted in the morning hours in parts of Punjab and Haryana from December 23 to December 25 and over western Rajasthan on December 24 and 25.

Intense cold conditions continued to paralyse normal life in Rajasthan where the mercury dipped below freezing point at four places on Sunday night. The night temperature was - 1.8 degrees celsius in Fatehpur (Sikar), - 0.5 in Sikar and Churu, and -0.1 degrees in Karauli.

Chief Minister Ashok Gehlot on Monday tweeted about taking measures to save crops from frost.

The cold conditions are expected to remain the same during the next 24 hours, according to several reports.

Rajasthan: Churu recorded a minimum temperature of -1.1 degrees Celsius today, on 18th Dec, as per IMD. People in the region woke up to dense fog this morning, pic.twitter.com/fbYPKC40hy

A cold wave swept parts of Delhi on Monday causing the minimum temperature at the Safdarjung Observatory, considered the official marker for the capital, to drop to 3.2 degrees Celsius, five notches below normal and the lowest this season so far.

Two back-to-back western disturbances and the resultant slowing down of cold northwesterly winds from Tuesday night will push the minimum temperature up, said RK Jenmani, a senior scientist of IMD. The automatic weather station at Jaffarpur village in west Delhi recorded a low of 2.9 degrees Celsius, six notches below normal.

Finding the homeless shivering in the biting cold on the streets, staff of South district #DelhiPolice and NGO volunteers wrapped them in blankets. @DCPSouthDelhi pic.twitter.com/yIVOwQCYWp

Residents of Kashmir woke up to frozen water bodies and taps on Monday as the valley remained in the grip of a severe cold wave. The minimum temperature settled several degrees below the freezing point, according to officials.  The fringes in the interior of famous Dal Lake have also frozen while city residents were facing problems due to frozen drinking water pipes.

Kashmir has been reeling under sub-zero temperatures, with the local MeT Department predicting that the respite from the persistent cold wave is likely on Christmas with light to moderate snowfall expected.

Kashmir is also bracing up for 40 days of the harshest winter period starting tomorrow. The 40 day period will start with the  'Chilai Kalan'--a period where maximum snowfall and rains are expected. It is followed by 'Chilai Kurd' and 'Chil Bacha'. The harshest 40 period will conclude on January 31.

A boy shows a piece of frozen ice in the interiors of Dal Lake in Srinagar pic.twitter.com/Le3QYt8Pkr

The Met department has issued three orange alerts warning of cold to severe cold waves and cold days in Madhya Pradesh where minimum temperatures dipped due to chilly wind from north India.

One of the three orange alerts issued warns of the ground frost accumulation. The first alert predicted a likely severe cold wave at isolated places and a cold wave at many places in the ten divisions of MP- Bhopal, Indore, Jabalpur, Gwalior, Chambal, Ujjain, Rewa, Shahdol, Hoshangabad and Sagar, in the next two days. In the second alert, IMD said that 17 districts, including Indore, Jabalpur, Rewa, Satna and Mandla, are likely to witness either a "severe cold day" or a "cold day" in the next two days.

Kolkata shivered on Monday as the mercury plummeted to 11.2 degrees Celsius, while Darjeeling recorded the lowest temperature in West Bengal at 3.5 degrees Celsius.

The weather office said that low day and night temperatures will continue for another couple of days, following which there will be a slight thaw.

Residents of Nagpur on Monday woke up to the coldest morning of the present winter season, with a minimum temperature of 7.8 degrees Celsius, the lowest in the Vidarbha region, The IMD has issued a cold wave warning for the Vidarbha region on Monday and Tuesday.  The minimum temperature will remain around the same for the next three days, and there is a possibility of the mercury rising after December 23. Besides Nagpur, various other places in Maharashtra's Vidarbha region have also been witnessing cold conditions.

Punjab and Haryana were in the grip of a severe cold wave on Monday, with Hisar recording a minimum temperature of 0.2 degrees Celsius. According to the Meteorological Department, the night temperature continued to hover well below the season's normal at most places in the two states. In Haryana, Hisar was the coldest place recording eight notches below normal minimum temperature.