‘Dangerous’ Jurisdiction When Judges Act In Their Own Cause: Prashant Bhushan

Prashant Bhushan said that scandalising the court or lowering the authority of the court is the problematic part of the contempt case as that is directly in conflict with freedom of speech. 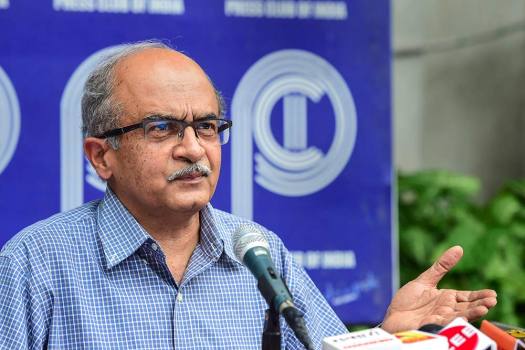 Advocate and rights activists Prashant Bhushan has said that the contempt case against him not only shone light on the Act but also on the issue of freedom of speech and the role of the Supreme Court.

“I am glad the contempt case against me has brought focus on not just contempt, but also on the issue of freedom of speech and the role of the Supreme Court in five years,” said Bhushan while addressing a webinar on "Freedom of Speech and the Indian Judiciary” said on September 3.

The webinar was organised by the Foreign Correspondents’ Club of South Asia. Bhushan further said that “scandalising the court or lowering the authority of the court is the problematic part of the contempt case as that is directly in conflict with freedom of speech."

"It is a vague and undefined jurisdiction; it is left to every judge to decide. Any criticism of the court could be interpreted as lowering the authority of the court…It is an unreasonable restriction on the freedom of speech,” declared Bhushan. “In this jurisdiction, the judge acts as the accuser, the prosecutor and the judge. It’s a dangerous jurisdiction where judges act on their own case.”

The Supreme Court on August 14 had held Bhushan guilty for contempt and imposed a token fine of Re 1 for his tweets criticising the judiciary. It asked him to deposit the amount by September 15, failing which he would attract a jail term of three months and debarment from law practice for three years. Bhushan had responded that he would pay the fine, but would also file a review petition against the order.

Another panelist, author and activist Arundhati Roy, described the right to free speech as a “fundamental building block of democracy”. She talked of the importance of speaking out “freely and fairly” about courts.

“We cannot expect that the judicial establishment will volunteer to reduce its powers by repealing the section in the contempt law with its Victorian notions of scandalising the court. It knows well that the only way it can gain respect is through its judgments and not through this ridiculous law. Since the law is unlikely to be repealed, we must try to make it redundant by speaking our minds about courts, judges and their judgments consciously and responsibly.”

Iqbal Chagla, senior advocate and former President of the Bombay Bar Association, said, “Among the freedoms protected by our Constitution, after liberty and life, the freedom of speech is the most precious. Freedom of speech, of course, is subject to reasonable restrictions. One does not realise how precious freedom is until one loses it.” He cited the example of the Emergency to describe the impact of the suppression of freedom of speech and the notable role courts played in upholding democratic rights at that “dark” time.

“The freedom of speech includes the freedom to receive information. During the Emergency, this too was denied. The press was muzzled and there was no electronic media. Censorship was the order of the day and we were told only what the government wanted to know,” he said. “In this gloom, the high courts -- and I speak with personal knowledge of the Bombay High Court -- were a beacon of light. In a case where the police commissioner denied permission for a meeting to discuss civil liberties and the rule of law, the Bombay HC set aside the order.”

Reiterating the importance of the Supreme Court and its role in upholding democratic institutions, he said: “All our institutions are being debased. This is where we have always in the past turned to courts for protection to set right what we believe is going wrong. The Supreme Court, unfortunately, has let us down.”