A section of the hill residents, however, feel short-changed by the BJP, which earlier showed sympathy towards the Gorkhaland agitation, but is coy about the demand in this poll, as it does not want to spoil its chance in the other 41 seats in Bengal. 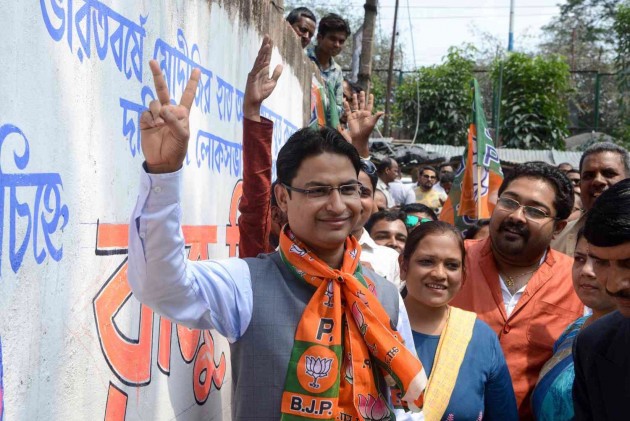 The undulating hills carpeted by centuries-old tea gardens and Mount Kanchendzonga that stands as a sentinel of the Darjeeling Hills, home to the champagne of teas, -- this pristine landscape however betrays the underlying turmoil of the politically restive hills that goes to polls on April 18.

Once renowned for its Tea, Timber and Tourism, the hills have witnessed a slew of bloody agitations for a separate statehood of Gorkhaland since the mid-1980s — an emotive century-old demand that every hill-based political party has flogged.

But the political winds blowing up from the plains of Siliguri and the Himalayan foothills of the Terai, are different this time.

The regular revival of the emotive Gorkhaland demand has until now led to at least three violent and prolonged agitations that kept successive governments in Bengal, including the Marxist-led Left Front and Trinamool Congress, on tenterhooks over the last three decades.

The decades-old demand for a separate homeland for the Gorkha people to be carved out of the two hill districts of Darjeeling — which comprises of Darjeeling, Kurseong and Siliguri sub divisions —and the newly-minted Kalimpong district — which includes parts of the Dooars in neighbouring Jalpaiguri and Alipurduar — has taken a backseat.

The decades-old rhetoric is missing this time around. Instead, all the major political players in the hills — the BJP, the Trinamool Congress, the two rival factions of the once dominant hill political force, the Gorkha Janmukti Morcha (GJM) — are harping on the “Gorkha Pride”, development, identity for the Gorkha people of Indian origin, and are shy of raising the Gorkhaland bogey.

Though the wounds of a violent 104-day agitation are still fresh in public memory, the principal parties in the fray are wary of whipping up the emotive statehood demand.

The Darjeeling parliamentary constituency, which shares a border with Nepal in the west and Bhutan in the east, comprises of seven assembly segments, including Darjeeling, Kurseong — in the hill — Kalimpong — in the hills and the Dooars — Siliguri, Matigara-Naxalbari, Phasidewa and Chopra — in the Terai and the plains.

The Darjeeling seat gave the BJP its first parliamentarian from Bengal in 2009 with Jaswant Singh winning the seat with a sizable margin, thanks to the popular support of the GJM, then led by its now fugitive leader Bimal Gurung.

In 2014, too the GJM supported the BJP on “the promise to consider the demand of Gorkhaland“ and helped SS Ahluwalia to win the crucial seat.

However, the BJP, which is eyeing a third straight term in Darjeeling, has made no mention of the statehood demand in its manifesto, but only promised a “permanent political solution for Gorkha living in the Darjeeling hills, the Terai region and the Dooars in neighbouring Jalpaiguri and Alipurduar and Scheduled Tribe tag for 11 Gorkha sub-tribes  and reserved assembly seats in Sikkim for the representatives of the Limbu and Tamang tribes people”.

This time, the BJP is not repeating Ahluwalia, who faced a lot of flak for being “absent” from his constituency during and after the 104-day shutdown in the hills — that led to violent clashes between the pro-Gorkhaland agitators and state security forces that led to the deaths of 14 people.

The saffron party has brought in a “political greenhorn” — Raju Singh Bista, a 39-year old industrialist, the managing director of Surya Roshni  Ltd, a fan and light manufacturing conglomerate.

Though Manipur-born Bista has a Gorkha lineage, many in the Darjeeling hills consider him as an “outsider”.

Bista has old ties with the RSS and is a major contributor to the BJP party coffers, according to a GJM leader of the Gurung faction.

Bista, however, has the support of the Bimal Gurung faction of the GJM as well as that of the Gorkha National Liberation Front (GNLF) — the party that had spearheaded the first violent movement for Gorkhaland in the 1980s.

The Trinamool, which has never won the Darjeeling parliamentary seat, though it is well entrenched in the plains, Terai and Dooars assembly segments, has picked veteran GJM legislator from Darjeeling, 68-year-old Amar Singh Rai, as the party’s candidate with the backing of the Tamang faction of the GJM.

Trinamool supremo and Bengal Chief Minister Mamata Banerjee is steadfastly opposed to giving away anything to the Gorkhas except partial autonomy the Gorkhaland Territorial Administration (GTA) enjoys.

Banerjee has, however, been trying woo the hill people and has been trying to bring investment to the region after the “misstep” of trying make learning Bengali compulsory in hill schools — which led to the 2017 flareup in the hills. She has been focusing on development and identity of Gorkhas and granting forest rights to people living on forest and tea garden lands for centuries.

A section of the hill residents, however, feel short-changed by the BJP, which earlier showed sympathy towards the Gorkhaland agitation, but is coy about the demand in this poll, as it does not want to spoil its chance in the other 41 seats in Bengal.

In the last three decades, the people in the Darjeeling hills have bucked the political trend repeatedly by electing representatives who were foisted on them by the national parties — first it was Delhi-based journalist Inderjit Khullar, who was elected on a Congress ticket in two consecutive Lok Sabha polls with the support of Subhash Ghishing’s GNLF.

Ghishing, however, boycotted the next three general elections in 1996, 1998 and 1999 over different issues relating to the Darjeeling hills.

The CPI(M), taking advantage of the GNLF’s boycott in the three assembly segments, won the parliamentary seat on the three occasions. However, the Marxists have failed to make any inroads in the hill political landscape since the late 1990s.

Darjeeling will have a multi-cornered contest. Apart from the BJP and the Trinamool, the Congress have fielded veteran leaders and sitting legislator from Matigara-Naxalbari Shankar Makakar and the CPI(M) Rajya Sabha member Saman Pathak. Also in the fray are former GJM legislator from Kalimpong and Jan Andolan Party chief Harka Bahadur Chettri and host of independent candidates.

But with the possibility of fugitive Gurung making an appearance in the hills becoming more unlikely, the fight for the Darjeeling seat has become a proxy electoral battle between Bimal Gurung and Mamata Banerjee.

A victory for Rai, will, however, bolster Banerjee’s influence and hold on the hills, where she is eyeing to wrest the three hill assembly segments in 2021.

Whatever the poll outcome, hill voters who have a developed a sense of fatigue from the decades-old turmoil, want peace and tranquillity to be restored in the Queen of Hills.