Darjeeling Toy Train Back On Track After More Than A Year

The passengers are asked to comply with Covid-19 necessitated regulations like social distancing, wearing masks, etc. 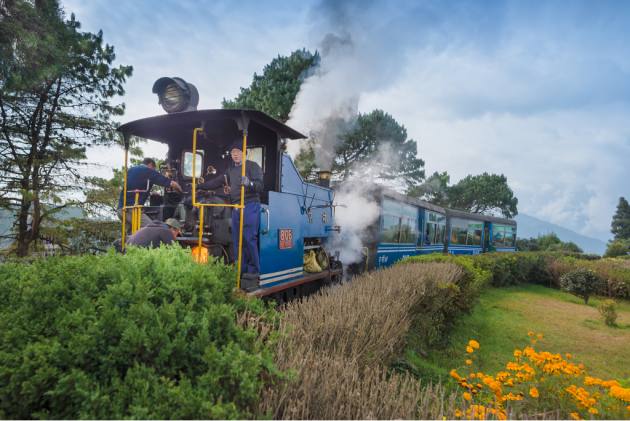 Darjeeling’s famous toy train, also known as Darjeeling Himalayan Railway (DHR), is set to resume services from Wednesday, August 25, after a gap of more than a year.

The railway staff has been assigned to sanitize the compartments of the train. The passengers of the DHR will have to comply with Covid-19 necessitated regulations like social distancing, wearing masks, etc.

The story of the Darjeeling toy train dates back to the colonial era. Built between 1879 and 1881, the train’s maiden trip was in the year 1880. It climbs about 100 m above sea level at New Jalpaiguri to about 2,200 m at Darjeeling and covers a distance of 88 km on a zig-zag track.

The train is said to be running on 100-year-old diesel engines. It comprises age-old compartments along with a narrow-gauge having an aperture of two feet between them. The Darjeeling Himalayan Railway was also declared as a ‘World Heritage Site’ by UNESCO in the year 1999.

As per a statement released by the Northeast Frontier Railway (NRF), the toy trains will be riding between New Jalpaiguri and Darjeeling in West Bengal on Wednesday, August 25. It will have 17 seats in the first class and 29 seats in the second class for the travellers.

Alongside, the BJP government is also planning to privatize the DHR under the National Monetization Policy (NMP) as notified by Nirmala Sitharaman, the union finance minister on August 23.

The centre will contribute Rs. 6 lakh crores for the monetization of infrastructure assets, comprising 400 stations, 90 passenger trains, railway stadiums, and colonies, etc. The decision has been taken, bearing in mind the advancement of infrastructure, tourism as well as job opportunities. However, many tour operators are at odds with the interest of this action and are planning to write to the centre. Many fear that the acquisitions may invade the value of the heritage site.

The toy train has been one of the primary tourist attractions of Darjeeling. The heritage site exhibits historical significance, natural beauty, and cultural values. The journey of Darjeeling’s toy train has spectacular views of lush green valleys, tea estates, hills, bridges, mountaintops which generates a sense of nostalgia in us while cherishing the scenes of the film ‘Aradhana’ where late actor Rajesh Khanna sings the superhit song ‘Mere Sapno Ki Rani’ to actress Sharmila Tagore on the toy train.