A slew of events were scheduled for the ministers including inauguration of conference halls, inter-zone district level competition, laying foundation stones of BDCs and visit Pahalgam and Gulmarg. 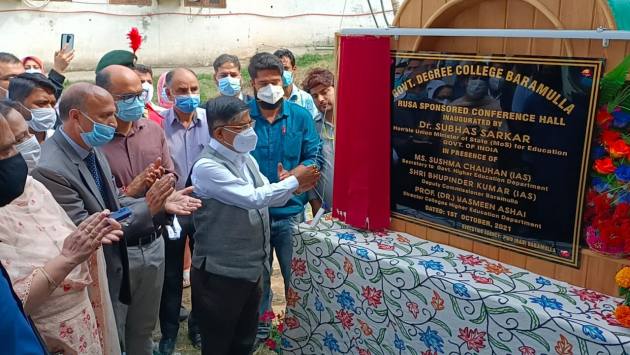 Panther’s Party president Harsh Dev Singh described the visits of central Ministers as being “sabbatical in J&K at public expense.”

Singh said the rest of the states of the country facing turmoil and disturbances in the wake of raging inflation and farmers agitation, the Union Ministers appear to have chosen the peaceful and calm environs of J&K for a pleasant break.

According to the government spokesman, the Union Minister of State for Education Dr Subhas Sarkar Friday inaugurated a multipurpose Conference Hall at the Government Degree College Baramulla that has been developed at an estimated cost of Rs 1.14 crore.

In another event on Friday Union Minister of State for Steel and Rural Development, Faggan Singh Kulaste laid the foundation stones of Block Development Council Office at Wavoora and Alama Anwar Shah Sports Stadium, Kuligam coming up at a cost of Rs.97 lakh and Rs.20 lakh respectively in Lolab subdivision of Kupwara district. The Minister laid an e-foundation stone of 15 sold waste management pants costing Rs.1.20 crore coming up in the frontier district, a government statement added.

In another event Union Minister of State for Textiles and Railways, Darshana Vikram Jardosh Friday visited district Kulgam.  According to the government spokesman, during the visit, the Minister took part in a series of events and activities that witnessed the participation of public officials and delegations. She also inaugurated developmental projects and interacted with multiple public delegations, members of Panchayat Raj Institutions, SHG members, tribal delegations youth clubs and entrepreneurs among others.

On Friday the Union Minister for Tourism G. Kishan Reddy wrapped up his two-day visit to Kashmir. During his visit, the Union Minister, according to the government statement, kick-started several developmental projects including a ten-bedroom tourist complex at Verinag,  apple resort at Ladoora Rafiabad, wayside amenities at Awantipora among others. Later in the evening, the Union Minister had a tour of the famed Dal lake and praised its beauty.

Political parties in Jammu and Kashmir say the visits have become costly for the J&K administration.

“70 ministers are coming to Jammu and Kashmir in nine weeks starting from mid-September. They are not visiting places alone. All administration is busy with them for inaugurating projects that were already inaugurated by previous governments,” says  J&K Congress president G A Mir.

“J&K govt is spending Rs 400 on them so that they get news of inaugurations of minor programmes which were done at district or zonal level by DCs and Sarpanches,” Mir says. He says they have not fulfilled to give small bridges they had committed in the first outreach last year. “This Ministerial visits are nothing but a burden on administration,” says Mir.

“The visits of the Ministers keep all administration busy. The administration is busy with the Ministers and the people are not getting any relief,” says the People’s Alliance for Gupkar Alliance (PAGD) spokesman and senior Communist Party of India leader Mohammad Yousuf Tarigami. He says these are just public relations exercises having an impact on the ground. “Kashmir is a good tourist place and they seem to enjoy the tours,” he adds.

“These Central Ministers are on a sabbatical in J&K on govt expense far away from the heat generated by the protesters across the nation over anti-people policies of govt and other issues. The places of visit have been randomly selected by the said Ministers in consultation with their local party colleagues ensuring that troublesome areas are omitted from their itinerary and disgruntled people are avoided,” Harsh Dev Singh said.

“Ministers were indulging in inaugurations of some petty development works having nothing to offer to the people of J&K with their speeches full of tired shibboleths”, Singh  said.

Taking a pot-shot at the Ministers for making announcements of some development schemes, Singh said that majority of them were already ongoing projects. “And several other announcements were only a repetition of the promises made earlier,” he added.