G.C Murmu took oath as the first Lt Governor of the Union Territories Jammu and Kashmir 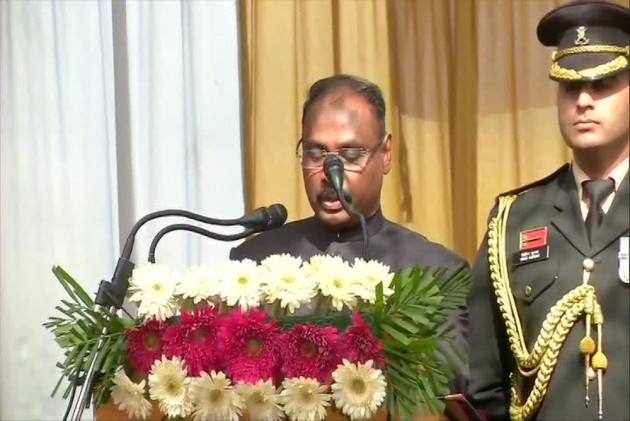 Jammu and Kashmir Lieutenant Governor G C Murmu visited the police headquarters shortly after its reopening here on Monday as part of the bi-annual 'darbar move' and advised the officers to stay alert and deal firmly with elements inimical to the safety and security of the people.

Amid tight security arrangements, the Civil Secretariat, which is the seat of the Jammu and Kashmir government, and other offices reopened here after functioning for six months in Srinagar as part of the nearly 150-year-old 'Darbar Move' practice.

The bi-annual shift is the first after the state's division into two Union Territories of Jammu and Kashmir and Ladakh which came into existence on October 31.

Murmu appreciated the synergy between the police, Army, the Central Armed Police Forces and the civil administration, and urged them to work with the same zeal to maintain peace and security in the newly created Union Territory, an official spokesperson said.

The Lt Governor received a guard of honour during his visit to the police headquarters and interacted with Director General of Police Dilbagh Singh and other senior police officers, the spokesperson said, adding the DGP briefed him about the law-and-order scenario and multiple challenges before the police.

"Murmu advised the police officers to stay alert and deal firmly with elements inimical to the safety and security of the people and stressed stern action against those involved in economic offences," he said.

After inspecting the ceremonial guard of honour at the Civil Secretariat, the lieutenant governor held a meeting with administrative secretaries and discussed with them important and urgent administrative issues, the spokesperson said.

Murmu also interacted with all the officers of the Civil Secretariat and sought their suggestions for further improving the quality and pace of work.

The lieutenant governor reiterated the government's resolve to tirelessly work towards ensuring responsive and good governance at all levels, the spokesperson said, adding Murmu advised the officers to keep public welfare as a central motto while discharging their duties.

Expenditure Secretary Girish Chandra Murmu on October 25 was appointed the first Lt Governor of the Union Territories Jammu and Kashmir replacing erstwhile Governor Satya Pal Malik who has been shifted to Goa.