'Deeply Saddened By The Loss Of Life': PM Modi On PIA Plane Crash In Pakistan

PM Modi said he was 'deeply saddened by the loss of life due to a plane crash in Pakistan'. 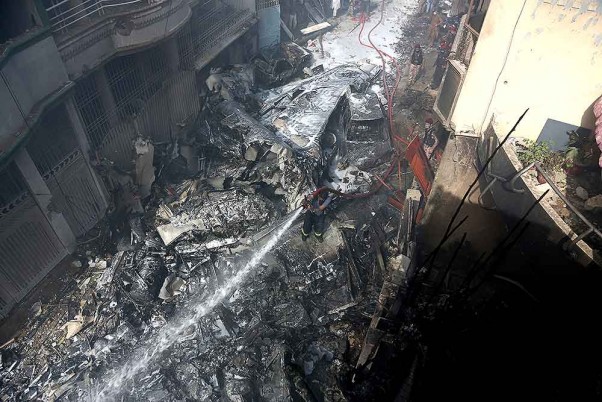 Prime Minister Narendra Modi on Friday expressed sadness over the loss of lives due to a plane crash in Pakistan's Karachi.

"Deeply saddened by the loss of life due to a plane crash in Pakistan. Our condolences to the families of the deceased, and wishing speedy recovery to those injured," PM Modi wrote on Twitter.

A Pakistan International Airlines (PIA) plane crashed in a residential area near the Karachi Airport on Friday.

PIA spokesperson Abdul Sattar confirmed the crash and added that the flight, A-320, was carrying 107 passengers and was flying from Lahore to Karachi.

Also Read: A Look At The Major Plane Crashes Of This Decade

The PIA Airbus A-320 carrying 99 passengers and eight crew members has crashed landed into the Jinnah housing society located near the airport, a spokesperson of the national airline said.

"The captain informed the air traffic tower he was having problems with the landing gear before disappearing from the radar,” he said.

A resident of the colony who witnessed the crash told the local media that the aircraft had fire coming from its wings which crashed into rooftops of some houses before it crash landed.

The Civil Aviation Authority sources said that its communication with the plane was cut off one minute before its landing.

Several houses have been damaged in the area where the aircraft crashed.

Pakistan Prime Minister Imran Khan expressed shock and grief over the plane crash and said an immediate inquiry would be launched.