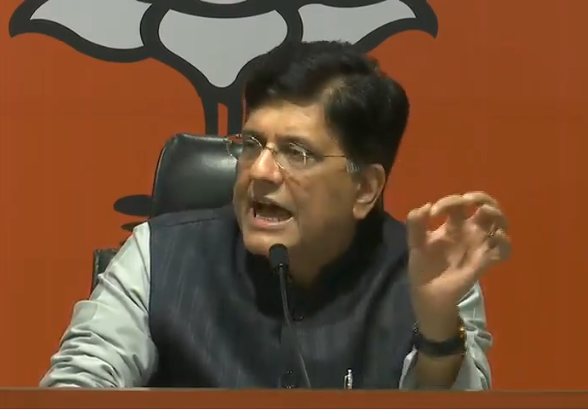 The Bharatiya Janata Party (BJP) on Thursday lashed out at Congress over the latter's criticism of electoral bonds, saying the grand old party was immersed in corruption, adding the Election Commission had recovered crores from many of its senior leaders recently.

Union Minister for Railways and Commerce Piyush Goyal, in a press conference, said: "This is the same lobby that had made dubious and wrong charges on the Rafale deal and has been rejected by the people of India. The Supreme Court, too, quashed their false claims."

Speaking of electoral bonds, Goyal said the BJP had ensured that "whatever money is used in election proceedings must come from the bank, through the KYC procedures, and can be issued by selected SBI branches so that the SBI can keep its track."

"Any person can donate money after buying bonds from the bank via his clean, hard-earned money. These people are agitated because they won't get this money via corruption and the money will now be clean," the minister added.

Accusing the Opposition parties of indulging in corruption, Goyal said: "People revolting against electoral bonds have grown used to black money and believe in its usage during elections. This is the alliance of the defeated and dejected corrupt politicians who do not want clean, tax-paid transparent money to fund elections."

Congress MP Manish Tewari raised the issue before the party members staged a walkout. The party termed it a "big scam".

Under the electoral bonds scheme, the government has offered complete anonymity to those making donations. A donor could now anonymously buy a bond and deposit it with the political party of his or her choice.

However, the party members returned to their seats after the protests and sloganeering in the Well of the House for about 15 minutes when Speaker Om Birla assured them that they will be allowed to raise issues during Zero Hour.