P Varavara Rao, the activist and poet is presently facing trial in the Bhima Koregaon case. 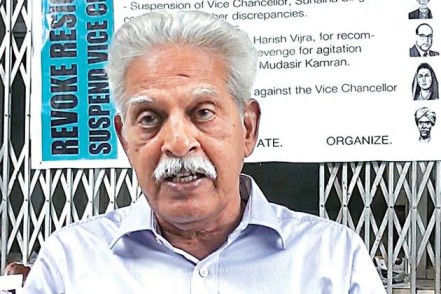 The delay in the publishing of a collection of poems by activist and poet P Varavara Rao, scheduled to come out earlier this year, has been attributed to an unfavourable “legal opinion”.

Rao (81) is currently facing trial in the Bhima Koregaon case.

After the news of delayed publishing drew sharp reactions on social media against the publishers, the editors of the book “Varavara Rao: India’s Revolutionary poet” author Meena Kandasamy and Telugu journalist and Rao’s nephew N. Venugopal, clarified saying that they “reiterate our trust in Penguin Randomhouse India, and await a favourable, second legal opinion”.

According to Venugopal, Penguin Randomhouse India's announcement in October last year, following the signing of the contract that the book would come out in mid-2021, even though legally the contract said they had 24 months time, could have led to the "unwarranted speculation".

He asserted that the publishers had time till October 2022 to bring out the book, and to say that the book has been stalled would be “premature”.

“As I understand, after signing the contract, Penguin issued a press release which said that the book would come out in mid 2021, but it didn't. I don’t know why they (publishers) said that, even though the contract said 24 months.

“It is premature to say whether it is stalled or it is going to come out. Publishers have time till 2022.Till that time nobody can say anything,” Venugopal said.

He added if the publishers failed to bring out the book by October 2022, “editors can either sue them for breach of contract, or we can make a public issue that they have stopped the publishing.”

While the publishers refused to go into the specifics of the situation, an official spokesperson of Penguin Random House India said, “the book continues to be part of our publishing schedule”.

Elaborating on why three of the 65 selected poems were dropped from the collection, Venugopal said that that was because of “some legal problems” since they were written while Rao was facing trial.

“There were some legal problems because he is under a case, so the poems that he wrote during the case are subjudice so that’s why we dropped the three poems. The publishers said because he is in a case, this may lead to trouble,” he said.

However, Penguin in 2010 had published a translation of a collection of Rao’s letters from prison titled, “Captive Imagination”.

“I argued that Penguin has published his letters from prison in 2010, so if writing from the prison is not a problem, these poems (in the new book) are only re-publications of what appeared in Telugu for the last 60 years. So after I put forth my argument, they said they would go for a second legal opinion, and they are getting that,” Venugopal said.

“He has written about those who got killed in movements, he wrote about children, he wrote about human relationships, he wrote against Hindutva…he wrote about a thousand poems in his 60 years of poetic life…and he has published 16 collections…his first collection came out in 1968, and the latest was in 2014, so we took care to take three-four poems from each collection to represent his trajectory,” Venugopal said.