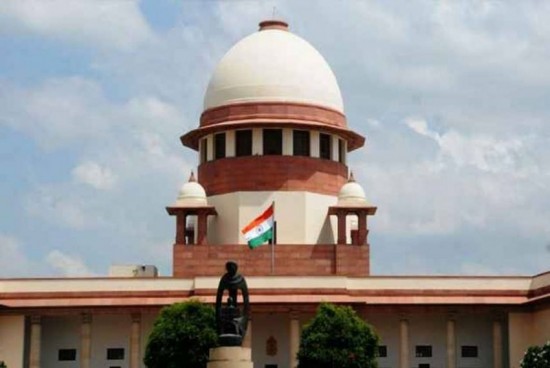 The Supreme Court Friday took note of “slight” improvement in air pollution level in Delhi-NCR and permitted the commission on air quality management to take a decision on various representations seeking easing of curbs, like ban on construction activities, within a week.

A special bench comprising Chief Justice N V Ramana and Justices D Y Chandrachud and Surya Kant asked Uttar Pradesh and Rajasthan to comply with its earlier order by which it had asked the National Capital Region states to pay minimum wages to construction workers from the cess, collected by them from real estate firms, as their work was hit due to the ban.

Rajasthan and Uttar Pradesh governments will have to file compliance affidavits on the issue related to payment of money to construction workers, it said.

"We direct the Commission (the Commission for Air Quality Management in the National Capital Region and Adjoining Areas) to examine requests of various industries & organisations about relaxation of conditions imposed by virtue of our orders or otherwise as per their circulars. We expect the commission will look into this in a week's time," the bench said.

The bench decided to dispose of several intervention pleas including those filed by builders’ body, sugar, rice and paper mills against certain curbs imposed by the commission and others including the top court and asked the panel to decide these issues.

The bench, at the out set, said that now there is "slight improvement in the quality of air" and the commission may be allowed to decide the issues pertaining to curbs.

Senior advocate Vikas Singh said that now things have gotten better since the crucial period is over and sought vacation of an earlier order by which the ban on construction activities was re-imposed.

Solicitor General Tushar Mehta, appearing for the Centre and the commission, said that several long term measures are in contemplation to deal with the issue of air pollution.

“We cannot get into all the individual cases... I am sorry to say that if all states and the Centre took steps regarding controlling pollution then we would not have entertained this,” the CJI said and asked the Delhi government to approach the commission.

On December 3, the bench had directed the Centre and the NCR states to implement the panel's order to curb pollution and sought a proposal to ensure switching over of all industrial units to PNG or cleaner fuel in a time-bound manner or face closure.

The bench had also rued that some news reports tried to "portray” the court as a "villain" that wanted to close down schools in Delhi-NCR.

It had taken note of the Commission's proposal that industrial operations in the NCR, where gas is not available and the industrial unit is not running on PNG or cleaner fuels, shall be allowed to operate only up to eight hours a day during weekdays and shall remain closed during Saturdays and Sundays.

“Let a proposal to switch over all the Industrial Units to PNG or cleaner fuels in a time bound manner, failing which such Units should be closed down, be also placed on record,” it had ordered.

The commission had said that a five member enforcement task force has been set up to contain air pollution in Delhi and NCR and 40 squads would monitor the implementation of measures suggested by it to deal with pollution.

The panel had also said that 17 flying squads have been set up to ensure the implementation of various measures mandated by the court which would be raised to 40 within 24 hours.

Ban on entry of trucks, excluding those carrying essential goods and those running on cleaner fuel, will continue, it said.

The bench has been passing orders on a plea filed by Aditya Dubey seeking urgent steps to improve the air quality in Delhi-NCR.