Centre For Science and Environment (CSE) tells Outlook, unless the government builds infrastructure, winter pollution in Delhi will remain a constant, annual problem. 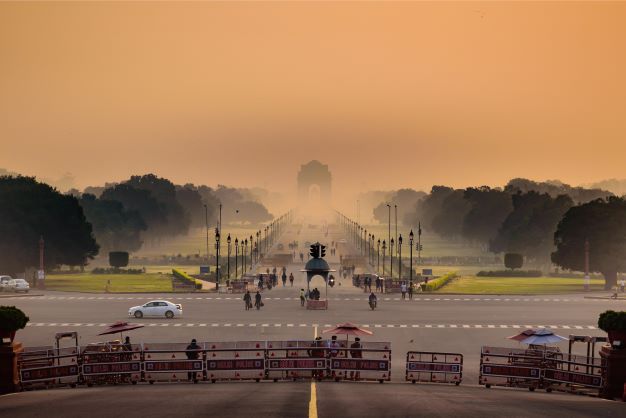 Even as the Delhi government has pushed emergency notifications to tackle its current ‘Hazardous’ AQI which has breached 900, Delhi’s winter air pollution may continue to remain an annual event. Despite all efforts to introduce clean fuel and smog towers, the Arvind Kejriwal government may still have a lot to clean up and enforce. The state governments of Haryana, Uttar Pradesh and Rajasthan too may have to pitch in. Anumita Roy Chowdhury. Executive Director Research and Advocacy, Centre for Science and Environment elaborated on areas where work is still left when it comes to dealing with Delhi’s AQI pollution problem and why emergency action may be far from enough; and in fact may back-fire. Five key reasons:

1. Weather: Delhi, its neighbouring cities and entire northern India experiences a phenomenon called winter inversion. A typical weather phenomenon which results in low wind speed combined with a dip in temperature which leads to a ‘low mixing height’ and brings down the pollutants closer to ground. The pollutants become ‘trapped’ and as regular, day-to-day pollutants continue to pile, the pollution levels spike. “There’s nothing new about the winter pollution situation of Delhi, NCR and the entire northern India at this time because North India is land-locked and every year this mix of weather condition and pollution results in smog. Emergency action may not work as well and may backfire in other ways. If vehicles are stopped, people will be stranded and the situation could actually work against normal functioning of the city. The issue requires long-term infrastructure development,” said Roy Chowdhury.

2. Garbage: Waste management in Delhi and its neighbouring cities is not carried out in adequate measure. Roy Chowdhury says that industrial pockets of Delhi still have a considerable about of garbage burning in progress, even as the pollution levels are high. “Delhi and its surrounding cities still are grappling with the issue of waste management. Unless industrial waste and horticulture waste is processed properly, garbage burning will continue to remain a major contributor to the pollution markers of the region,” she said.

3. Cars: Delhi still does not have a mass transport system to support the requirements of its population. Besides, it has a high concentration of private vehicles. Unless the private vehicle users shift to mass transport, a long-term solution to the city’s vehicular pollution is not going to take place anytime soon. “Delhi and its surrounding cities need a heavy network of public transport. Delhi has 1.3 crore cars. The contributors to Delhi’s pollution are industry, vehicles and construction, but cars continue to be a big factor” said Roy Chowdhury.

5. Crop burning: Construction activity is at peak in the NCR with development and housing projects concentrated in its fringe cites which contributes to the PM10 component of the Air Quality through the year. But seasonal crop burning in Haryana and Punjab contributes to PM 2.5 levels and is a hazard every winter for the city. “This year, there was not much problem from crop burning initially because in October it rained. But the crop burning issue peaked in early November. On November 6, crop-burning contributed to 48% of the pollutant mix of Delhi air. The 20 days of annual crop burning continue to add to the local pollution problems at this time and unless long term solutions are found, emergency measures may not led to solutions. The measures taken by the government in terms of clean fuel and more has helped reduce the annual air pollution average of Delhi, but the winter problem needs more focused action,” said Roy Chowdhury.