Delhi Records Over 61% Turnout As Voting Comes To End 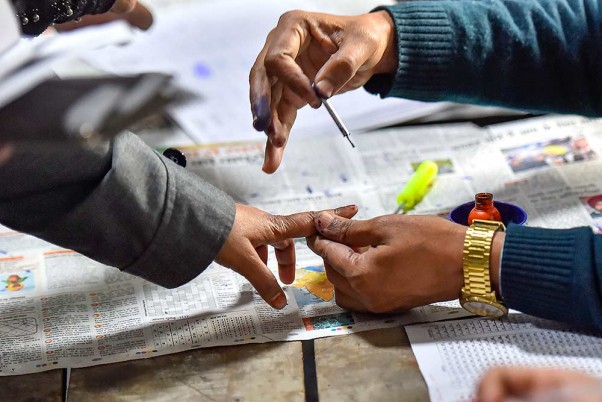 Despite a highly-charged and polarising election campaign, the national capital saw sluggish voting on Saturday, recording a 61.46 per cent voter turn out, compared to 67.08 per cent in 2015.

Voting percentage improved slightly to over 41 per cent by 3 pm as Delhiites queued up to cast their votes for the Assembly election on Saturday, poll officials said.

The polling was smooth and police maintained a strict vigil in sensitive areas.

Over 1.47 crore people were eligible to exercise their franchise in the polls that will decide the fate of 672 candidates in 70 assembly constituencies which are seeing a triangular contest among the ruling Aam Aadmi Party (AAP), opposition BJP and the Congress.

There were long queues outside some polling booths in areas dominated by minorities such as Jaffrabad, Shaheen Bagh, Seelampur and Jamia Nagar.

Asked why was the voting percentage low in the morning, Chief Election Commissioner Sunil Arora said it usually picks up as the day progresses.

There were some complaints related to VVPAT slips.

"I gave a written complaint to poll authorities after which the machine was replaced," Sabharwal said, adding that polling was halted for some time.

"Senior officers, along with forces, have been conducting flag marches in sensitive areas. Motorcycle patrolling are also being done. Besides, PCR and Quick Response Teams have also been deployed in sensitive areas," said Joint Commissioner of Police (Eastern Range) Alok Kumar.

Also Read | '...If Delhi Is To Be Saved From Islamic State': Giriraj Singh Urges People To Vote For BJP

Kejriwal, who is contesting the polls from the New Delhi constituency, was accompanied by his wife Sunita and son Pulkit. Before leaving for voting, he sought his parents' blessings.

Former vice president Hamid Ansari and senior RSS functionary Ram Lal were among those who queued up outside the Nirman Bhavan polling station in the first hour of voting.

Minutes before polling began, Kejriwal tweeted, "Please go to cast vote. A special appeal to all the women - as you shoulder the responsibility at home, likewise, the responsibility of the country and Delhi is on your shoulders."

"By giving Delhi clean air, clean drinking water and every poor house, only the best capital of the world can make it a government with far-sighted thinking and strong intentions.

"I appeal to the people of Delhi to vote to free Delhi from lies and vote bank politics," Shah tweeted.

BJP president J P Nadda also appealed to all the voters to vote in large numbers.

"Each vote of you is important for the unity and integrity of the country and holistic development of Delhi. Your vote only will be script the golden future of Delhi. 'Pehle Matdan, Phir Jalpan'. Jai Hind," Nadda tweeted.

Pulkit said he felt good after voting for the first time.

He said whoever people choose will become the chief minister of Delhi when asked if his father will be the CM again.

Talking to reporters, Rehan said public transport should be more affordable for students.

Taking a swipe at those protesting against CAA-NRC, senior RSS functionary Ram Lal said those shouting "kagaz nahin dikhayenge" would be defeated in the Delhi assembly election as he appealed to people to show documents while voting.

He asked voters to keep in mind who can make Delhi the best capital city in the world.

Hundreds of people, protesting against the Citizenship Amendment Act (CAA) and the National Register of Citizens (NRC) in many areas across the country, often raise the slogan of "kagaz nahi dikhayenge" (we will not show show documents.

Responding to AAP supremo and Chief Minister Arvind Kejriwal's allegation that no one in the BJP was worthy of becoming the CM, senior BJP leader Shyam Jaju, "We have no dearth of chief ministerial candidates. We will declare our CM face at the right time."

AAP candidate from Chandni Chowk Prahalad Sahni said that vote is being cast on the development plank, asserting that the Shaheen Bagh issue has no impact in the Delhi assembly elections.