The plane was toed and pulled out of the accumulated snow after over 200 passengers were evacuated, sources said. 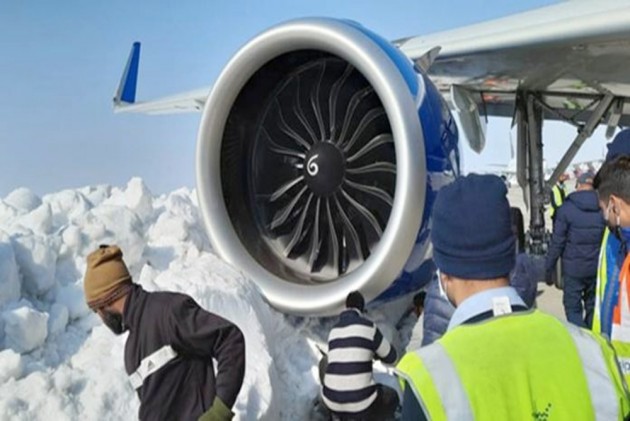 A Delhi-bound flight's engine on Wednesday afternoon got stuck in accumulated snow at Srinagar International Airport when it was taxiing to take off for Delhi.

According to IndiGo officials, flight 6E 2559 operating from Srinagar to New Delhi was held back at Srinagar. “While taxiing out, the aircraft came in close contact with the snow which was accumulated adjacent to the taxi-way. The aircraft is being held back at Srinagar for further inspections. An alternate flight was organised from Srinagar to Delhi to accommodate all the passengers,” the statement said.

The divisional commissioner, Kashmir, said Srinagar International Airport comes under the Directorate of Airport Authority and they had cleared snow at the airport according to their safety standards. He said the director of Srinagar Airport would be in a better position to speak on the issue.

According to the Met office, last night had been one of the coldest nights of the winter season in Srinagar with the temperature plummeting to minus 7.8 degrees Celsius. The last time the temperature had dipped to minus 7.8 was in January 2012. The dip in temperature led to frozen taps, pipelines and slippery roads.