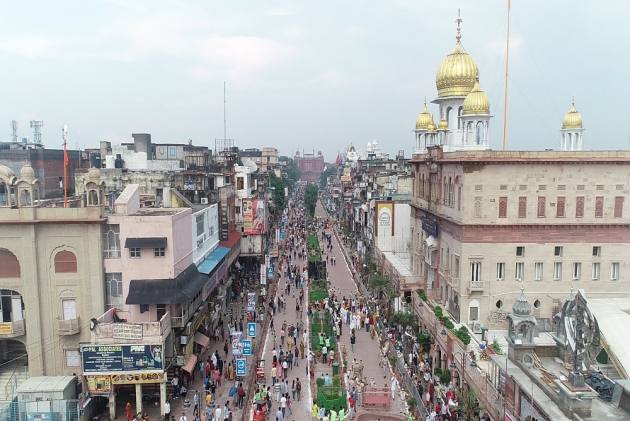 The CM announced that the entire area will be transformed into a tourist hub by allowing street food joints to operate till midnight.

“Chandni Chowk had a very dirty image. We have beautified almost 1.4 km stretch of the Chandni Chowk market and made it extremely beautiful. Traffic on the stretch was improved, dangling wires were made underground, and CCTVs were installed under the redevelopment project,”  Kejriwal said.

The CM said people from all over the city are coming to see the redeveloped market and it has now become the "most important tourist destination".

Addressing the gathering near Fountain Chowk in the Chandni Chowk main market, Kejriwal said after the redevelopment, Chandni Chowk has become more beautiful and people come here to walk till midnight.

"It has already become an important tourist place. I came to know that people come here to roam till midnight.

Earlier the project was to be inaugurated on April 17 this year but was cancelled due to the second Covid wave.

Responding to a question later on extensive waterlogging in the city a day after record heavy rains threw normal life out of gear in the national capital, the chief minister said the drainage system throughout Delhi needs to be fixed.

"We got this 'idiosyncratic' drainage system' as a gift from the previous governments. It needs time, it was never worked upon by them earlier. But I can assure you after some years, you won't see waterlogging anywhere in Delhi," he said.

One who had visited old #chandnichowk would find it difficult to believe on his/her eyes after seeing this newly developed Chandi Chowk.
Great job! @ArvindKejriwal @msisodia @SatyendarJain @ImranHussaain https://t.co/cTDa1fyadr

Record heavy rains lashed the national capital on Saturday, making it the wettest monsoon season in 46 years and causing extensive waterlogging that affected operations at the Delhi airport, disrupted traffic on key roads and left passengers trapped in vehicles in flooded underpasses.

Meanwhile, Delhi BJP workers along with a section of traders of the area staged a "silent protest" during the inauguration against restrictions imposed on loading and unloading goods in Chandni Chowk after the redevelopment.

In the redevelopment project, the main Chandni Chowk stretch between the Red Fort and the Fatehpuri Masjid crossing has been improved and beautified.

The stretch has been developed as a pedestrian-friendly corridor and made aesthetically appealing with the help of red granite stone, decorative lights, plants and and street furniture among others.

The stretch has been made a "no traffic zone" for motorised vehicles between 9 am and 9 pm.

According to PWD officials, the project was approved in August 2018 and work on it began in December 2018.

It was to be completed in March 2020 but the project got delayed due to the coronavirus pandemic and its deadline was further pushed to December 2020.

The project got delayed further and was set for inauguration in April this year but the event was cancelled due to surge in COVID-19 cases during the second wave.

SRDC is the nodal agency of the redevelopment project.

In the redevelopment project, priority has been given to pedestrian facilities as nearly 2.5 metre wide footpath has been provided for them.

The redeveloped stretch has 197 electric poles and 124 CCTV cameras have been installed all over the area.

Jain said the area will be given a further facelift.

"We will soon operate electrical vehicles that match with the look of the area for the convenience of people. This redevelopment work is a glimpse of how the Delhi government will make entire Delhi the most beautiful city in the world," Jain said.

According to a statement issued by the Delhi government, the redeveloped Chandni Chowk has facilities like toilets, water ATMs and dustbins for pedestrians to walk without inconvenience.

Provision has been made for unisex toilets and ramps for people with disabilities. It has 'divyang' friendly tactile flooring as well, it said.

Four earthen and sandstone signages have been installed on which information has been given in Hindi, English, Urdu and Punjabi.

Seating bollards and sandstone seats have been installed on the road so that the tourists do not get inconvenienced, the statement said.

Meanwhile, Delhi BJP workers along with a section of traders of the area staged a "silent protest" during the inauguration.

Delhi BJP spokesperson Praveen Shankar Kapoor said after the redevelopment, traders of the area are finding it difficult to load-unload their goods as the entire region has been made a "non-motorised zone".

"Traders of the area are not happy as they are facing issues in loading unloading of goods. Waterlogging in the area is also bothering traders and residents of the area. The government should increase the time limit to load unload goods in the market," Kapoor said.