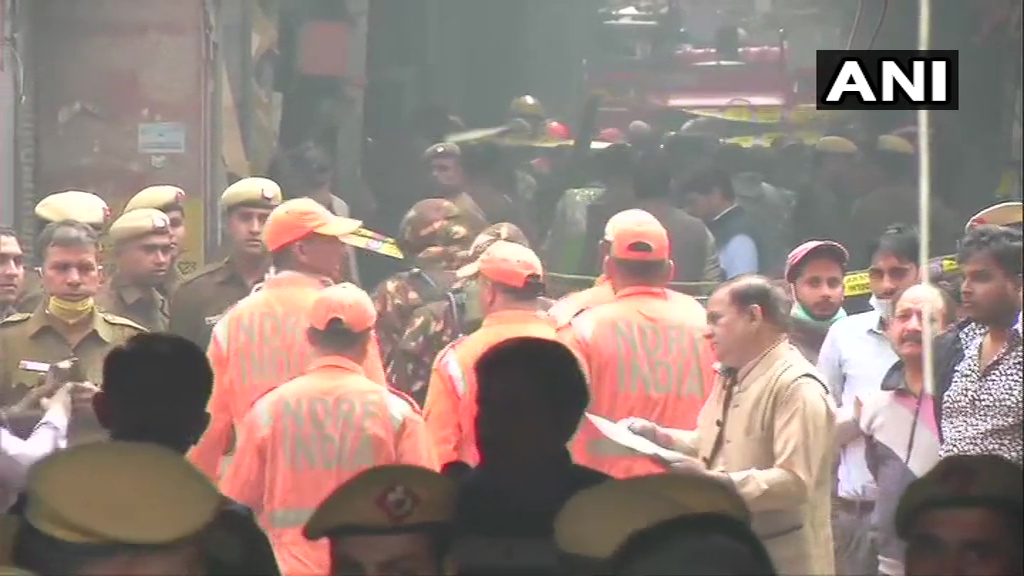 The Arvind Kejriwal-led Delhi government on Sunday ordered a probe into the fire incident at Delhi's Anaj Mandi area in which at least 43 people lost their lives.

Revenue Minister Kailash Gahlot directed the district magistrate (central) to conduct an inquiry and submit a report within seven days.

CM  Kejriwal also announced the government will give Rs 10 lakh ex-gratia to families of those killed in a fire incident and Rs 1 lakh to the injured.

Meanwhile, politicians from across the political spectrum expressed shocked over the unfortunate incident and conveyed their condolences to the families of those killed in the fire that broke out in the wee hours of Sunday.

Prime Minister Narendra Modi tweeted: "The fire in Delhi’s Anaj Mandi on Rani Jhansi Road is extremely horrific. My thoughts are with those who lost their loved ones. Wishing the injured a quick recovery."

Congress president Sonia Gandhi expressed her deepest condolences to the families and urged authorities of the central and state governments to provide all assistance to victims and their kin.

Gandhi expressed "deep shock and dismay" at the horrendous fire accident in a factory in Anaj Mandi area that has claimed several innocent lives.

"Expressing her deepest condolences to the families and loved ones of over four dozen deceased in the tragic accident, Gandhi hoped that maximum lives will be saved and those injured are treated expeditiously," a party statement said.

Home Minister and BJP President Amit Shah tweeted, saying, "Tragic loss of precious lives in the fire accident in New Delhi. My deepest condolences with families of those who have lost their loved ones. I pray for the early recovery of the injured".

"Have instructed concerned authorities to provide all possible assistance on an urgent basis," he said.

Rahul Gandhi, the Congress leader, took to Twitter and wrote in Hindi: "Saddened at the news that a massive fire in the Anaj Mandi area of Delhi has claimed many lives and left several people injured."

"I extend my deepest condolences to the families of those killed and wish for the speedy recovery (of the injured)," he said.

West Bengal chief minister Mamata Banerjee tweeted: "Saddened to hear about the devastating fire in Delhi. My heartfelt condolences to the families and friends of the deceased. I wish the injured a speedy recovery."

A total of 59 people were inside the factory operating from a residential area when the blaze broke out, police said.