The Delhi Pollution Control Committee had earlier asked FICCI to stop work at the demolition site. 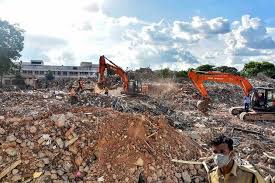 The Delhi government on Saturday imposed a fine of Rs 20 lakh on the Federation of Indian Chambers of Commerce and Industry (FICCI) for violating dust control norms at a demolition site on Tansen Marg here, according to an official order.

The commerce body has been told to deposit the environment compensation within 15 days, according to the order.

Directions have been issued not to carry out or restart any demolition activity without installing an anti-smog gun at the project site, it said.

"An undertaking to this effect should be submitted within 7 days. You should also take adequate measures to rectify the deficiencies observed during the inspection on October 9 and submit a compliance report within a week," it said.

The Delhi Pollution Control Committee had earlier asked FICCI to stop work at the demolition site.

It is mandatory to install anti-smog guns at construction and demolition sites larger than 20,000 square meters, according to government guidelines.

There are 39 sites having 20,000 sqm of area in Delhi. Six of these sites do not have anti-smog guns and have been told to stop work, Environment Minister Gopal Rai had said on Friday.

Rai said serious violations were observed at the FICCI campus.

"The demolition waste is lying uncovered and there is no anti-smog gun. We have issued directions to stop work. If they still go ahead with it, legal and financial action will be taken against the contractor," he had said.

"Similar action will be taken against contractors at large sites violating dust control norms despite several warnings. No one will be spared," Rai added.