The lawyers will resume work from Saturday in the six district courts. 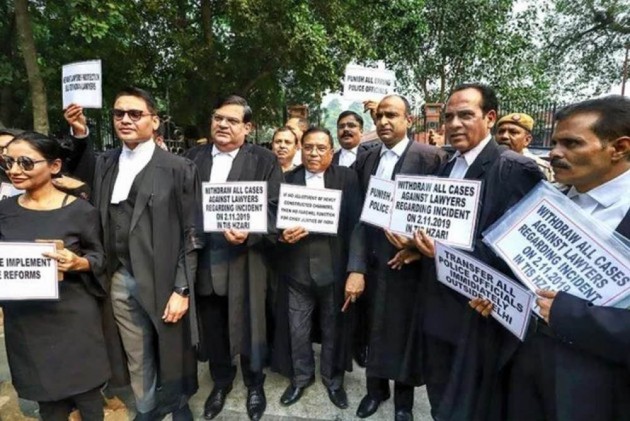 Lawyers in all the six district courts in Delhi called off their strike on Friday, which was underway since November 4 after a clash between advocates and police at the Tis Hazari court.

The Coordination Committee of All District Courts Bar Associations took the decision in a meeting of the office-bearers after the Delhi High Court order directed the lawyers to resolve the matter.

It announced that Lawyers will resume work in the district courts from Saturday.

"We respect the order of the High Court so the abstinence from work is suspended, work to be resumed from Saturday. Our fight for Advocates Protection Act will continue," said Mahavir Sharma, chairman of the organisation.

At least 20 security personnel and several advocates were injured in the clash over a parking dispute at the Tis Hazari court on November 2. Lawyers in the six district courts have been on strike since November 4 to protest against the clash.

In view of the Delhi High Court order granting relief to two police officials, further course of action will be decided after taking the view of the members of the Bar, the association said.

The Delhi High Court on Friday directed authorities not to take coercive action against two police officers who were booked in connection with the Tis Hazari Court complex clashes earlier this month.

A bench of Chief Justice D N Patel and Justice C Hari Shankar issued notices and sought responses from the Centre, Delhi Police, Bar Council of India (BCI) and other bar associations on a plea from the two assistant sub-inspectors (ASIs) seeking protection from any coercive actions in the FIRs registered against them till judicial inquiry into the incident is completed.

"Notice issued to the non-applicants. Counsel for respondents seek time to file replies. Let the same be filed within four weeks from today. Rejoinders thereto, if any, be filed before the next date of hearing. List these applications on December 23.

"In the meanwhile, no coercive action shall be taken against these applicants in pursuance to the (three) FIRs," the bench said in its order.

In the plea, the two ASIs also sought quashing of a November 11 order passed by a trial court, wherein the police was directed to file a status report on the investigation into the clash by November 20.

The police officers have sought a stay on the trial court's order and the proceedings in the matter till pendency of a judicial inquiry, which was ordered by the high court on November 3.