According to government data, the city's positivity rate has increased to 26.22 per cent, the highest since May 4 when it was at 26.7 per cent. 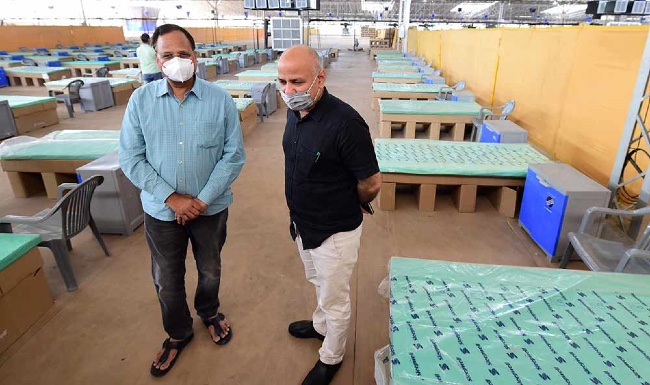 Delhi reported 27,561 Covid cases, the second-highest single-day rise since the pandemic began, and 40 deaths on Wednesday when the city's Health Minister Satyendar Jain claimed hospital admissions have stabilised indicating the current wave has peaked and cases may start declining soon.

The deaths recorded on Wednesday are the highest since June 10 last year, when the national capital recorded 44 fatalities. Delhi has already recorded 133 fatalities in the first 12 days of this month. It had logged 54 fatalities in the last five months -- nine in December, seven in November, four in October, five in September and 29 in August. In July, the virus had claimed 76 lives in Delhi.

Given that most of the patients who died due to COVID-19 in January so far were, the Delhi government has issued an advisory asking all hospitals to ensure that patients with comorbidities are duly attended by specialists. The city currently has 87,445 active Covid cases of which 56,991 are in home isolation. A total of 2,363 patients are in hospitals. Of 739 patients on oxygen support, 91 are on ventilator while 618 are in ICU.

The Delhi government's online yoga classes for coronavirus patients in home isolation kicked off on Wednesday. "This is a brilliant initiative... to keep the people engaged in physical activities while they are in isolation," Delhi Health Minister Satyendra Jain said on Twitter.

Earlier in the day, he said the number of daily cases has been hovering around 20,000 for the last few days and the positivity rate has consistently been around 25 per cent. "We have observed that the number of hospital admissions has stabilised in the last four to five days and only 2,209 of the 14,621 beds are occupied and 85 per cent of the beds are vacant," the minister told reporters.

"Plateauing of hospital admissions is an indication that the wave has peaked. We may see a decline in cases in two to three days," he said. Jain added that most of those who have died in the ongoing surge of infections had comorbidities and very few deaths have taken place due to coronavirus. "People with comorbidities are facing more problems, not many people are coming to hospitals for treatment of coronavirus," he said.

Intensifying its drive to check violations of Covid norms, the Delhi government On Tuesday issued over 5,500 challans over a total of Rs 1.10 crore fine was imposed. Jain had told reporters, earlier in the day, that Covid cases have started to decline in Mumbai and Delhi is likely to follow suit. "This, however, does not mean that the threat of Covid has passed. People should strictly adhere to all guidelines so that the spread can be controlled as soon as possible," he said, adding if cases come down in the next couple of days, restrictions will be lifted.

Delhi's Principal Health Secretary Manisha Saxena cautioned people against being complacent and urged them to take extra care of senior citizens. "Omicron is probably milder, but it's a variant of Covid. We can't be complacent. Pay attention to any symptoms, measure SPO2 levels regularly, seek medical attention. Call the Covid helpline 1031 for guidance, and take extra care of senior citizens," she said in a tweet. As many as 1,05,102 tests were conducted the previous day, including 85,349 RT-PCR ones. The number of containment zones stands at 20,878.