Delhi: The resident doctors have been protesting over the delay in counselling in NEET-PG 2021 for the past 12 days in the national capital. 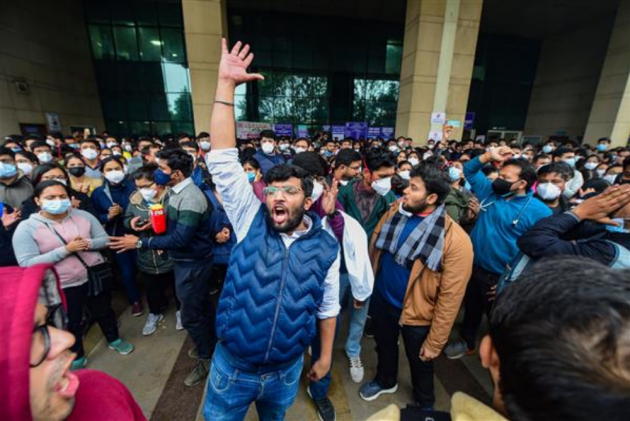 Resident doctors in Delhi, who have been protesting over the delay in NEET-PG 2021 counselling for the past 12 days, on Tuesday decided to continue the stir, as a meeting between their federation's delegation and the Union health minister failed to make any headway.

The meeting between a delegation of the Federation of Resident Doctors' Association (FORDA) and Union Health Minister Mansukh Mandaviya took place at Nirman Bhawan here, but the doctors' body said, the "response was not satisfactory".

Earlier in the day, intensifying their stir over the delay in NEET-PG 2021 counselling, resident doctors in Delhi on Tuesday morning gathered in large numbers on the premises of Centre-run Safdarjung Hospital, even as police personnel were deployed to ensure law and order is maintained.

Doctors raised slogans like 'We want justice', and sought to bolster the morale of each other, after the face-off with the police on Monday went all the way to midnight, as dramatic scenes were witnessed at the Sarojini Nagar police station.

FORDA president Dr Manish and few other protesting resident doctors, later in the day, met Mandaviya, who urged them to call off their strike in the larger public interest.

The stir, led by FORDA, entered its 12th day on Tuesday, even as patient care remained affected at three Centre-run facilities -- Safdarjung, RML and Lady Hardinge hospitals and some of the Delhi government-run hospitals.

In the meeting, all the points of concern were were put forward. "However, the response was not satisfactory," FORDA said in a statement late night.

"Also, after yesterday's brutal incident of violence by Delhi Police on peacefully protesting resident doctors, there has been no apology from the concerned (people). In fact, a FIR has been filed by police against protesting resident doctors. After discussion with various RDAs' representatives, it has been decided to continue the agitation till our demands are met," the statement said.

The protest by resident doctors, a day earlier had taken a dramatic turn, as medics and police personnel had faced off in streets, with both sides claiming several persons suffered injury in the ensuing melee.

Earlier in the day, a senior police officer had said, police personnel had been deployed on the premises of the Safdarjung Hospital to maintain law and order amid the ongoing strike by protesting residents doctors.

"Over 100 police personnel have been deployed. This is also to ensure the law and order situation at the hospital. The situation is normal and under control as of now. The resident doctors are peacefully protesting here," a senior police official said.

The police deployment was later withdrawn, when the situation cooled off.

The Faculty Association of Safdarjung Hospital had on Monday condemned the face-off between the protesting resident doctors and police personnel, while the resident doctors' association of AIIMS had urged the government to reveal its plans for expediting NEET PG counselling, failing which it had threatened to proceed with a token strike on December 29 including shutdown of all non-emergency services.

FORDA on Monday had also said that several of its members were "detained" when they tried to hold a protest march from the Maulana Azad Medical College (MAMC) to the Supreme Court.

FORDA president Manish on Monday had claimed that resident doctors of a large number of major hospitals on Monday "returned their apron (lab coat) in a symbolic gesture of rejection of services".

However, police on Monday had denied any allegations of lathicharge or use of abusive language from their end, and said, 12 protestors were detained and released later.

An FIR had been registered under relevant sections of Indian Penal Code for Covid violations, rioting and damage to public property among others, police had said on late Monday night.