The trains will operate in batches of four-hour each from 7-11 am in the morning and 4-8 pm in the evening, officials said. 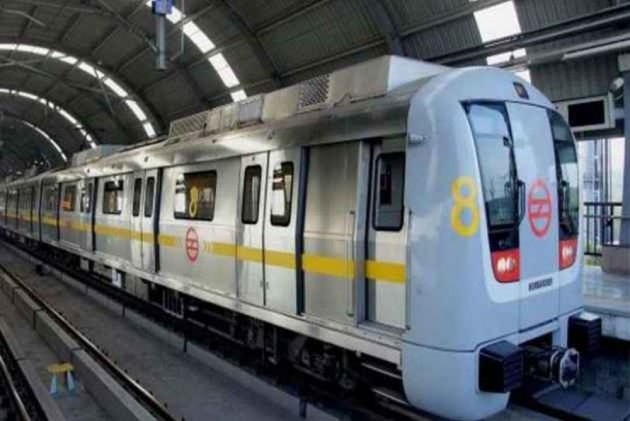 The Delhi Metro resumed services with curtailed operations on the Yellow Line on Monday after being closed for over five months due to the COVID-19 pandemic, as both the DMRC and the commuters trod with caution amid the new normal in the rapid transport system.

The trains will operate in batches of four-hour each from 7-11 am in the morning and 4-8 pm in the evening, officials said.

"We are on our way. It's been 169 days since we've seen you! Travel responsibly and commute if it's only necessary. #MetroBackOnTrack," the DMRC tweeted and posted a video clip of the first train leaving HUDA City Centre

No stations on the Yellow Line were closed as none is in proximity to any containment zone, the official said.

As the day began, some riders wearing protective masks were seen entering the premises of key stations like Kashmere Gate and Hauz Khas on the Yellow Line, which connects Samyapur Badli in Delhi to HUDA City Centre in Gurgaon.

"A few happy faces from our first journey after more than 5 months. #MetroBackOnTrack," the DMRC said in another tweet and posted pictures of some commuters wearing masks inside train coaches.

On the station premises, passengers were permitted to enter the concourse only after temperature checks with thermal guns and sanitisation of hands.

The Home Ministry had recently issued guidelines allowing metro services in the country to resume operations in a graded manner, following which the Delhi Metro Rail Corporation (DMRC) had said it would be done in three stages from September 7-12.

Under stage one, Yellow Line or Line 2 and Rapid Metro were made operational with restricted service hours, a DMRC official said.

Metro services in the National Capital Region were closed since March 22 due to the pandemic.

The DMRC has appealed to people to use the rapid transport only if urgently needed.

Wearing of masks inside train coaches and station premises is mandatory, and those found violating the guidelines would be fined by authorities.

The metro services resumed a day after Delhi registered 3,256 new coronavirus cases, the highest single-day spike in 72 days, taking the tally to over 1.91 lakh.

Commuters are returning to the Delhi Metro stations and coaches after a huge gap of 169 days, with COVID-19 completely changing the paradigm of operations.

Use of Aarogya Setu App by commuters is advisable, the DMRC has said.

In keeping with the new normal, the Delhi Metro has taken a slew of measures to ensure least physical contact for riders, like automated thermal screening-cum-sanitiser dispenser and lift-calling system driven by a foot pedal at several stations.

Special posters have been put up inside coaches and on station premises to raise awareness, besides regular announcements on safety norms.

The DMRC had also appealed to commuters on Sunday to "talk less inside trains to prevent the possibility of short-range aerosol transmission".

Officials of the urban transporter had earlier cautioned that "trains may not stop at some of the stations" if social-distancing norms were not adhered to by passengers.

"This is a new normal and an evolving scenario, so we will anyway be assessing the situation as we go along," an official said.

The DMRC has 10 lines spanning 242 stations, and 264 stations, including the Rapid Metro in Gurgaon.

"Trains will be available with a headway (frequency) varying from 2'44" to 5'28" (at different stretches) with 57 trains performing around 462 trips. The same will be further extended in a graded manner from September 9-12 along with other lines," it said on Sunday.

Over a period of next five days, rest of the lines will also be made operational with all safety measures, officials said.

In lifts, only three people at maximum can ride at a time. The stoppage duration of trains at a station has been increased from 10-15 seconds to 20-25 seconds, and at interchange facilities, from 35-40 seconds to 55-60 seconds.

"Commuters showing COVID-like symptoms will not be allowed to travel and they will be directed to the nearest heathcare facility," the official said.

Inside stations, entries to which have been heavily curtailed, the CISF staff performed "contactless frisking" and red lines drawn at a gap of 1 ft near automated fare collection gates and on the concourse.

Only smart card users were allowed to travel, which can be recharged digitally without any human interface, the official said, adding tokens were not to be issued as per the plan.

Recharge or purchase of smart cards at ticket vending machines or customer care centre will be through cashless mode only, the official said.

On regular days, the average daily ridership of the Delhi Metro is over 26 lakhs.