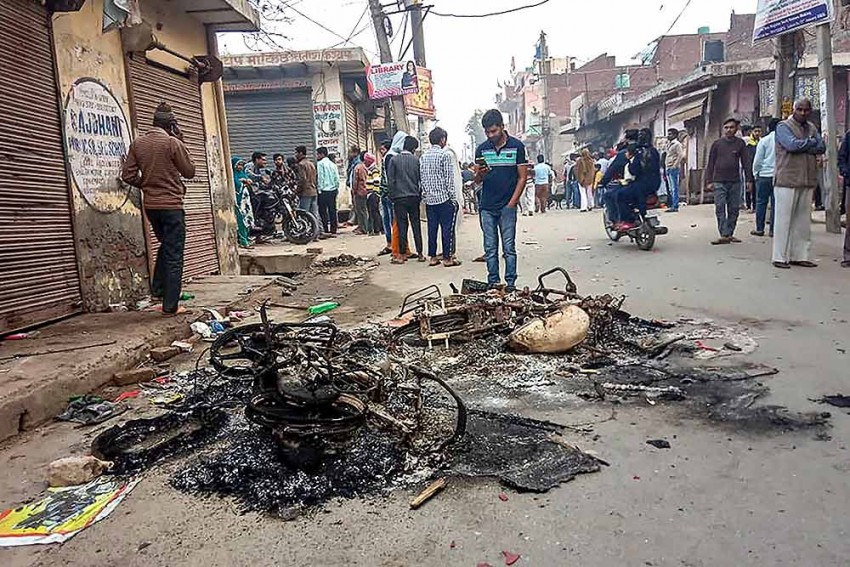 The Delhi Minority Commission demanded on Tuesday more police force be deployed and curfew imposed in the violence-hit areas of Delhi including Maujpur, Karawal Nagar, Seelampur, Babarpur, Ghonda, Mustafabad, Gokalpuri, Jafrabad and Ashok Nagar. It also asked the Delhi Police to escort people whoever wants to move out of the areas. (Catch live updates on Delhi violence here)

Zafarul-Islam Khan, chairman of the commission, said, “I want the Lieutenant Governor of Delhi Anil Baijal to impose curfew as soon as possible.”

He also asked the DCP (North-East) to file an action taken report and reply on a number of issues including the ultimatum issued by BJP leader Kapil Mishra to police to remove anti-CAA protesters blocking roads in Northeast Delhi within three days.

Khan’s letter to LG said that as the constitutional head of Delhi Administration, he should order Delhi Police to rush more forces to the areas and arrest the rioters.

Outlook spoke to local residents and officer-bearers of resident welfare associations who said that police was completely ill-equipped to face the armed mob.

“Anti-social elements are carrying pistols, guns, swords and all sorts of things. Local police don’t seem to be able to control these elements. If curfew will not be imposed immediately, the situation will soon spiral out of control,” Juned Khan, a resident of Seelampur, said.

“For past two days I am visiting the neighbouring areas and I have seen police being completely helpless and surrendering to the mob,” Juned said, adding that a violent crowd tried to enter the Seelampur area around 4 pm today but failed due to resistance from the local residents.

Another resident, Liyaqat, from violent–hit Mustafabad area said that he was followed by a mob Monday afternoon when he ran for his life.

“Police is a mute spectator. They are easily outnumbered by goons. We need 500 plus para-military forces in each area to maintain calm,” Liyaqat said.

Owais Sultan, an activist present in the violence-hit areas, said, “Flag march has been carried out but it doesn’t look effective. I plead to the government to impose curfew and arrest the miscreants.”