Over 50 Jamia students have reportedly been detained by the police and have been taken to Kalkaji Police station. 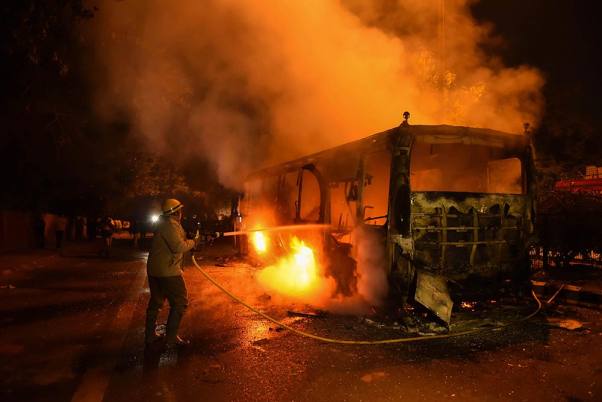 Police used batons and teargas shells to disperse the violent mob and entered the Jamia university campus, where tension prevailed as several persons were detained for alleged involved in the violence. At least 60 people, including students, cops and fire fighters were injured in the violence.

Reports said at leats 51 injured were taken to a nearby hospital for treatment.

Father George PA, director of Holy Family Hospital, said, “We received university students and also police personnel. Most of them have been discharged now."

He said three-four persons, including two police personnel, were admitted to the hospital.

"They have got injuries on head, maybe due to stone-pelting. None of them are critical. We are taking care of them," he said.

However, students of Jamia Millia Islamia, who were also protesting against the Citizenship Law near the campus said, they were not part of the violent agitations and that it was done by outsiders. They maintained that they were protesting peacefully.

Distancing itself from the violence, Jamia student community issued a statement saying: "We have time and again maintained that our protests are peaceful and non-violent. We condemn any party involved in violence."

They asserted that the violence was not done by Jamia students but outsiders who are "attempting to vilify and discredit the genuine protest."

The students alleged that Delhi police entered inside the central library and fired tear gas shells and broke window panels. Some students also claimed that several university students including females were trapped inside washrooms and library rooms due to the violent atmosphere that ensued there onwards.

Soon after the violence, Jamia Millia Islamia Chief Proctor Waseem Ahmed Khan claimed that the Delhi Police entered the campus forcibly without any permission and beat up staff members and students who were forced to leave the campus.

Condemning the police action, university vice chancellor Najma Akhtar said students who were inside the library, where the police allegedly entered, have been taken out and are safe.

Police, however, said they entered the university campus only to control the situation, after some of the protesters indulged in the violence.

Delhi Chief Minister Arvind Kejriwal issued a statement saying that "real miscreants who caused violence should be identified and punished."

"I spoke to Lieutenant Governor and urged him to take all steps to restore normalcy and peace. We are also doing everything possible at our end," he assured.

Later in the evening, students of Jawaharlal Nehru University held a protest outside the Police Headquarters in central Delhi against the police action at Jamia university and the standoff continued till late in the night.

Commuters faced a harrowing time as traffic was thrown out of gear for several hours in the areas and Delhi Metro shut over a dozen stations.

The protest was being held against the contentious Citizenship Law which seeks to provide citizenship to non-Muslims religious minorities from three neighbouring countries who arrived in India to escape religious persecution.