Sharjeel Imam was arrested for allegedly making inflammatory speeches at the Jamia and in Aligarh. 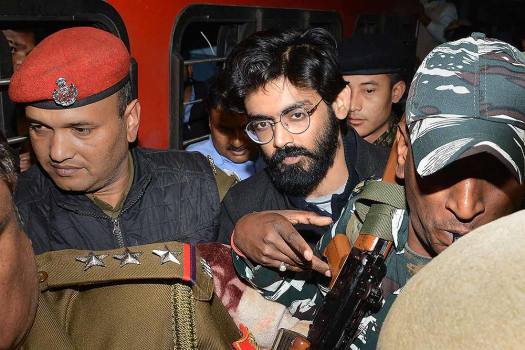 Imam was arrested from Bihar's Jehanabad on January 28 for allegedly making inflammatory speeches at the Jamia Millia Islamia in Delhi and in Aligarh.

Imam, a PhD student at the Jawaharlal Nehru University's Centre for Historical Studies, was booked in sedition cases lodged across several states for alleged "inflammatory" speeches made during protests against the Citizenship (Amendment) Act.

"He was arrested in two cases of violence at Jamia on December 13 and 15, 2019, for instigating and abetting the Jamia riots, due to his seditious speech on December 13 and based on evidences collected, IPC sections 124 A and 153 A were also invoked," said Anil Mittal, Additional PRO, Delhi Police.

A supplementary chargesheet was filed in Saket court against Imam for giving 'seditious speech' and 'abetting riots' in Jamia on December 15 last year, the Delhi Police had said on April 18.

Imam's lawyer Ahmad Ibrahim had earlier said that appropriate measures will be taken after going through the charge-sheet.

Earlier, former JNU student Umar Khalid and Jamia Millia Islamia students Meeran Haider and Safoora Zagar were also booked under the UAPA for allegedly hatching a conspiracy to incite the communal riots in the national capital. While Zargar is the media coordinator of Jamia Coordination Committee, Haider is a member of the committee.

In the FIR, police have claimed that the communal violence was a "premeditated conspiracy" which was allegedly hatched by former JNU student leader Umar Khalid and two others.

Communal violence had broken out in northeast Delhi on February 24 after clashes between citizenship law supporters and protesters spiralled, leaving at least 53 people dead and around 200 injured.

On Monday, a Delhi court sent Jamia Millia Islamia Alumni Association President Shifa Ul Rahman to 10-day custody of Delhi Police Special Cell, with police claiming that "anti-CAA protests at the varsity and other parts of Delhi were funded from the Middle East".

The police told the court that Shifa-Ur-Rehman, also a member of Jamia Coordination Committee, was involved in a criminal conspiracy along with former Umar Khalid.