AAP's decision comes after party meeting held by Arvind Kejriwal soon after polling was over. 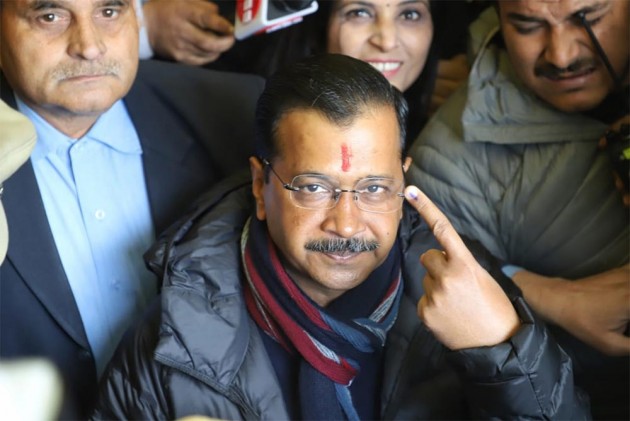 The Aam Aadmi Party (AAP) on Saturday said it would deploy its volunteers outside the 30 strong rooms where EVMs have been kept, a move aimed at keeping a tight vigil on the machines till the counting day which is on Tuesday.

According to an AAP functionary, Chief Minister Arvind Kejriwal held a meeting with senior party leaders, including Sanjay Singh and Manish Sisodia, and political strategist Prashant Kishor at his residence on Saturday night.

Later, Singh said party volunteers will maintain vigil and camp outside strong rooms across the national capital. He said there were 30 strong rooms where EVMs have been kept and the party would deploy its teams of volunteers outside those.

"We also heard that some officer had EVM machine illegally in Babarpur. We will complain to the Election Commission," Singh, a Rajya Sabha MP, said.

The voting for Delhi assembly elections was held on Saturday and the counting of votes will take place on February 11.

Exit polls predicted a big victory for Chief Minister Arvind Kejriwal-led AAP with some indicating that it can even repeat its 2015 landslide when it had bagged 67 seats in the 70-member House.

The India Today-Axis poll forecast 59-68 seats for the AAP and 2-11 for the BJP, while the ABP-CVoter put the Delhi's ruling party's tally at anywhere between 49 and 63 and that of its main rival between five to 19.

Almost all exit polls predicted little change in the fortunes of the Congress, which had ruled the city between 1998 and 2013 but drew a blank in the 2015 polls.

The Times Now-Ipsos exit poll predicted that Kejriwal will retain power with the AAP winning 47 seats against 23 for the BJP.

The AAP had scored an overwhelming victory in the 2015 polls, winning 67 seats and reducing the BJP to three. Congress had drawn a blank.