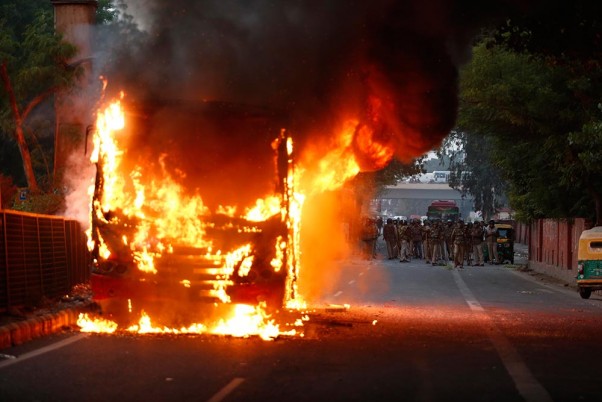 Unrest over the police crackdown in Delhi's Jamia Miiia Islamia and the controversial Citizenship Amendment Act (CAA) rippled in angry waves through the country on Monday with demonstrations in several campuses, including in Hyderabad, Lucknow and Mumbai, Chennai and Delhi.

The morning after violence broke out in the national capital, thousands of students across India took to the streets demanding a probe into the use of teargas inside the Jamia library as well as police entering the campus without permission from university authorities.

There was heavy police presence in university campuses.

Police used tear gas shells and also fired in the air to control the situation. Additional Chief Secretary (Home) Awanish Awasthi said senior officials are on the spot.  "The mob has been dispersed. Section 144 of CrPC is already implemented in the district," he said.

6:19pm: Citizenship amendment law is against India's Constitution. It is to destroy our Constitution, says Priyanka Gandhi

5:50pm:   Police detained  around 50 people, including students and faculty members, who gathered outside the Indian Institute of Management Ahmedabad (IIMA) to protest against police action on Jamia Millia students.

5:35pm: All trains between Kolkata and north Bengal, Northeast suspended in view of anti-citizenship law protests

5:32pm: We should not indulge in any activity which is not in national interest: HRD Minister Ramesh Pokhriyal to students

4:35pm: Some parties are trying to instigate students, using them as pawn to further their petty political interests, says BJP 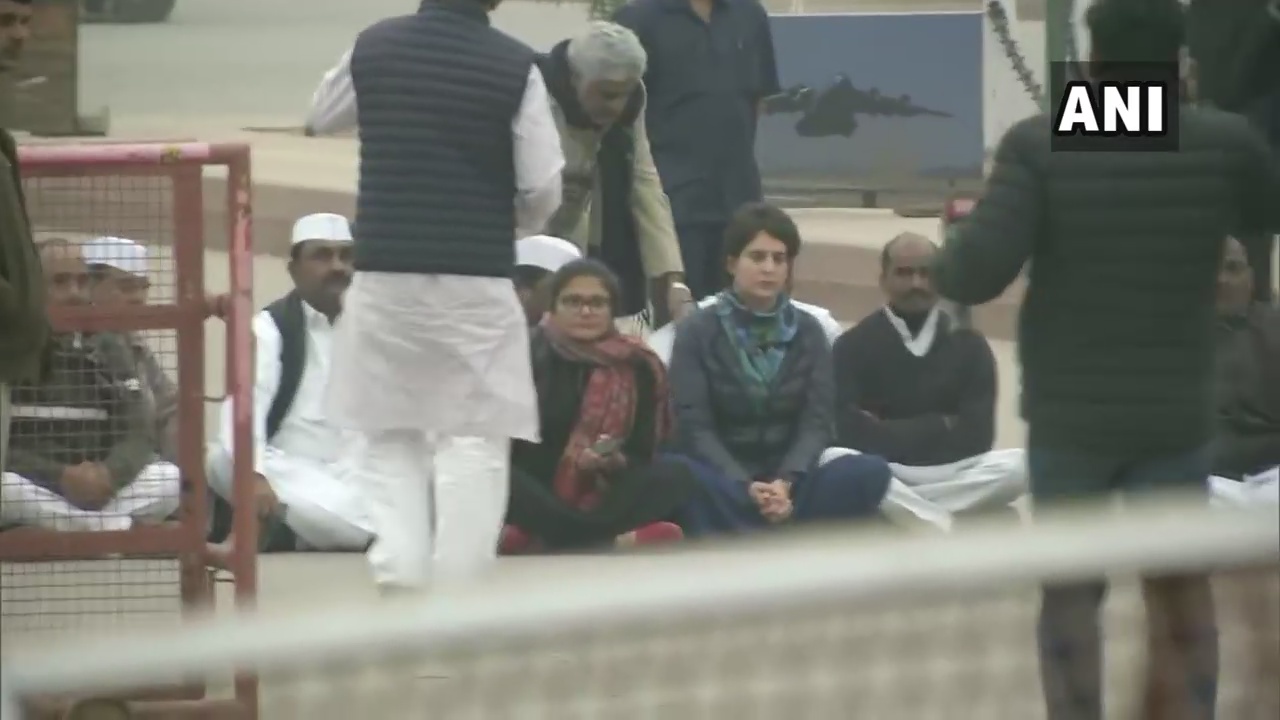 3:24pm: Govt has attacked the Constitution and students, they attacked students after entering the university. We will fight for the constitution, we will fight against this government, says Congress general secretary Priyanka Gandhi Vadra

3:00pm: There was no firing, no casualties in Jamia violence: MS Randhawa

2:58pm: Around 30 police personnel injured, 2 SHO suffered fractures, one of our personnel is in ICU. 2 FIRs have been registered for rioting and arsoning. Crime Branch will investigate the matter from all angles, says MS Randhawa

2:57pm: I appeal to everyone, especially students, to not believe in rumours. Action will be taken against whoever is involved in this incident, says MS Randhawa

2:50pm: West Bengal chief minister Mamata Banerjee, speaking at a protest rally in Kolkata, said won't let the NRC be implemented in her state.  "Only BJP will remain here and everyone else will be made to leave; that's their politics. It'll never happen. India is everyone's. Agar sabka sath nahi rahega toh sabka vikas kaise hoga? Who is the #CitizenshipAct for? We're all citizens. Didn't you cast vote? Don't you live here?

2:23pm: Internet services suspended in Assam for another 24 hours, till Tuesday

Violent protests on the Citizenship Amendment Act are unfortunate and deeply distressing.

Debate, discussion and dissent are essential parts of democracy but, never has damage to public property and disturbance of normal life been a part of our ethos.

The need of the hour is for all of us to work together for the development of India and the empowerment of every Indian, especially the poor, downtrodden and marginalised.

We cannot allow vested interest groups to divide us and create disturbance.

1:54pm: It's an attack on our democracy and Constitution, says Sitaram Yechury

Students of IIT Madras announced a rally and protest gathering at the Gajendra Circle on the campus. Students of IIT Bombay had protested on Sunday night after the crackdown at the two universities.

1;39pm: Finance Minister Nirmala Sitharamansaid that citizens should be wary of “jihadists, Maoists and separatists” getting into student activism. Sitharaman, however, said that she was not aware of the events at New Delhi’s Jamia Milia Islamia University over the weekend.

1:04 pm: Jamia V-C says they have a list of 200 students injured during Sunday's violence.

12:58 pm: "Jamia has been a peaceful university. If protests happen around Jamia area, that should not be related to the Jamia university," says Najma Akhtar, adding that Jamia should not be targetted for its name.

12:57 pm: There has been huge damage to the university property, says Jamia Milia Islamia Vice-Chancellor, adding that they will present facts to the HRD Ministry.

12:56 pm: We cannot tolerate police presence on campus, they scared our students with their brutality, says Jamia VC.

12:52 pm: "We will FIR against the damage of properties. But there is no way to repair mental trauma of students," says Jamia Millia VC Najma Akhtar.

12:34 pm: Police said 25-30 per cent AMU hostels have been vacated and the rest are expected to be vacated by evening.

11:40 am: Students of the city-based Maulana Azad National Urdu University on Monday boycotted their exams and held protests against the police action on their counterparts in Jamia University in Delhi.

11:21 am: Violent protests erupt in Nadwa College in Lucknow. Students hurl stones at police who have installed barricades outside the college gate.

10:52 am: Chief Justice of India, S.A.Bobde, to hear plea on violence against students on Tuesday.

10:51 am: Two cases registered in connection with violence in Jamia Millia Islamia on Sunday: Delhi Police.

10:35 am: A group of Jamia Millia students stood shirtless in the bone-chilling cold outside the university gates on Monday to protest against the police action against their colleagues a day earlier.

Slogans of "inquilab zindabad" rent the air as the group of around 10 students, accompanied by their fellow colleagues, took out a small march.

10:32 am: Kerala Chief Minister Pinarayi Vijayan and Leader of Opposition in the state assembly, Ramesh Chennithala began a joint "satyagraha" on Monday to protest against the controversial Citizenship (Amendment) Act.

State ministers, LDF leaders, Congress-led United Democratic Front (UDF) leaders are among those taking part in the three-hour long protest at the Martyr's column which
began at 10 am.

10:21 am: A case has been filed against the Delhi Police at the National Human Rights Commission for its action at the Jamia Millia Islamia. Complainant Saurabh Das has alleged that "on the night of December 15, the Delhi Police under the command of Deputy Commissioner of Police-South East" had "brutally assaulted" students of the varsity.

9:52 am: The situation in Jamia Millia Islamia remained tense on Monday morning and many students decided to leave for their homes.

9:13 am: Protests over the amended Citizenship Act continued in Bengal for the fourth consecutive day on Monday, with incidents of road and rail blockades reported from various parts of the state, officials said. In East Midnapore and Murshidabad districts, the agitators blocked thoroughfares since morning, inconveniencing hundreds of commuters, they said.

9:01 am:  A day after violent protests in southeast Delhi against the new citizenship law, traffic movement was closed from Sarita Vihar to Kalindi Kunj on Monday morning as part of precautionary measure, police said.

8:34 am: The entry and exit gates of all metro stations were opened and services had resumed at all stations, the DMRC said on Monday. The Delhi Metro Rail corporation (DMRC) closed the gates of around 13 metro stations on Sunday evening, following advice from police.

8:04 am: The students of Mumbai's Tata Institute of Social Sciences have decided to boycott today's classes and fieldwork in solidarity with Jamia Milia Islamia and AMU students.

7:41 am: Aligarh Muslim University Registrar Abdul Hamid said the police entered the campus late Sunday night and clashes were reported from inside. "Hostels are being evacuated," he said.

7:38 am:  Protest erupted on the campus of Moulana Azad National Urdu University (MANUU), here on Sunday night, against the police 'brutality' on students of the Jamia Millia Islamia University and the Aligarh Muslim University.

7:35 am: As many as 50 students, who were detained during protests at the Jamia Millia University on Sunday, were released in the early hours of Monday, police said.

Of the 50 students, 35 were released from the Kalkaji police station and 15 from the New Friends Colony police station, a senior police officer said.

7:33 am: The Delhi Minority Commission (DMC) issued a direction to the SHO of Kalkaji Police Station on Sunday night to release the "injured" students of Jamila Millia University held there or take them for treatment at a reputed hospital without any delay.

12:30am: Congress blamed the BJP government for the police action in Jamia varsity campus. "From the North East to Assam, West Bengal and now in Delhi. The BJP government has failed in its duty to maintain peace in the nation. They must take responsibility and restore peace in our country," the Congress said on its official Twitter handle.

Najma Akhtar, VC of Jamia Millia Islamia: Police couldn't differentiate between the protesters and students sitting in the library. Many students and staff were injured. There was so much ruckus that Police couldn't take permission. I hope for peace and safety of our students. https://t.co/ffAJ5E3D1w

10:46pm: West Bengal Chief Minister Mamata Banerjee held an emergency meeting with senior officers of the state administration and police forces and directed them to remain on high alert, amid incidents of violence in the state.

10:30pm:  The Aligarh Muslim University administration Sunday night announced that the institution will remain closed till January 5. "The university is closed from today (15/12/2019) till 05/01/2019. This is being done due to disturbances created by some anti-social elements for last three days," AMU Registrar Abdul Hamid said.

9:59pm:  After the clashes, at least 35 injured people were taken to Holy Family Hospital in Okhla. Eleven of them, the sources said, have been admitted, news agency PTI reported.

Explaining why the police entered the Jamia Millia University campus, he said, "The campus is not unified, it is located on both sides of the road, and while we were pushing the mob back, they were going inside the University and then were throwing stones from inside, so we were checking those places."

9:15 PM: After the situation escalated at Jamia Millia, Students belonging to different universities in Delhi have planned a protest tonight against the police at ITO.

9:00 PM: Students who were inside the central library have been taken out and are safe; police action os condemnable,  Jamia VC Najma Akhtar tells PTI.

Jamia Millia Islamia Chief Proctor Waseem Ahmed Khan claimed that Delhi Police personnel entered the university by force without any permission and beat up staff members and students who were forced to leave the campus.