The new infections, which took the national capital's tally to 4,38,529, came out of 50,754 tests conducted the previous day 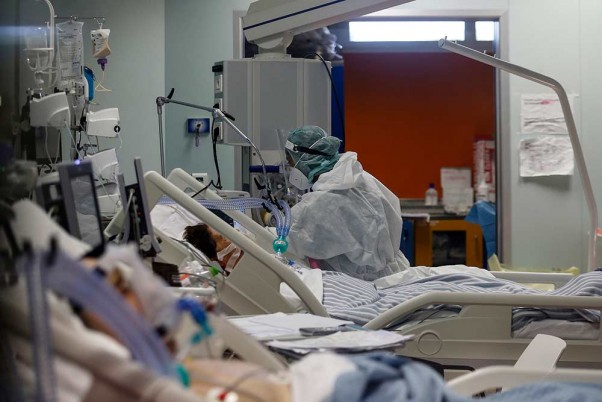 Delhi recorded its biggest single-day jump of 7,745 coronavirus cases on Sunday, with the positivity rate increasing to 15.26 per cent amid the festive season and rising pollution, the health department said.

The new infections, which took the national capital's tally to 4,38,529, came out of 50,754 tests conducted the previous day, according to a health bulletin.

There are 41,857 active cases in the city, the bulletin said.

Seventy-seven more fatalities took the death toll to 6,989, it said.

On Saturday, Delhi had reported 79 deaths, the highest in over four months.

On Friday, over 7,000 COVID-19 cases were recorded in the city for the first time, while the recovery rate was over 89 per cent.

The number of Rapid Antigen Tests conducted on Sunday stood at 34,772 and RT-PCR, CBNAAT and True NAAT test figures were 15,982 in all, totalling 50,754, the bulletin stated.

The number of containment zones in Delhi increased from 3,857 on Saturday to 3,878 on Sunday.

The sudden spike in cases comes amid the festive season and rising pollution level. While Durga Puja celebrations ended on October 25, Diwali and Chhath Puja will be celebrated on November 14 and 20 respectively.

Earlier in the day, Delhi Health Minister Satyendar Jain said the national capital has hit the peak of the third wave of COVID-19 and the number of cases suggests it has been the worst so far.

The government has increased the number of beds for COVID-19 patients in city hospitals but there is no plan to rope in hotels and banquet halls, he said.

The minister attributed the increase in the number of cases to aggressive testing and contact tracing.

He, however, said laxity on the part of the people has been a major reason behind the spike in new cases.

The National Centre for Disease Control, in a report drafted recently, had warned that Delhi needs to be prepared for about 15,000 fresh COVID-19 cases daily taking into account the upcoming winter season, related respiratory problems, large influx of patients from outside and festive gatherings.

It said 527 beds in COVID care centres are occupied by people under quarantine including travellers who have returned as part of the Vande Bharat Mission and via bubble flights.

The Delhi government has significantly ramped up testing in the last few days, with the count crossing the 60,000-mark several times.

The bulletin said 3,89,683 patients have recovered, been discharged or migrated so far.