While rejecting the bail plea of Sirajuddin, the court said there is a possibility the accused may threaten or intimidate the witnesses, if released on bail. 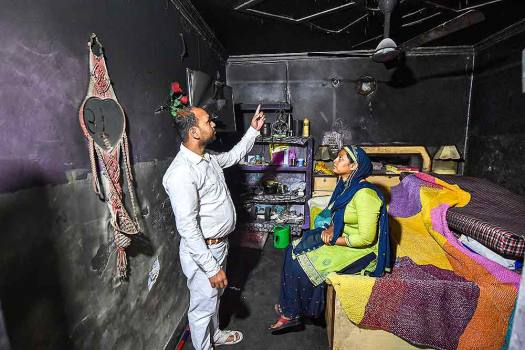 The Karkardooma court has refused to grant bail to murder accused Sirajuddin on the grounds that he might threaten the witnesses who allegedly saw him being part of a 'riotous mob' that killed Rahul Solanki in Northeast Delhi during February 2020 communal violence.

Solanki, a college student, received bullet injuries during communal riots on February 24 when he came out of his house to buy milk and groceries in Northeast Delhi. Sirajuddin is one of the seven accused in Solanki’s murder case.

“Public witnesses in the matter are residents of the same locality and the possibility of the applicant threatening or intimidating them, if released on bail at this stage, cannot be ruled out,” Vinod Yadav, Additional Sessions Judge, said while dismissing the bail application.

Sirajuddin was arrested on March 29 and since then he has been in Tihar Jail. His lawyer Manish Kumar Singh alleged that he has been falsely implicated and the police filed an FIR after almost four days of the incident.

The police‘s daily diary record shows that it received information at 11:15 AM on February 24 about Rahul Solanki’s death. However, the police registered an FIR at 1:20 PM on February 28.

Singh also questioned the presence of the accused in the CCTV footage with a thick stick.

According to Singh, Sirajuddin lives two streets away from the place where he has been captured on CCTV camera as he had come down from his house at around 4:00 PM to bring some grocery.

“He suddenly noticed a crowd of about 100-200 people of another community shouting abuses, hurling stones, having sticks, rods and bricks in their hands approaching towards his house,” Singh argued as recorded in the order.

Singh further said that sensing danger to his life and in order to save himself from the riotous mob, Sirajuddin picked up a “thin stick” from the street and ran towards the gali (street) in which he was captured by the CCTV camera.

Calling him a “passive bystander”, Singh argued, “The reliance upon the CCTV footage in the matter is of no consequences against the applicant, as he is not seen committing assault/firing upon the deceased.”

He also highlighted anomalies in the various police records about the place of incident. While the police DD entry records the scene of the crime to be “Shiv Vihar Tiraha”, the medical report of Solanki mentions the place of incident as “C-Vihar”. Another police document shows it in Mahalaxmi Enclave.

He also said that since the investigation in the matter is complete and the chargesheet already filed, “no useful purpose would be served by keeping him behind bars in the matter, as the trial of the case is likely to take a long time.”

However, Amit Prasad, Special Public Prosecutor, strongly opposed the bail saying that the death of Rahul Solanki by the “riotous mob” was merely on account of the fact that he belonged to a different community.

“During investigation, it has emerged that there was a 'deep-rooted conspiracy' which triggered communal riots in Delhi,” Prasad argued as recorded in the court order.

He further argued that the accused has been “clearly captured in the CCTV footage carrying a laathi (stick) in his hands near the scene of crime on the date of incident, being part of the “riotous mob” and he was actively involved in the rioting.”

Prasad referred to the portion of the CCTV footage which was played in the court and emphasised the demeanour of the accused as he was “seen exhorting the other rioters with a “stick” in his hand” with an “aggressive” body language.

Prasad told the court about the reasons for the anomalies in the various records about the place of incident. He apprised the court of the fact that at the time of interrogation the accused “has furnished false mobile numbers to the investigating agency, which shows the ‘conduct of a guilty mind’.”

While pleading to dismiss the bail application, Prasad said that though the chargesheet in the matter has been filed, the further investigation in the matter is on with regard to “conspiracy angle” as well as “identification of other persons of unlawful assembly”, who had participated in the riots.

The court, after hearing both parties and examining reports, chargesheet and the relent CCTV footage, said, “...it is prima facie apparent that the applicant was part of the “riotous mob”, which had caused vandalism, arson and loot in the area and due to firing from the said mob, deceased Rahul Solanki got hit and later on died.”

“The applicant is clearly visible in the CCTV footage, carrying a laathi/stick in his hands, thus prima facie indicating he being part of the riotous mob that had fired upon deceased Rahul Solanki,” the judged said and dismissed bail plea.