'I felt that I am almost dead when the doctor inserted his fingers in my wound and extracted the bullet without giving any local anaesthesia as it was out of stock,' recalls riots victim Ali. 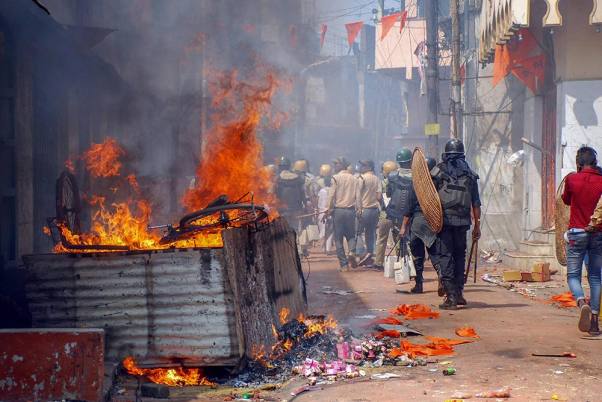 42-year old Shaukat Ali has requested the Delhi government to enhance his compensation from Rs 20,000 to Rs 2 lakh, an amount it promised to pay to every seriously injured person in the communal riots in North-East Delhi.

He claims that he has received only Rs 20,000 because the sub-divisional magistrate at Yamuna Vihar termed his rifle bullet injury as a minor one.

Ali is a sole earning member in the family of six; his wife, three kids and his parents.

A resident of Babu Nagar in old Mustafabad area, Ali had come out of his house on February 25 evening to buy some household stuff. The moment he headed towards the market, he heard a commotion at some distance and by the time he would have reacted, a rifle bullet hit in his left thigh. He fell on the road and went unconscious.

“I don’t know what happened after that but when I became conscious, I found myself in a bed in Al-Hind hospital,” Ali said adding that doctors advised him to shift to a bigger hospital as his injury was life-threatening.

It provided an ambulance at 12:30 am on February 26 and with the help of police, he was admitted in Lok Nayak Jai Prakash (LNJP) Hospital at the Delhi Gate.

He went through an excruciating pain all this while. “I felt that I am almost dead when the doctor inserted his two fingers in my wound and extracted the bullet without giving any local anaesthesia as it was out of stock,” Ali recollected.

Though he has recovered now, he still cannot give much stress to his left leg as it hurts. At the time of the incident, Ali was a casual worker in a small company which manufactured grass cooling pads of air coolers.

The injury forced him to leave the job and sit at home. “When the lockdown happened, I thought I might now be able to survive. But I am thankful to the almighty that help came from some quarters,” Ali said.

He added, “I was aware that I couldn’t work in a labour-intensive area. My relatives helped me get a job in Hyderabad so I left my family in Delhi and went there. But that didn’t work out for very long.”

Now he has moved to Hoshiarpur in Punjab where he has got a job in a private company. “Due to my physical constraints, companies offer me half the salary that I used to get before my injury. But what option do I have?” Ali asked.