Along with Yadav, student leader Kawalpreet Kaur and advocate DS Bindra also found a mention in the chargesheet. 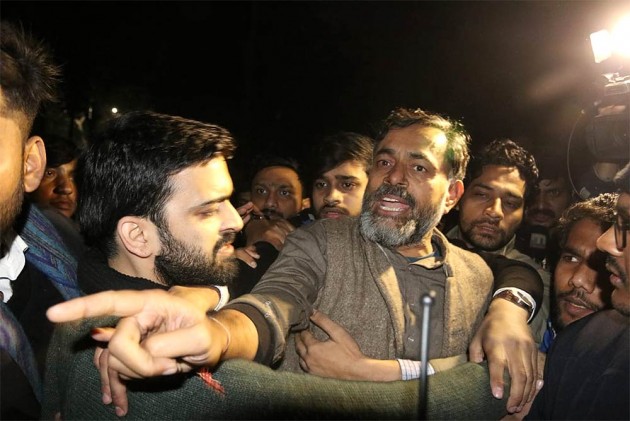 Delhi Police has named Swaraj India President Yogendra Yadav in a chargesheet in the murder of head constable Rattan Lal during the Northeast Delhi Riots in February, Indian Express reported. Along with Yadav, student leader Kawalpreet Kaur and advocate DS Bindra also found a mention in the chargesheet.

The three have not been named in the list of 17 accused, but the chargesheet says that the "links of the organisers of the (Chand Bagh) protest site with the likes of D S Bindra (AIMIM), Kawalpreet Kaur (AISA), Devangana Kalita (Pinjra Tod), Safoora, Yogendra Yadav, etc itself indicates a hidden agenda behind the violence", the Indian Express reported.

As per police, protests in Chand Bagh had been going on since January.

Riots broke out in Northeast Delhi on February 24. "Serious communal riots took place in Northeast Delhi, in which more than 750 cases were registered, 53 persons lost their lives, including head constable Rattan Lal of the Delhi Police," the chargsheet says.

"“Lal, along with ACP (Gokalpuri) and DCP (Shahdara) and some other police officials, was present closest to the protest site at Chand Bagh. Apparently, during the attack by mob, he could not jump over the five-feet-tall divider on the Wazirabad road, and collapsed after being shot at and hit by stones,” the chargesheet states further.

All 17 accused in Lal's murder are between the age of 18 and 50 years. While most of them are from Chand Bagh, some live in the neighbouring Mustafabad, Jagat Puri and Prem Nagar.

Yadav's name also features in the chargsheet in a statement by a witness from the protest site. "Protest started here. People from outside were called and advocate Bhanu Pratap, Bindra, Yadav and many students of JNU, Jamia and DU used to come, who used to speak against the government and NRC and would say that Muslims should be anxious. This continued from January to February 24, for 50 days".

Speaking to Indian Express, Yadav said, "Everything that I spoke is in the public domain. Please point out one instance where I have directly or indirectly incited violence of any kind."