Delhi Sees Another Record In Covid -19 Cases With Over 5,700 Fresh Cases

With 27 new fatalities, the death toll in the national capital reached 6,423, 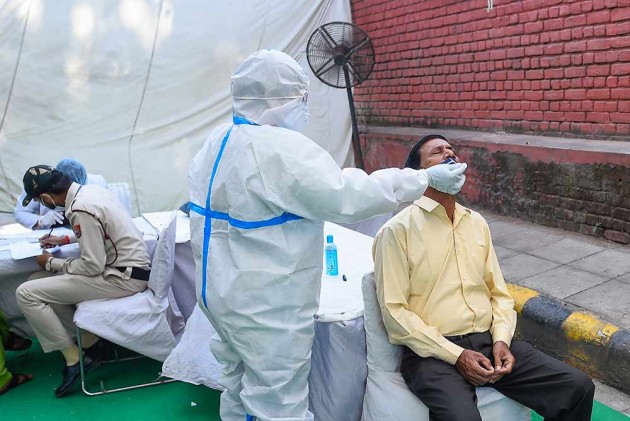 The national capital on Thursday recorded over 5,700 fresh Covid-19 cases, the highest single-day spike to date, even as the Delhi government cited its new strategy involving aggressive contact tracing and testing as one of the reasons for a sudden surge in the number of infections in the city.

The Union health ministry, however, said social gatherings during festivities, deteriorating air quality, increasing incidences of respiratory disorders are among a few reasons attributed to the rise in Covid-19 cases in Delhi.

Amid the festive season and rising pollution levels, this is the second consecutive day when over 5,000 cases have been reported in a day in the city. The previous highest single-day spike of 5,673 cases was recorded on Wednesday.

Twenty-seven new fatalities were recorded, pushing the death toll in the national capital to 6,423, according to the latest bulletin issued by the Delhi health department.

Earlier in the day, Delhi health minister Satyendar Jain said that the AAP government has changed its anti-corona strategy by conducting aggressive tracing and testing in the city, citing it as one of the reasons for a sudden spike in Covid-19 cases in the past few days.

Jain said that this may be the third wave but it's too early to say that conclusively. He said one should wait for another week to see the trends before declaring the surge the third wave.

Talking to reporters about the new strategy which, he claimed, will be the "best strategy" to contain the virus, Jain said the Delhi government has started conducting aggressive tracing and testing of all family members and close contacts of those found infected with the novel coronavirus.

"And, we are at times, testing them twice after a gap of 4-5 days. We don't want to leave any positive case...we have changed our strategy that's why the number of cases has gone up. I believe that this strategy would be successful," Jain said.

Meanwhile, a review meeting on the status of the infection in Delhi, West Bengal and Kerala was held by Union health secretary Rajesh Bhushan in the presence of V K Paul, member (health), NITI Aayog, and Balram Bhargava, DG, ICMR, according to a statement by the health ministry.

"The rising cases were attributed by the Delhi team to social gatherings during the festivities, deteriorating air quality, increasing incidences of respiratory disorders, and clusters of positive cases at workplaces. The fatigue among frontline workers was also discussed," it said.

Interacting with reporters, Jain said that the AAP government's main focus is that not a single (Covid-19) case should be left for testing.

"You can see a rise in number of cases, but it is a good strategy and its results should be seen soon," he said.

On being asked about the figure of 15,000 cases per day projected by experts in the coming months, the Delhi health minister said, "Figures have been projected by experts on surge in daily Covid-19 cases, but it may not reach that level. However, we want to be fully prepared."

On their part, experts pointed out that milling crowd in the festive season, increase in pollution level, and laxity in behaviour by many people in observing Covid-19 safety norms have led to a massive surge in daily cases in the last few days in the national capital.

Medical director of the Delhi government-run LNJP Hospital Suresh Kumar said due to the festive season and reopening of theatres, overcrowding is happening in markets and other public places, which is leading to transmission of the virus.

"Besides, a large number of people are not observing safety norms, like wearing masks, hand hygiene, or social distancing. And then rise in pollution level also makes those who have respiratory illness susceptible to Covid-19 infection too," he told PTI.

"Yet, many people are just roaming around without masks with scant or no regard for safety norms which should be drilled in the psyche of the masses. Also, we just had Durga Puja and other festivals, and more are coming up, and add to it the increased pollution factor. It's a dangerous cocktail," he said.

Asked what factor he considered as the major one, Chatterjee, himself a Covid-19 survivor, said "Complacent behaviour by people, in observing safety norms is really making the matter worse".

People who may be asymptomatic carriers are just transmitting it to others via coming in contact with others and not wearing masks in public, he flagged.

The national capital's overall air quality inched closer to the "severe" category on Thursday morning as pollution levels rose sharply after a marginal reduction, primarily due to calm winds and a spike in farm fires.