No woman was included in the new cabinet despite eight female candidates of AAP winning in Delhi polls. 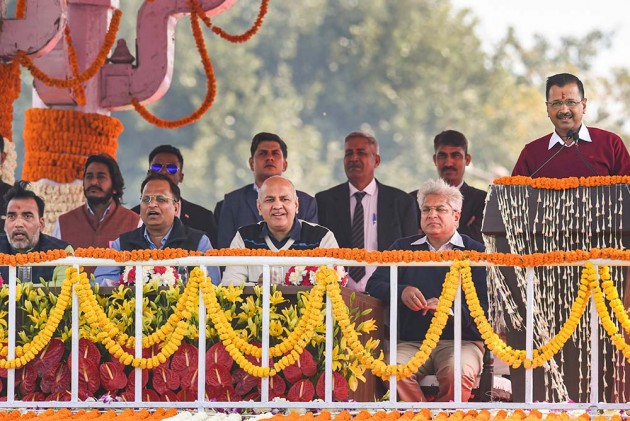 Sisodia has been Kejriwal's deputy since he became the chief minister and he is expected to retain the position. Senior AAP leader Satyendar Jain, who was re-elected as the Shakur Basti MLA in the February 8 polls, served as the health minister in the previous AAP government. He is also likely to retain his portfolio.

Rai was the Labour Minister in the previous government while Gautam held the Social Welfare portfolio in his last tenure.

Others who took oath at the Ramlila Maidan were Rajendra Pal Gautam and Imran Hussain.

No woman leader was included in the new cabinet despite eight female candidates emerging victorious in Delhi polls, where AAP won 62 of 70 seats.

Reacting to the stark lack of female representation, Congress leader Alka Lamba tweeted that Delhi's women department has also been assigned to a male instead of a female in the newly constituted Delhi Assembly.

Lamba, a former AAP member, tweeted: "#Delhi Government's #Women's Ministry is also given to a #Man Minister. My best wishes to the women of Delhi, stay safe, stay healthy. Once again women stand at the doors of men to get their rights. No more free ticket on the bus... ask for confirmed job in DTC."

Kejriwal decided to repeat the entire cabinet of 2015. As in his previous tenure, this time too no woman was sworn in as minister even though deserving candidates were on the line.

Atishi's exclusion comes as a surprise to many as she played a crucial role in revolutionising education and reforming government schools. AAP has praised her incessantly for her efforts.

Preeti Tomar, who is a first-time MLA, replaced her husband from Tri Nagar seat after discrepancies in his candidature and won.

Rakhi Birla was able to organise most Dalit votes from Mangolpuri area for the party. She held a ministerial portfolio in AAP's first term in 2013.

Defending the party's decision, Birla told IANS,"It was already decided that all former ministers will retain their positions in the cabinet. So, my being in the ministry is out of the question. I hold a position of Deputy Speaker which is equally important. There is no need to have a ministerial portfolio to serve Delhi."