A layer of haze lingered over Delhi-NCR at night as people continued bursting firecrackers despite a ban. 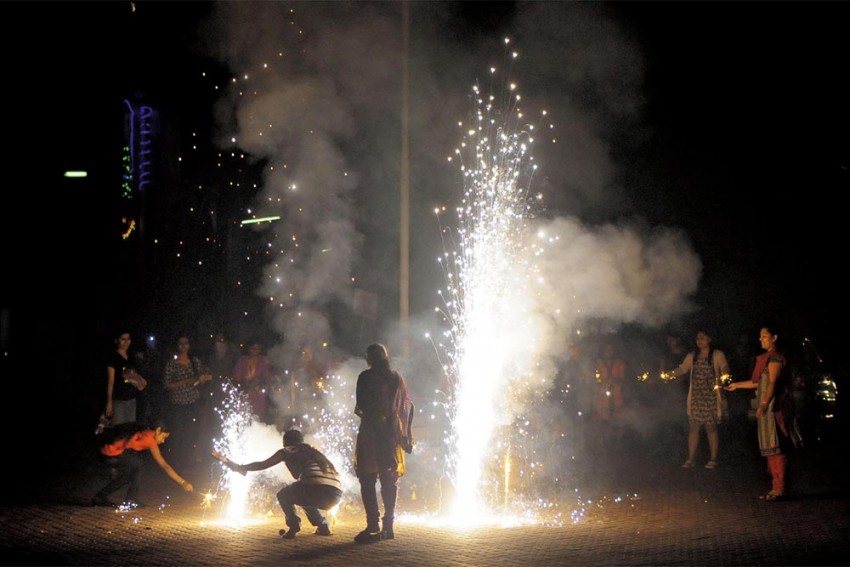 Delhi-NCR woke up to the pungent smell of smoke from firecrackers on a hazy Sunday morning as pollution levels in the region crossed the “emergency” threshold.

Delhi's air quality turned "severe" on Saturday with stubble burning accounting for 32 per cent of Delhi's PM2.5 pollution and firecracker emissions making the situation even worse.

A layer of haze lingered over Delhi-NCR at night as people continued bursting firecrackers despite a ban, and calm winds allowing the accumulation of pollutants.

The Trash We Inhale

The level of PM2.5 – which is about three per cent the diameter of a human hair and can lead to premature deaths from heart and lung diseases – was 331 microgram per cubic metre (µg/m3) in Delhi-NCR at 10 pm, above the emergency threshold of 300 µg/m3.

The PM10 level stood at 494 µg/m3 at 10 pm, precariously close to the emergency threshold of 500 µg/m3, according to the Central Pollution Control Board (CPCB) data. PM10 levels below 100 µg/m3 are considered safe in India.

According to the Graded Response Action Plan (GRAP), the air quality is considered in the "severe-plus" or "emergency" category if PM2.5 and PM10 levels persist above 300 µg/m3 and 500 µg/m3 respectively for more than 48 hours.

Earlier, the Ministry of Earth Sciences' air quality monitor, SAFAR, had said that the PM2.5 concentration in Delhi on Diwali was "likely to be the lowest" of the last four years if no firecrackers are burnt.

However, it had said that even a small increase in local additional emissions is likely to have "a significant deterioration impact on Sunday and Monday".

It said peak levels of PM10 and PM2.5 are expected between 1 am and 6 am in case of additional internal emissions.

Delhi recorded a 24-hour average AQI of 337 on Diwali last year (October 27), and 368 and 400 in the next two days. Thereafter, pollution levels remained in the "severe" category for three days on the trot.

In 2018, the 24-hour average AQI (281) on Diwali was recorded in the "poor" category. It deteriorated to 390 the next day and remained in the "severe" category on three consecutive days thereafter.

This time, the India Meteorological Department has said that a fresh western disturbance is likely to increase the wind speed and improve the air quality in Delhi-NCR post-Diwali.

Light rain is likely on Sunday under the influence of a western disturbance. It is still to be seen if it is enough to wash away pollutants, Kuldeep Srivastava, the head of the IMD's regional forecasting centre, said.

"However, Delhi-NCR's air quality is likely to improve post-Diwali due to an expected increase in the wind speed on Sunday," he said.

V K Soni, the head of the IMD's environment research centre, said the wind speed is expected to pick up thereafter and the wind direction will be east-southeasterly.

There will be a significant improvement in air quality by November 16, Soni said.

The Air Quality Early Warning System for Delhi also said the situation is likely to "improve significantly" on Sunday.

"Under the influence of a Western Disturbance, isolated rainfall over plains of northwest India and adjoining central India is likely on Sunday. The predominant surface wind is likely to be coming from East-Southeast direction of Delhi with wind speed up to 20 kmph," it said.

The Commission for Air Quality Management (CAQM) on Friday directed the CPCB and the states concerned to ensure there is no lapse in the implementation of the National Green Tribunal's directions in view of the air quality scenario during the Diwali period.

"In pursuance of NGT order dated November 9 and considering the concerns of air quality scenario in the NCR and its adverse health impact, the commission directed CPCB, state governments and authorities concerned for strict compliance of the directions of NGT, with zero tolerance on the violation," it said.

The National Green Tribunal (NGT) had on Monday imposed a total ban on the sale or use of all kinds of firecrackers in the National Capital Region (NCR) from November 9 midnight to November 30 midnight, saying "celebration by crackers is for happiness and not to celebrate deaths and diseases".

A bench headed by NGT Chairperson Justice Adarsh Kumar Goel clarified that the direction will apply to all cities and towns in the country where the average of ambient air quality during November 2019 was in "poor" and above categories.

"At other places, restrictions are optional for the authorities but if there are more stringent measures under orders of the authorities, the same will prevail," the NGT had said.