A senior scientist at the Delhi Pollution Control Committee said the dip in the air quality in the city can be attributed to low wind speed and temperatures which allowed for the accumulation of pollutants in the city’s atmosphere. 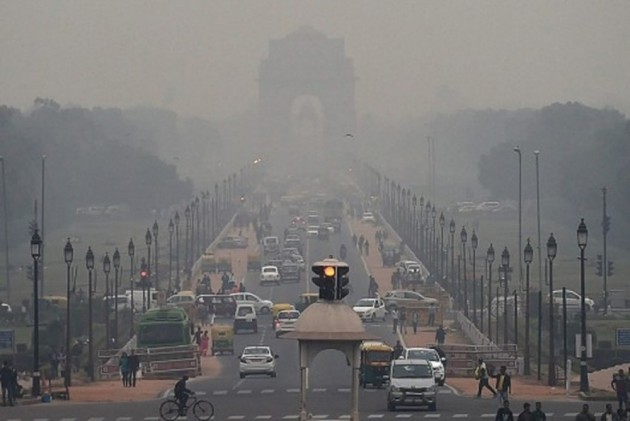 The national capital's air quality appeared in the “very poor” category on Tuesday morning, the first time this season, with calm winds and low temperatures allowing accumulation of pollutants.

According to the Ministry of Earth Sciences' Air Quality Early Warning System for Delhi, an increase in farm fires in Punjab, Haryana is impacting the air quality in Delhi-NCR.
The city recorded an air quality index (AQI) of 304 at 9:30 am, which falls in the “very poor” category. The 24-hour average AQI was 261 on Monday, the worst since February. It was 216 on Sunday and 221 on Saturday. Wazirpur, Vivek Vihar and Jahangirpuri recorded the highest pollution levels in the city with AQI ratings of 380, 355 and 349 respectively.

A senior scientist at the Delhi Pollution Control Committee said the dip in the air quality can be attributed to low wind speed and temperatures which allowed accumulation of pollutants. “Stubble burning has also increased in neighbouring states. Also, the ventilation index is low,” he said.

Ventilation index is the speed at which pollutants can get dispersed through air. A ventilation index lower than 6000 sqm/second, with average wind speed less than 10 kmph, is unfavourable for dispersion of pollutants.

PM10 levels in Delhi-NCR stood at 300 microgram per cubic meter (µg/m3) at 9 am-- the highest this season so far, according to CPCB data. PM10 levels below 100 µg/m3 are considered safe in India.

PM10 is particulate matter with a diameter of 10 micro-meters and can be inhaled. These particles include dust, pollen and mould spores. The levels of PM2.5 – finer particles which can enter the bloodstream – were recorded at 129 µg/m3. PM2.5 levels up to 60 µg/m3 are considered safe.

NASA's satellite imagery showed a large cluster of fires near Amritsar and Firozpur in Punjab and in Patiala, Ambala and Kaithal in Haryana. According to the System of Air Quality and Weather Forecasting and Research, farm fires contributed 3 percent of particulate matter to Delhi's PM2.5 concentration on Monday.

Low temperatures and stagnant winds help in accumulation of pollutants near the ground, affecting air quality. With Delhi-NCR bracing for months of poor air quality, experts have warned that high levels of air pollution can aggravate the COVID-19 pandemic.

Severe air pollution in Delhi is a year-round problem, which can be attributed to unfavourable meteorological conditions, farm fires in neighbouring regions and local sources of pollution.

According to an analysis by the Council on Energy, Environment and Water, a Delhi-based think tank, vehicular activities contributes the most -- 18 to 39 percent -- to Delhi's air pollution. Road dust is the second largest source of air pollution in the city (18 to 38 percent), followed by industries (2 to 29 percent), thermal power plants (3 to 11 percent) and construction (8 percent).

This year, the Delhi government has launched a massive anti-air pollution campaign-- “Yuddh Pradushan Ke Viruddh,” which is being led by Chief Minister Arvind Kejriwal and Environment Minister Gopal Rai. A “green war room” with a 10-member expert team has been set up at the Delhi Secretariat to monitor the steps being taken to deal with high levels of air pollution during winters.

The government will also start the spraying of “Pusa bio-decomposer” solution in non-basmati rice fields in the national capital, on Tuesday. The solution, experts say, can turn stubble into manure in 15 to 20 days and therefore, can be an effective alternative to stubble burning.

Starting October 15, stricter measures to fight air pollution will also come into force in Delhi and its neighbourhood as part of the Graded Response Action Plan, which was first implemented in Delhi-NCR in 2017.